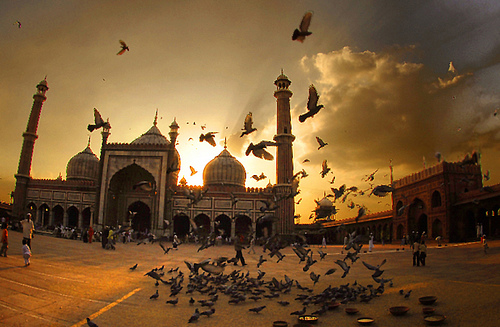 When Narendra Modi, the Prime Minster of India made the now-famous remarks about Indian Muslims being “patriotic” and “immune to al-Qaeda”, he was speaking more to his American audience than Indians.

Denied Visa for a long period of time, he needed to convince Americans that his views about Muslims in India are not what have been projected in the American media. But his remarks have led to a curious new debate. Many Indian writers including the Muslim writers, who find a place in the mainstream media, have tried to explain the non-radicalization of Muslims on various grounds.

Some of these grounds may be true, but the bigger truth is that these analysts are discussing the issue based on the Western mindset and their theories of violence. They are talking of Indian Muslims not getting “radicalized” as if the whole of the rest of the Muslim World is radicalized. The truth on the contrary is that even from Western points of view, which views violence as bad only if it is targeted against the West, the overwhelming majority of the Muslim countries and the overwhelming global Muslim population have not engaged in violence despite severe provocation from the forces of the globalization led by the West.

Out of more than 50 Muslim countries, “terrorism”, the kind of violence West loathes, has affected less than a dozen countries, 5-6 in a major way. Indonesia, Malaysia, the erstwhile Soviet Union countries like Azerbaijan, and Uzbekistan, Turkey, Bangladesh, Indonesia, and many other countries have none or a few incidents of terrorism. Much bigger kinds of terrorism has been witnessed by Sri Lanka in the last 3 decades, and Indian terrorism is mainly a non-Muslim phenomenon involving Naxalites, Ulfa, Bodos, Sikhs, Tamils and Maoists, most of them being born as Hindus.

It can be easily seen that terrorism in Muslim countries is born out of anger against the West, which has continuously tried to keep its puppets in power in those countries against the wishes of the people. Terrorism has obviously been directly proportional to the Western involvement. This is true for Afghanistan, Pakistan and Most Arab countries. Moreover, all the major “terrorist outfits” have been the friends of the West in the past. Al-Qaedah was a close friend when it was fighting the Russians along with Talibans. ISIS too was a friend till it was fighting the Syrian government. Where from did ISIS get its heavy weaponry? Of course, most of it came from West or Western allies in the region. If even now, America is not launching a full-fledged onslaught on ISIS, it is simply because ISIS is expected to put pressure on Syrian regime. Till Syrian regime does not wilt under ISIS pressure, ISIS will remain a friendly enemy.

If Indian Muslims have not radicalized, it is chiefly because India has remained free of Western intervention, and Indian polity, despite its recurrent communal ups and downs, has largely remained plural in nature. If Indian Muslims ever get radicalized, it will be due to Indian issues and not the ones that interest West. If however, West succeeds in pulling India into its own wars, which Obama tried during his talks with the Indian Premier; India may also go the Afghanistan or Iraq way. But Indian Muslims are confident that sanity will continue to prevail in Indian polity, and India will not join the Western aggression against Muslim countries. India recognizes it well that in the longer run Muslim countries, with their enormous wealth and population, can be of greater economic interest to India.

I have been incessantly arguing the fact that West’s categorization of violence has nothing to do with the magnitude of the violence. Only the kinds of violence that are targeted against Western interests are condemnable in its view. Where violence is targeted against the enemies of West, the terminology immediately changes. It then becomes either a “war against terror” or a “rebellion against an oppressive regime”.

The Muslim writers in the Western media are of course over-awed by the Western ideologies. Many of them are part of their plans. Instead of asking questions to West, they are busy answering their question in a way, which suits their masters. For well over a decade, the global media is discussing the role of Islam and Muslims in violence. But nobody questions the role of West and its ideologies. People blame “Jihad” or “Jihadism,” for violence but nobody bothers to challenge the military ideology of West, its use of violence to perpetuate its hegemony, its readiness to wage wars on the slightest pretext, its continuous arming of the rebel group, its sordid machination in the Muslim countries, and its own record in all kinds of violence. Nobody asks them “How come West killed 2 million innocent Muslims when al-Qaedah did not kill even 6000 Western innocents?” Nobody asks them about their own ever-rising crime rates, killing of millions of foetuses, their own statistics of suicides and their own wars against other countries and instigation of rebellions against the regimes they do not like. Nobody questions their resolve to help Israel even if it is killing women and children in thousands.

The time has come now when all the right-think intellectuals ask the West to stop talking about Islam’s and Muslims’ role, and instead focus on its own role. Let the global media discuss Western military ideologies in details and their roles in the destruction of human lives! Before studying Islamic Jihad, let Western philosophies of confrontation, combat and wars be discussed in all its minute details. Let this continue for at least one year before debating the Muslim factor again! Instead of criticizing the others, Let the West learn to face criticism! Let the West allow their own people to know the whole truth, rather than the truncated truth. Violence cannot minimize unless every single factor responsible is discussed and effectively addressed.

Radicalization is a universal phenomenon these days, but it is the radicalization of West, not Muslims, which is the biggest breeder of global violence.