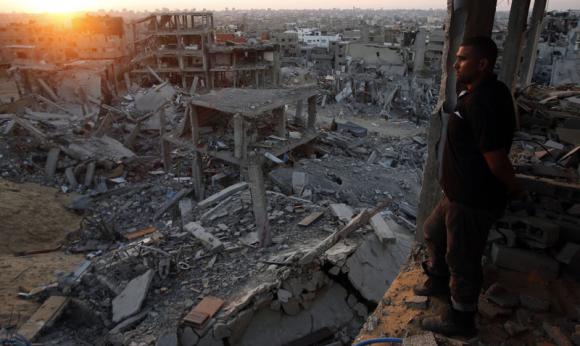 A donor conference hosted in Cairo last week to raise funds for the reconstruction of war-devastated Gaza has boasted $5.4 billion in pledges from various Western and Arab governments.

Yet Israel is the true beneficiary of this aid money. The self-declared international community has once again footed the reconstruction bill as it arms Israel with the weaponry and ensures it the impunity that only rewards its brutal onslaught on Gaza and essentially guarantees its repetition.

“This is the third time in less than six years that together with the people of Gaza, we have been forced to confront a reconstruction effort,” an exasperated US Secretary of State John Kerry stated at the conference, as though this summer’s bloodshed was something other than inevitable given all those arms Washington lavished on Israel, along with the monetary aid and diplomatic cover since the large-scale assaults in November 2012 and winter 2008-09.

Parties involved in the donor conference are making only the most minimal efforts to pretend that the priority is the survivors in Gaza, where more than one in every thousand of the nearly 1.8 million Palestinians there, most of whom are refugees, were killed.

The Palestinian Authority, based in the occupied West Bank city of Ramallah, has already announced that half of the pledges raised at Sunday’s conference will not even make it to Gaza.

Instead, those funds will be diverted to the Palestinian Authority’s budget for unspecified purposes.

Though the PA did not say how it will spend the money raised at the Gaza reconstruction conference that it earmarked for itself, “the security sector has grown faster than any other part of the Palestinian Authority” in the past decade, as noted by Sabrien Amrov and Alaa Tartir in a recent policy brief published by the Palestinian think-tank Al-Shabaka.

Last year, 26 percent of the PA’s budget was spent on security (compared with just 16 percent for education, nine percent for health and a minuscule one percent on agriculture, historically the backbone of the Palestinian economy). Forty-four percent of PA civil servants are employed in the security sector — more than any other, Amrov and Tartir point out.

The Palestinian Authority — which has already blocked efforts to bring Israeli war crimes in Gaza this summer before the International Criminal Court — is led by Mahmoud Abbas, who recently described collaboration with Israeli occupation forces in the West Bank as “sacred.”

More than forty Palestinians have been killed by Israeli forces in the occupied West Bank so far this year; fourteen were killed during the equivalent period in 2013. “Security coordination” is obviously not concerned with securing the preservation of Palestinian lives.

As pointed out by Amrov and Tartir, “the armed resistance that was once considered an inseparable part of the Palestinian struggle for self-determination is being dealt with by the PA as a form of dissent that needs not just policing but eradication and criminalization.”

The current paradigm of security coordination, state Amrov and Tartir, is “to criminalize resistance against the occupation and leave Israel — and its trusted minions — in sole possession of the use of arms against a defenseless population.”

As the Palestinian Authority which serves as the policing arm of the Israeli occupation positions itself as the executor of Gaza’s reconstruction, this will surely be used as an opportunity for those who seek to dismantle the armed resistance (which defended Gaza and demonstrated greater discipline and tactical capability than it did during any prior confrontation with Israel).

Though the PA has jockeyed for this role to sideline the Hamas leadership in Gaza, any attempts to rebuild are subject to Israel’s ultimate authority.

(It is worth noting that the Palestine Liberation Organization told the Ma’an News Agency on Sunday that no date has yet been set for implementing reconstruction projects in Gaza.)

Reminding observers who is really in charge, West Bank-based PA ministers including Prime Minister Rami Hamdallah were initially denied permits by Israel to visit Gaza, which remains under closure and economic siege imposed by Israel and enforced by donor conference host Egypt.

“More than 50 years to rebuild”

The international aid agency Oxfam warned last week that money pledged at the global donor conference “will languish in bank accounts for decades before it reaches people, unless long-standing Israeli restrictions on imports are lifted.”

As the importation of basic construction material into Gaza has been prohibited with few exceptions since 2007, and the supply tunnels under the border with Egypt largely destroyed, Palestinians are unable to rebuild.

Oxfam added that “under current restrictions and rate of imports it could take more than 50 years to build the 89,000 new homes, 226 new schools, as well as the health facilities, factories and water and sanitation infrastructure that people in Gaza need.”

No matter how much money international donors raise for reconstruction, Israel determines what gets in and out of Gaza.

Truckloads of construction materials brought in to Gaza last month were “designated for projects pre-approved by Israeli authorities and to be implemented by international organizations in Gaza,” the United Nations Agency for the Coordination of Humanitarian Affairs notes in a recent weekly monitoring report.

Israel’s total stranglehold on Gaza’s economy also applies to exports — only two truckloads of which were permitted through the Israeli-controlled commercial crossing last month, the first trucks of exports since June.

The Palestinian Boycott, Divestment and Sanctions National Committee (BNC) condemns the failure to bring meaningful pressure on Israel to end the siege that had brought the economy to its knees even before the destruction it wrought on Gaza this summer — during which 419 businesses and workshops were damaged, with 128 completely destroyed.

“Donor money pledges are no substitute for holding Israel accountable for its grave violations of international law, including war crimes and crimes against humanity, and achieving justice for the Palestinian victims,” the BNC stated on Sunday.

“Israel’s blockade and repeated military assaults against the occupied Gaza Strip are part and parcel of systematic Israeli efforts to permanently separate the tiny Gaza Strip from the West Bank and ‘get rid’ of its large Palestinian population, most of them refugees of the 1948 Nakba with unresolved rights and claims in Israel,” the statement adds.

The BNC criticizes international agencies including the United Nations and the International Committee of the Red Cross for operating “within the confines of Israel’s policy of separation and collective punishment.”

Without also adopting a comprehensive and binding military embargo on Israel, donor states, international agencies and nongovernmental organizations are complicit in an unjust and illegal policy of collective punishment, the BNC makes clear. And there is no mechanism of accountability to the Palestinian public.

Given all of these realities, it is tragic but unsurprising that young Palestinians in Gaza, facing unemployment rates as high as 60 percent, have lost hope and are putting their lives in the hands of smugglers in a bid to reach Europe and a future.

“This has never happened before … Even in the worst of times, people never considered abandoning the Gaza Strip,” Sara Roy, who has studied Gaza’s economy for three decades, told Bettina Marx in an interview for Deutsche Welle.

“The middle class has largely been wiped out,” Roy said.

Even the deliberate sinking of a ship carrying an estimated 500 passengers — many of them Palestinians from Gaza, the vast majority of whom are presumed to have drowned — off the coast of Malta last month hasn’t stemmed the mass migration from the Strip via clandestine tunnels.

In August 2012 the United Nations issued a report studying whether Gaza would be a livable place in the year 2020. But Gaza’s unlivable reality is already here.