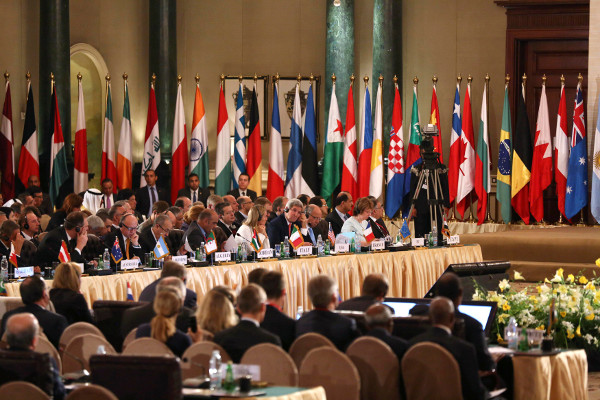 Global donors have pledged hundreds of millions of dollars in aid to the devastated Gaza Strip amid warnings that the battered Palestinian enclave remained a “tinderbox” following its summer war with Israel.

The Palestinians at Sunday’s conference in Cairo asked for up to $4bn in international aid to reconstruct Gaza devastated by Israel’s assault in July and August.

Qatari Foreign Minister Khalid al-Attiyah, who is in the Egyptian capital for the conference, announced his country was pledging $1bn in aid to the besieged strip.

Washington promised $212 million to meet what Secretary of State John Kerry described as an “enormous” challenge in Gaza.

Kerry also urged renewed peace talks between Israel and the Palestinians, telling the conference that both sides needed to be helped to make “tough choices” for lasting stability.

“The people of Gaza do need our help, desperately, not tomorrow, not next week, they need it now,” Kerry told the gathering of some 30 global envoys and UN chief Ban Ki-moon.

There is widespread concern that – after three destructive conflicts in the past six years – any help to Gaza will eventually be lost in the enclave’s cycle of violence.

Ban expressed the fears of many when he told the conference the situation in Gaza remained potentially explosive.

The Palestinian government unveiled a 76-page reconstruction plan ahead of the conference, with the lion’s share of assistance to build housing.

Kerry was due later to meet Abbas to press for further peace efforts. Sources say that he is also expected to meet the Qatari foreign minister.

Kerry’s pursuit of a long-elusive peace treaty between Israel and the Palestinians collapsed in April after a difficult nine-month process.

There was little prospect of fresh talks any time soon.

Israel and the Hamas fighters who dominate Gaza have yet to even translate their temporary August truce into a long-term ceasefire.

This summer’s conflict killed nearly 2,200 Palestinians, mostly civilians, while attacks by Gaza fighters killed 73 on the Israeli side, mostly soldiers.