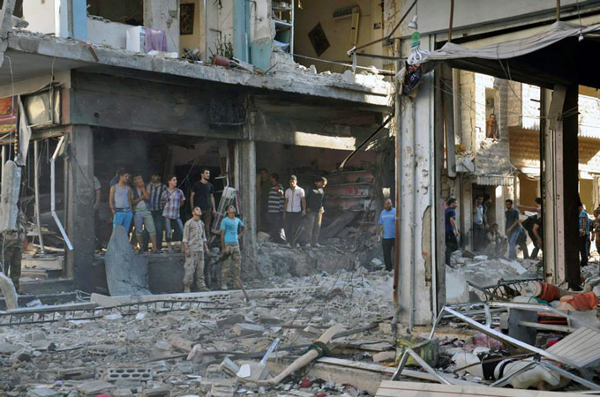 At least 10 children are among 22 people killed in a twin bombings outside a primary school in the government-controlled city of Homs in central Syria.

A Syrian pro-government channel broadcast on Wednesday brief footage of the aftermath, showing parents looking for their children and schoolbags and bloodstains on the ground. Flames rose from a car nearby.

Homs governor Talal Barazzi described the attack as a “terrorist act and a desperate attempt that targeted school children”.

The blasts happened as children were leaving the Ekremah al-Makhzoumi primary school, said an official with the Homs governorate who refused to be named.

The first explosion was from a car bomb parked and detonated in front of the school, followed minutes later by a  who drove by and detonated his explosives-laden car, said the anonymous official.

It was one of the deadliest attacks in Homs in months. At least 56 more people were wounded in the incident, the official said.

There was no immediate claim of responsibility for Wednesday’s attack, but Syrian rebels fighting to oust Assad have carried out such bombings during the country’s civil war.

There have been horrific attacks against civilians by all sides throughout the brutal conflict, now in its fourth year, but rarely have children appeared to be the direct target.

In May, Syrian government forces dropped a bomb in the northern city of Aleppo, hitting a complex that held a school alongside a rebel compound.

At least 19 people, including 10 children were killed in that attack.