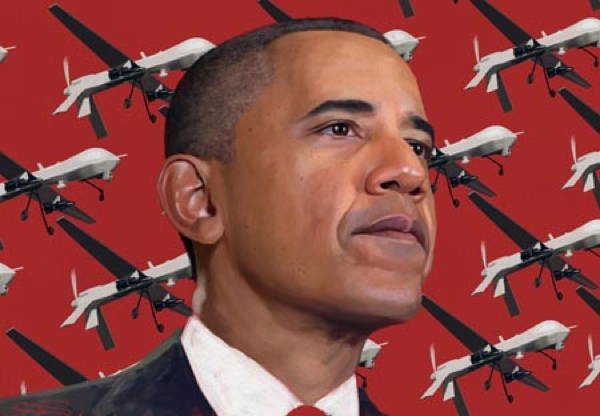 There is huge difference between “We” and “They”. This instinct is omnipotent. But when this instinct stings the mighty “we” is ready to kill “they” if “they” even dare to stare at “we”. What “we” do is always right, and what “they” do, unless approved by “we” is never right. If “they” behead half a dozen, they are cruel and barbaric, if we bombard millions to death, “we” are “peace-loving” and “civilised”. Beheading is brutal because it is “their” method; bombardment is civilised because it is “our” method. Nothing to do with the truth that the swords can behead dozens or hundreds and the bombs can destroy millions.

Obama’s theory of answering beheading with bombing is nothing new. America has been doing this for long. For America, nothing else matters than its interests. It has mastered the art of categorizing violence. Any violence caused by its ideologies and its forces is “necessary” or “collateral damage”, any violence which may even appear to be linked with other ideologies or forces is brutal and unacceptable. When ISIS was indulging in violence against Syrian government, its beheadings did not sound that brutal, as they sound now because now these beheadings have become a pretext to take control of Middle East. If Assad could not be defeated through rebels, it is time to defeat him through direct intervention.

Only a moron would condone ISIS. But how can the crimes of ISIS be compared with the carnages, massacres and genocides by America, Israel and their allies? The whole world is being made to believe, with renewed vigour, that people claiming to be the followers of Islam, are indulging in terrorism posing threat to the whole mankind. And through this propaganda they make all the Muslims suspicious. But there is no one to tell the truth that if “Muslim” terrorists have killed a few thousand Westerners, West has killed more than 2 million innocent Muslims. Should Muslims also start becoming suspicious about every Westerner? Fortunately, their religion has taught them to differentiate between the perpetrators and the ordinary people. Most of them have so far been true to their faith. Some have gone astray, but their misdeeds are only an immoral reflection of their genuine grievances and anger. Let West also understand that violence breeds violence, and ultimately it is the amount of violence which determines which is crueller than the rest. War is much bigger terror than “terror”. Let them understand fast that through sustained hostility they cannot win peace. Peace with Muslims can be achieved only through proper understanding of their ideological positions on various issues and their genuine grievances and finding solutions on the basis of mutual respect. Once they are ready to accept the facts, they will be able to understand that enforcement of false ideologies for economic ends through bombs cannot bring true peace and comfort to mankind.

Let the international media focus with the same intensity on crimes by West and their allies against Muslims as they do on the crimes by ISIS! Let the media visit the homes of the Palestinian and children that were bombarded into everlasting silence by the bombs of Israel, which had the stamp of the US! Let the global community hold memorials for the dead of Afghanistan and Iraq the way they hold for the victims of 9/11!. Let the international focus on the role of America and its allies rather than the “terrorists” in killing humans! Let them give a daily account of how many have been killed by “terror” and how many by the “war against terror”! Let us stop ccategorizingviolence on the basis of our interests! Let every act of violence be condemned, whatever the pretext, whoever the victim, whoever the perpetrator, whichever the place!