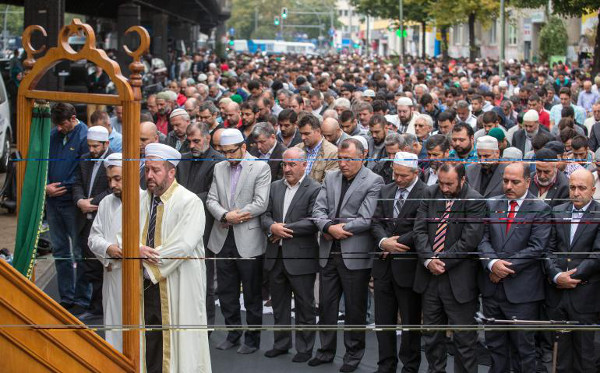 Muslim organizations in Germany have held rallies in 2,000 mosques nationwide in protest against the ISIL and racist attacks targeting mosques and synagogues.

Germany’s Muslim community staged the rallies on Friday as part of the campaign Muslims Standing Against Hate and Injustice aimed at renouncing all kinds of violence and raise awareness for growing racism.

Bekir Alboga, the board member of the largest Muslim organization, Turkish-Islamic Union (DITIB), said on Friday during a rally in Berlin, in front of the Mevlana Mosque: “We are witnessing today how some people are committing atrocities, driving people from their houses, torturing and murdering them in the name of Allah.

“Those people use the symbol of Prophet, but with their actions they show that they have not understood a word of what Allah has revealed to us.”

About 1,000 Muslims gathered on the street for Friday prayer outside the mosque which was extensively damaged in an arson attack in August 11.

German politicians, intellectuals and priests joined the rally to show their solidarity with the Muslim community.

The co-president of Germany’s Green Party, Cem Ozdemir, was among the participants.

“We have join our forces, act together against them.”

“Muslims are saying that, without ifs and buts, terror and Islam can never be together. And we also believe in that,” Schneider said.

He called on all religious comminutes to organize a joint campaign to protest against hate and terrorism.

He said: “Today, Muslims demonstrate that hate and violence can never be legitimized in the name of Islam.”

He denounced recent attacks targeting mosques or synagogues in Germany.

Five mosques were attacked across the country last month alone.

“Attacks on houses of worship, regardless of which faith they belong to, are attacks on all of us,” de Maiziere said.

He called on Muslims to support security organizations in their struggle against extremists.

Reports of violent murders and atrocities committed by the ISIL have sparked suspicion and negative feelings towards Muslims across Germany.

German security organizations estimate that about 400 Germans, mostly young immigrants, have travelled to Syria and joined ISIL since the beginning of the civil war in Syria.

Germany’s Muslim organizations underline that the source of the radicalization of some young immigrants is not Islam itself, but the sociological problems they face such as discrimination, unemployment, or lack of future perspectives.