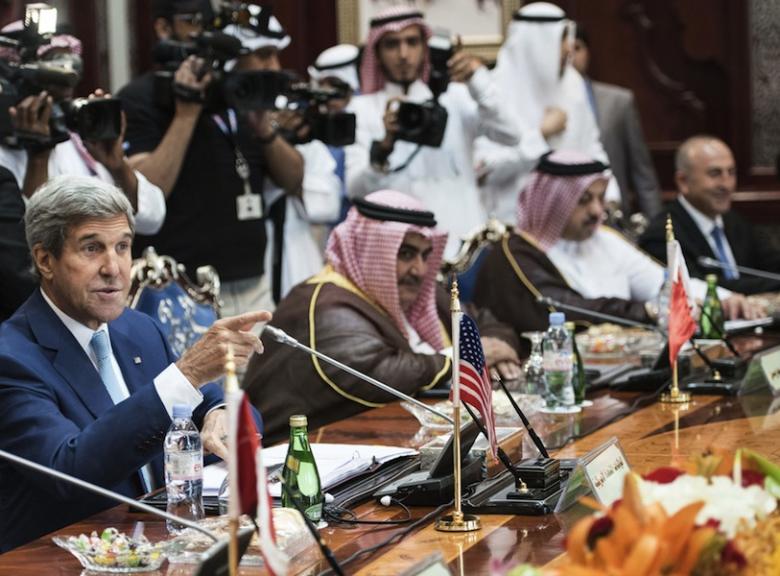 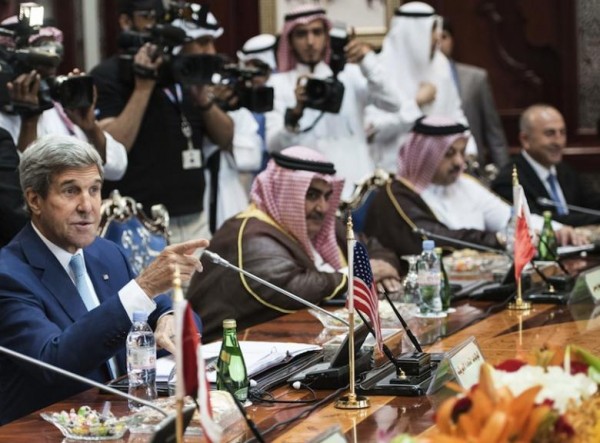 A coalition of 10 Arab states threw their support behind Barack Obama’s pledge to destroy the Islamic State in Iraq and the Levant (Isil) movement in Iraq and Syria on Thursday.

In a welcome boost to US plans for defeating the militant Islamist group, regional powers including Saudi Arabia and Jordan pledged to “do their share” in the battle.

The announcement in Saudi Arabia was carefully choreographed, coming hours after the president told the American people that he would expand US air strikes against the militants, promising that Isil would ultimately be “vanquished from the Earth”.

As Mr Obama marked the anniversary of the September 11 attacks with a moment of silence at the White House, the 10 regional allies — which also included Bahrain, Egypt, Iraq, Kuwait, Lebanon, Oman, Qatar and the United Arab Emirates — issued their statement after a meeting in Jeddah with John Kerry, the US secretary of state.

They promised that they would join in “the comprehensive fight” against Isil, including choking off funds and fighters to the group.

Despite the formal show of support, Mr Obama’s call for Middle Eastern countries to join wholeheartedly in the battle to defeat Isil still faces multiple headwinds, including the threat of a militant reaction against Saudi Arabia.

Officials in Turkey, which was also represented and could play a vital role in stopping fighters, arms and finance crossing the porous border with Syria, said they would not allow offensive operations to be launched from their territory, including the major US base in southern Turkey at Incirlik.

Mr Kerry is due to arrive in Ankara, the Turkish capital, on Friday as part of a diplomatic effort to strengthen the resolve of the country, 46 citizens of which are being held hostage by the militants.

At the same time, Russia and Iran, who had silently aligned with the US in demanding that Iraq’s divisive former prime minister, Nouri al-Maliki, stand aside, both criticised Mr Obama’s decision to expand the US air campaign to include targets in Syria.

A Russian foreign ministry spokesman said any strikes on Syrian territory without UN authorisation would be an “act of aggression, a gross violation of international law”.

Mr Kerry shrugged off the Russian complaint as laughable, adding he was surprised that Russia would “dare to assert any notion of international law” after recent events in Crimea and Ukraine.

Mr Obama laid out a four-point strategy to “degrade and ultimately destroy” Isil in which an expanded US air campaign, aided by nearly 1,000 US military advisers on the ground, would enable local Iraqi and Syrian rebel forces to “go on the offence” against the militants.

“American power can make a decisive difference, but we cannot do for Iraqis what they must do for themselves, nor can we take the place of Arab partners in securing their region,” the president said in a prime-time televised address from the White House.

Officials said that Saudi Arabia will host training camps for up to 10,000 “moderate” Syrian rebel fighters who Obama administration officials ultimately hope will hold any territory reclaimed with the aid of US air power.

Last night a spokesman for the CIA said the latest intelligence assessment suggested that Isil could muster between 20,000 and 31,500 fighters across Iraq and Syria, up from a previous estimate of 10,000.

The new assessment is based on a review of intelligence reports from May to August. It is larger than the 20,000 figure being used by many outside experts.

The Saudi decision to ally openly with the US in the fight against Sunni militants has revived fears over the terrorist threat to the kingdom, the spiritual heart of the Muslim world. Analysts also warned that many questions remained over the practicality of Mr Obama’s plan to bolster the rebel fighters — an idea about which he was openly sceptical only two months ago, dismissing it as a “fantasy”.

Frederic Hof, a former special adviser to the Obama administration on Syria and now senior fellow at the Rafik Hariri Centre for the Middle East, said it remained unclear if Mr Obama was serious about entering the Syrian conflict, rather than engaging in isolated strikes on Isil there.

“For a White House accustomed to micromanagement and the managing of messages, this is unfamiliar terrain,” he warned. “The coalition will need constant tending: it contains oarsmen not accustomed to pulling in the same direction.”

Theodore Karasik, research director of the Institute for Near East and Gulf Military Analysis in Dubai, warned that Saudi leaders would react badly to any signs of hesitation. “If there is any hint of retreat by the Obama administration, the Saudis will be furious and may take matters in to their own hands.”

Saudi Arabia’s request for American troops to defend the kingdom against Saddam Hussein after the invasion of Kuwait in 1990 was the original cause cited by Osama bin Laden for his war on his homeland and on the West.