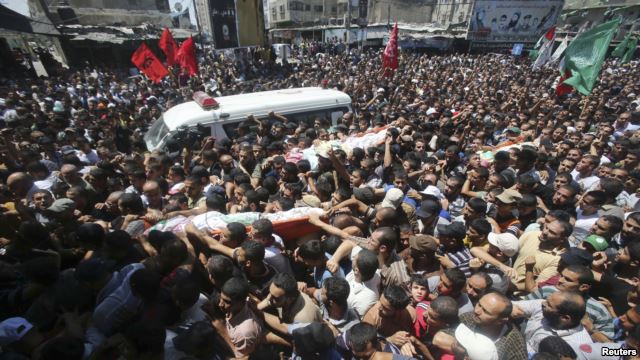 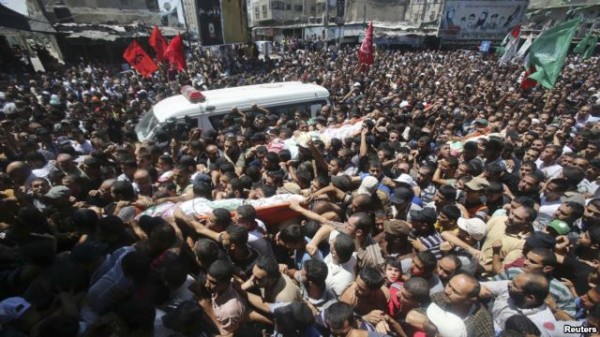 The Israeli military said its forces pounded rocket installations in the Gaza Strip as dozens of rockets landed in southern Israel.

Israel said more than 200 Hamas rockets had been fired at Israel and its forces had targeted more than 100 rocket installations in Gaza since a temporary cease-fire collapsed on Monday.

Hamas identified those killed as Mohammed Abu Shamaleh, Raed al-Attar and Mohammed Barhoum. Israeli Defense Minister Moshe Yaalon said the three “were responsible for deadly attacks” against Israel, including the killing of Israeli soldiers and the 2006 kidnapping of soldier Gilad Shalit.

Yaalon called the assassination of the three commanders “a very important intelligence and operational achievement by the Israeli army and the Shin Bet security service” and that Israel would continue to target other Hamas leaders.

The funeral procession for the commanders drew thousands of Palestinians into the streets of Gaza, with some firing guns into the air. Hamas spokesman Sami Abu Zuhri said the successful Israeli attack would not deter the militants.

“The assassination of the al-Qassam leaders in Rafah is a big Israeli crime that will not succeed in breaking the will of our people and won’t weaken the resistance. And the occupation will pay the price, God willing,” he warned.

Following a meeting of his security ministers Wednesday night, Israeli Prime Minister Benjamin Netanyahu told a news conference that the operation against Gaza would continue. He said only the guarantee of the calm and safety of Israeli citizens will bring an end to this operation adding that “therefore we are talking about a long and continuing campaign.”

Netanyahu said Hamas leaders were not only legitimate targets but targets of high priority.

Hamas spokesman Sami Abu Zuhri retorted that the threat reflected the extent of Israel’s violence and lack of seriousness in achieving a cease-fire.

He said the threats would not frighten Hamas leaders and that “on the contrary, we will continue to protect and defend our people in facing Israeli crimes.”

Each side accuses the other of breaking the temporary cease-fire Monday after 10 days of negotiations and calm.

Some progress had been reported in the talks, brokered by Egypt, to discuss a permanent truce. But the two sides remained far apart on their principal demands.

Hamas wants Israel to end the seven year-old blockade of Gaza while Israel wants all militant groups in Gaza to disarm.

The United Nations Security Council expressed “grave concern” Wednesday at the resumption of violence, which had paused for a 10-day cease-fire and peace talks. All 15 council members urged both sides to again halt the fighting and return to negotiations on a long-term truce.