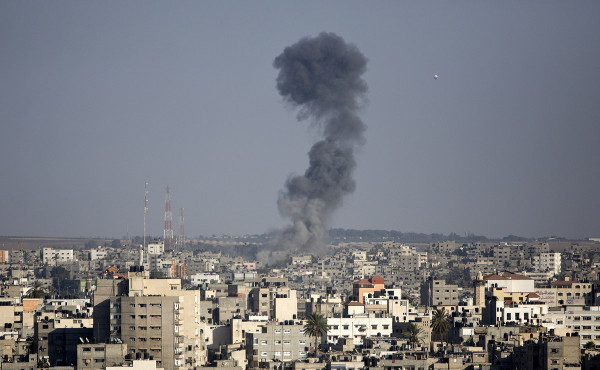 Israel’s military said it carried out a series of airstrikes on “terror targets” in response to rockets fired from the Gaza Strip, with both attacks putting the Egypt-mediated peace talks in jeopardy.

The violence Tuesday came as the sides were holding indirect talks in Cairo in a bid to extend a temporary Gaza cease-fire into a more lasting truce.

After the rocket fire, Israeli Prime Minister Benjamin Netanyahu told his negotiators to return home. However, there was no word from Israel whether the move spelled the collapse of the talks.

In a statement Tuesday, the Israeli military accused Palestinian militants of violating a cease-fire by firing three rockets at Israel. Authorities said the rockets landed near the city of Beersheba and caused no injuries.

There was no immediate claim of responsibility for the rocket attack. However, Sami Abu Zuhri, a spokesman for Hamas, the dominant movement in the Gaza Strip, said it had no knowledge of any rockets being fired, Reuters reported.

Two children were wounded in those strikes, hospital officials said. Thousands of Palestinians fled their homes in Gaza City, carrying clothes, pillows and mattresses as they headed to shelters in schools run by the United Nations.

Palestinian witnesses and security services reported one Israeli airstrike hitting open ground in northern Gaza, causing no injuries or damage in what was the first such raid in five days.

Reuters witnesses in Gaza City said they heard the sound of rockets being launched from the Palestinian enclave.

Israeli government spokesman Mark Regev blamed Hamas for the end to nine days of relative calm in the skies over Gaza.

Earlier, Palestinians had warned of renewed violence if Hamas and Israeli officials could not agree to a deal before Tuesday’s midnight truce deadline.

The two sides are holding intense, indirect talks in Cairo after agreeing Monday to a 24-hour cease-fire extension, the third such truce in 10 days.

The chief Palestinian negotiator, Azzam al-Ahmad, said Tuesday the “cycle of violence” will continue in the Gaza Strip if the talks do not succeed.

“We agreed to the cease-fire for just one day, just one day. Tomorrow, we will agree or we will not agree. We hope to use every minute of the next 24 hours to reach an agreement, or else the cycle of violence will continue,” Admad said on Monday.

The announcement of the extension Monday came just minutes before the cease-fire was set to expire at midnight local time.

There was no indication that negotiators are close to reaching a deal to stop more than a month of fighting between Israel and Hamas, which runs the coastal enclave along the Mediterranean.

Egyptian mediators have been conducting indirect negotiations, carrying truce proposals back and forth between the Israelis and the Palestinians. Israel has refused direct talks because the Palestinian delegation includes Hamas, which it considers a terrorist group.

The gap between Israel and the Palestinians remains wide, with Israel demanding the disarming of Hamas and an end to its cross-border rocket attacks. The Palestinians are calling for the end of Israel’s eight-year blockade of impoverished Gaza.

The five weeks of fighting have left more than 2,000 people dead, most of them Palestinians. It also has left Gaza neighborhoods in rubble from Israeli airstrikes. Sixty-seven Israelis have also been killed. All but three were soldiers.

Norway said once a lasting truce is reached, it will host a conference with Egypt to look for international donors to rebuild Gaza.

Some information for this report provided by Reuters, AP and AFP.