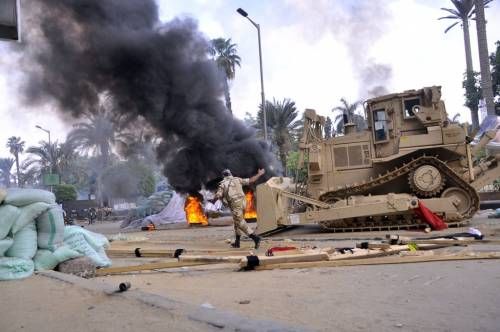 PRESIDENT OBAMA insists that it is in the U.S. interest to maintain a strategic partnership with Egypt’s new authoritarian government, while Secretary of State John F. Kerry keeps claiming that strongman Gen. Abdel Fatah al-Sissi actually heads a democracy. So the reality check provided by Human Rights Watch this week is particularly worthy of attention. According to a meticulous, year-long investigation carried out by the group, the administration’s ally in Cairo is guilty of the “world’s largest killings of demonstrators in a single day in recent history” and deserves prosecution for crimes against humanity.

Don’t expect the U.N. Human Rights Council or the Europeans marching against Israel to notice, but the massacre staged by Egyptian security forces on Aug. 14, 2013, in Cairo’s Rabaa Square far exceeds, in its wanton use of force and calculated slaughter of women and children, any action by Israel during the recent fighting in Gaza. According to the Human Rights Watch investigation, at least 817 people, and probably more than 1,000, were killed when police and army troops advanced into the square from each of its five main entrances, backed by armored personnel carriers, bulldozers and snipers posted on rooftops.

Tens of thousands of people, including many women and children, were camped in the square in protest of the military’s July 3 coup against the elected government of Mohamed Morsi. Twelve hours later the area was littered with bodies and its mosque and hospital were on fire. In addition, security forces detained more than 800 people, whom they beat, tortured and in some cases summarily executed, according to witnesses interviewed by Human Rights Watch.

Perhaps the most shocking finding of the report is that senior Egyptian leaders anticipated and planned on the mass casualties. Interior Ministry officials told human rights workers nine days before the operation that they expected up to 3,500 deaths. A year later, authorities deny any wrongdoing and have not charged a single police or army officer in connection with the killings. On the contrary, a monument celebrating the security forces has been erected in Rabaa Square. Human Rights Watch’s lawyers believe that more than a dozen senior officials who ordered or oversaw the operation should be investigated for crimes against humanity, including Gen. Sissi.

More people died on Aug. 14 in Rabaa Square than in Beijing’s Tiananmen Square in 1989 or in any mass killing of protestors since then, the human rights group reckons. In the last 12 months the most repressive regime seen in Egypt in decades has taken hold; thousands of members of the opposition Muslim Brotherhood have been handed death sentences, while secular journalists and leaders of Egypt’s pro-democracy movement have been imprisoned on trumped-up charges.

The Obama administration nevertheless treats the architect of the slaughter, Gen. Sissi, as a valued partner rather than the pariah he should be. The White House seems to believe that its unprincipled embrace of the regime and cynical promotion of the falsehood that it is “restoring democracy” will advance broader U.S. interests in the Middle East. It’s a bad bet. As Human Rights Watch President Kenneth Roth put it, “Egypt will not move forward until it comes to terms with this bloody stain on its history.”