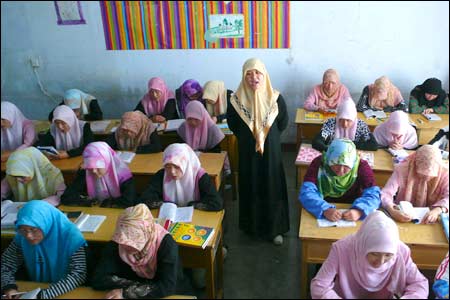 The road to Linxia, in China’s vast, sere northwest, is known locally as the Quran Belt, with a profusion of newly built mosques and Sufi shrines lining the motorway. Some are built in a traditional Chinese style, with pagoda-like eaves; others, with their green tiled domes, echo Middle Eastern architecture.

With violent unrest affecting northwestern Xinjiang, a spotlight has been cast on that area’s Muslim Uighurs, who have long chafed at rule from Beijing. But the Uighurs, some of whom yearn for autonomy from the People’s Republic, are not the biggest Muslim population in China, which has more adherents to Islam than the European Union. That distinction belongs to the Hui, a 10.5 million-strong group that is also the second largest of China’s 55 officially recognized ethnic minorities. One of the Hui centers of Islamic learning is the Wild West town of Linxia, in Gansu province, where Sufi traditions remain vibrant.

With the bloodshed in Xinjiang escalating — the most recent clash late last month, which the Chinese government labeled a “violent terrorist attack,” saw nearly 100 people killed, according to an official count — authorities have intensified a crackdown on spiritual expression by Uighurs. (Tibetans face religious repression too as their disenchantment with Chinese rule grows.) But this does not mean that Beijing is curtailing Islam nationwide. Indeed, members of the Muslim Hui community are enjoying a flowering of faith in what is, officially, still an atheist communist nation.

Linxia’s Islamic places of worship are just one symbol of this religious boom. Ismail, a Hui who works for a state-owned enterprise in the Ningxia autonomous region, says he openly practices his faith. “Of course, I fast during Ramadan,” he says. “All my Hui friends do it, too. It’s our obligation as Muslims.” But a Uighur college student says he and his classmates were not allowed to do the same. “[Han university authorities] make sure we eat at the cafeteria. They say they don’t want us to be tired, but I don’t believe them. It is because we are Uighur.”

Hui participation in the hajj pilgrimage to Mecca has increased over the past several years, say scholars. Another sign of renewed religious commitment: Ismail says he has noticed more Hui women in his hometown wearing veils in recent years. “As more Hui women receive education, they learn more about their own identities,” he says. “As a result, they realize the protection brought by Islam and are starting to wear veils more.”

By contrast, a local paper in the Xinjiang town of Karamay reported last week that residents with long beards, headscarves, veils and clothing with an Islamic crescent moon and star would not be allowed to board public buses while the city played host to a sporting event. In Kashgar, a Silk Road outpost that is a repository of Uighur culture, the local government has promoted a campaign called Project Beauty that urges Uighur women to “show your pretty faces and let your beautiful hair fly in the wind.” Uighurs also have a hard time getting passports to travel abroad, especially to go on the hajj.

“It’s not an issue of freedom of religion,” says Dru Gladney, one of the foremost academics studying Chinese Muslims. “Clearly, there are many avenues of religious expression that are unfettered in China, but when you cross these very often nebulous and shifting boundaries of what the state regards as political, then you’re in dangerous territory. Obviously this is what we see in Xinjiang and in Tibet.”

Unlike Tibetans or Uighurs, who speak a Turkic language and are racially distinct from the Han, the Hui are not agitating for increased autonomy, much less a split from China. One reason may be influenced by geography. While Uighurs are concentrated in Xinjiang, and Tibetans clustered on the high plateau in far western China, the Hui are spread out across the nation. True, Ningxia Hui Autonomous Region is dedicated to them, but Hui communities exist in practically every major Chinese city. A significant population lives in Beijing.

Racially and linguistically, the Hui — whose ancestors include Persian, Central Asian and Arab traders who plied the Silk Road and intermarried with local Chinese — are virtually indistinguishable from China’s Han majority. Often, it is only the presence of a white prayer cap that differentiates a Hui man from his Han counterpart. Partly because of their cultural affinity to the Han and their geographic dispersal, the Hui are far more integrated into mainstream Chinese life than those ethnic minorities living in China’s borderlands.

“The way [the government treats] the Uighurs and the Hui is completely different,” says a foreign scholar who studies the Hui, requesting anonymity. “The standard line for the Uighurs is that everything is oppression and violence and conflict, and the standard narrative for the Hui is that they are complicit with state power and that they are not real Muslims. The Hui are considered the good Muslims and the Uighurs the bad Muslims.”

That division has implications for the future of Xinjiang, which was once predominantly Uighur but has played host to waves of government-encouraged internal migration. While many of the recent arrivals who work at military or state-owned farms and mines are Han, other newcomers are Hui. China’s 2010 national census recorded 983,015 Hui in Xinjiang, up from 681,527 in the 1990 count. During the 2009 rioting in Xinjiang’s capital Urumqi that killed around 200 people, one reported refrain from extremist Uighurs spread across social media: “Kill the Han, kill the Hui.”

The Hui’s forebears include a long line of military generals loyal to imperial Chinese governments. (There were, however, Hui rebels who battled the late Qing dynasty from a base in Ningxia.) The Hui also excelled at trading, a talent which spread their numbers across China. Even in Lhasa, the capital of Tibet, many trinket stores and restaurants near the main city square are now owned by Hui merchants. The Hui, along with the Han, were targeted when ethnic violence broke out in Tibetan regions in 2008. Indeed, ancient history in China’s far west is filled with battles between Tibetans, Uighurs, the Hui and the Han, with borders and allegiances shifting like desert sands. Animosities endure. “Post-2008 [violence in Tibet] and 2009 [bloodshed in Xinjiang], it’s like it’s every group for themselves,” says the foreign Hui scholar.

External influences are also becoming more important in Chinese Islam. The proliferation of Middle Eastern–style mosques in Linxia mirrors the rise of purist Salafi Islam across the world, from Indonesia to North Africa, in which a unified faith trumps indigenous variations. “In China, the Hui have extraordinarily illustrated this beautiful accommodation between Chinese culture and Islam,” says Gladney, who teaches at Pomona College in California. “But with the rise of social media and an idea of one Islamic world, this historic accommodation is being debated.”

Gladney notes that Hui clerics have studied at Egypt’s al-Azhar University, one of the world’s most important centers of Islamic learning, while around 300 Hui live in the holy Saudi Arabian city of Medina. “For 1,300 years, the Hui have been able to not only survive but thrive,” says Gladney. “But we have to also remember that revolutions in Chinese Islam have tended to come from increased communication and travel abroad, and we’re in a period where the Hui with the right connections are doing just that.”