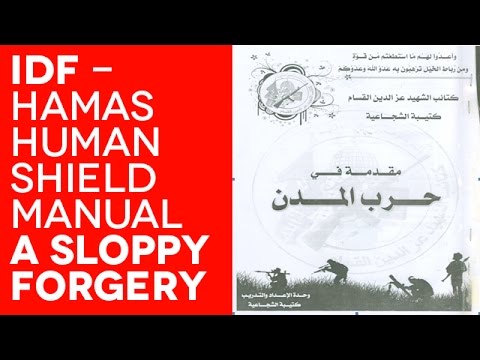 On August 4, 2014 the IDF released what they claimed to be scans of a captured Hamas combat manual which explains the benefits of human shields (Captured Hamas Combat Manual Explains Benefits of Human Shields). This juicy story got quite a few people excited, and within 2 days their blog post had over 81,000 likes on Facebook. It turns out though, that the documents that they uploaded were forgeries, and sloppy forgeries at that. The work was so shoddy that you don’t even have to be an expert to see the mistake. Let’s take a a look.

[UPDATE August 8th] After reading some of the comments I realized that I shouldn’t have taken for granted that people would understand how to properly assess the alignment of a font. To clarify, I have uploaded the PSD file that I used to measure the position of the fonts. It is important to make sure that you are measuring from the BASELINE of the font (see image below), and that you distinguish between the font baseline and aliasing (partially faded pixelation) that occurs on the curves. Now it’s important to note that if one mistakenly assesses the baseline by including the aliasing you may end up with a pixel of difference between the two sides, (someone who knows nothing about fonts may include a descender or a loop, but this would be an extreme error), however even a one or two pixel difference from a poor measurement would NOT account for the amount of distortion that would occur if this text was really siting on a curved page.

Also, Sometime after I uploaded this video the IDF uploaded a new version of the file. I don’t know what time this happened, but when I checked on August 8th the cover image was darker and no longer matches the hash of the original image. I’m not sure why this alteration was made, but since I cannot predict what alterations they will make in the future I am linking to the original here on a backup server. You can reference the modified version they uploaded here (uploading this for reference in case they change it back).

Now if a conspiracy theorist uploaded two tiny low res images like this and called them evidence, they would be mocked, but this is Israel, so we’ll have to do a proper debunking.

First I want you to look at this image of the supposed cover and take note of something important. This is supposed to be a scan of a real piece of paper, and this paper has been folded, has staples in it, and is slightly bent on the right hand side. Also note that the fold in on the right hand side is significant enough to cause a coloration change which indicates a difference in height.

What does this all mean?

The paper in this image was NOT flat when it was scanned. That’s important, you’ll see why in a moment.

Now if you had real text that was printed onto a piece of paper and you introduce a slight curve to that paper, then the text will have a slight curve as well. But in this image, the text not doesn’t curve. It’s 100% straight even as it passes over the fold. In fact the lines are straight on all of the text here, all the way down to the single pixel level. To demonstrate this I have overlaid a set of vector based lines that are perfectly straight, intersected by a perpendicular line at a perfect 90 degree angle. Here we can zoom in and see that they line up precisely down to the pixel, all the way across the page, from left to right.

NOTE: It’s much more clear if you download this image yourself and zoom in completely. There you will see that it is no exaggeration when we say that the text lines up to the pixel even across the curve