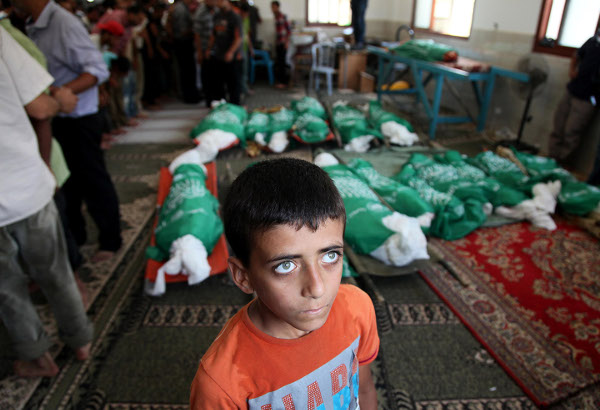 I’d like to propose a new rule of thumb for writers: When your op-ed’s first sentence reads “Let’s state the obvious: No one likes to see dead children,” you should step away from the keyboard, take a look in the closest mirror and think long and hard about exactly the argument you’re about to make. Otherwise, you may end up with an execrable screed like the one Thane Rosenbaum published in the Wall Street Journal on Monday. Rosenbaum argues that the adult residents of Gaza are not innocent civilians, as even Israeli leaders (sometimes begrudgingly) admit, but part of a “citizen army.” He writes:

To qualify as a civilian one has to do more than simply look the part. How you came to find yourself in such a vulnerable state matters. After all, when everyone is wearing casual street clothing, civilian status is shared widely.

The people of Gaza overwhelmingly elected Hamas, a terrorist outfit dedicated to the destruction of Israel, as their designated representatives. Almost instantly Hamas began stockpiling weapons and using them against a more powerful foe with a solid track record of retaliation.

What did Gazans think was going to happen? Surely they must have understood on election night that their lives would now be suspended in a state of utter chaos. Life expectancy would be miserably low; children would be without a future. Staying alive would be a challenge, if staying alive even mattered anymore.

To make matters worse, Gazans sheltered terrorists and their weapons in their homes, right beside ottoman sofas and dirty diapers. When Israel warned them of impending attacks, the inhabitants defiantly refused to leave.

On some basic level, you forfeit your right to be called civilians when you freely elect members of a terrorist organization as statesmen, invite them to dinner with blood on their hands and allow them to set up shop in your living room as their base of operations. At that point you begin to look a lot more like conscripted soldiers than innocent civilians. And you have wittingly made yourself targets.

There are a number of problems here. First, here’s The Post’s graphic of the deaths caused by the Gaza crisis through Monday: Even if Rosenbaum’s logic about the adult population in Gaza was correct, that would still mean that well over 100 innocent children have been killed since the conflict began. (Also, why, in Rosenbaum’s telling, are the diapers in Gazans’ homes necessarily dirty? Would these people be civilians if the diapers were clean?) Second, the claim that voting for a government takes away someone’s status as a noncombatant would be ludicrous if applied to all populations in all conflicts equally. Such an attitude would at the very least contradict Article 33 of the Fourth Geneva Convention: “No protected person may be punished for an offense he or she has not personally committed.” It also probably would upend much of the traditional framework protecting anyone not carrying weapons in war zones across the globe.

Third, as Matt Bruenig points out, Rosenbaum’s words chillingly echo the arguments of someone else who took a narrow view of innocent civilians: Osama bin Laden. Here’s bin Laden in 1998:

This is my message to the American people: to look for a serious government that looks out for their interests and does not attack others, their lands, or their honor. And my word to American journalists is not to ask why we did that but ask what their government has done that forced us to defend ourselves.

Whatever your stance on the Gaza conflict, Rosenbaum’s argument was repugnant when bin Laden used it and it remains repugnant today.