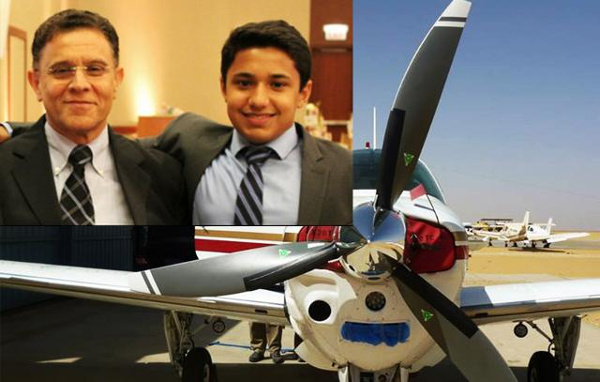 Indiana teenager Haris Suleman died on Wednesday when his plane crashed into the Pacific Ocean.

The 17-year-old was attempting to fly around the world in 30 days and set a record as the youngest pilot to do so in the shortest amount of time.

The plane went down shortly after leaving Pago Pago in American Samoa Tuesday night. Suleman and his father, Babar Suleman, were on board.

Suleman’s last tweet: “Pago Pago is without a doubt top 5 places I’ve been this summer :)”

Writing on Facebook, where the duo had documented the journey in a group called Fly Around the World in 30 Days, a family member listed as a group admin on a Facebook group dedicated to tracking the flight confirmed that the boy’s body had been found but the father’s body remained missing.

“Haris has been found — he did not make it,” Hiba Suleman writes. “My father has not yet been found. Please pray that my dad is found alive and well. Also, hug your siblings and parents — tell them you love them, a hundred time. A thousand times. It will never feel like it’s been said quite often enough.”

A spokesperson for the group, Eddie Gold, said the cause of the crash remains unknown in a post pinned to the top of its page.

“There is no indication as to why the crash happened except that the crash site was about 1 mile from the end of the runway and out to sea,” Gold writes.

“It was obviously very dark and the airport was uncontrolled. It is very unlikely they had reached an altitude that enabled them to contact the ATC [Air Traffic Control] on Samoa. The area is in the New Zealand SAR [Search and Rescue] region and it was New Zealand SAR that received a distress signal from the aircraft. The timing of the signal (possibly a satellite ping) put it very close to the crash site when transmitted.”

The NTSB tweeted that it was investigating the crash.

The Sulemans left the state on June 19 in hopes of making the trip in 30 days to set the record for the fastest circumnavigation around the world in a single-engine airplane with the youngest pilot in command to do so. The trip was also raising money for the Citizens Foundation, a nonprofit that builds schools in Pakistan, according to the father and son’s website.

Father-and-son team of Babar and Haris Suleman will fly around the world in 30 days in a single-engine plane to raise money to build schools in rural Pakistan! Together, they will travel nearly 26,000 miles, though 25 cities, during the course of several hundred hours!

They planned to return home Sunday.