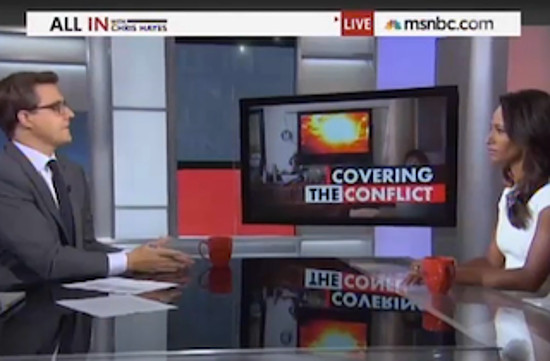 MSNBC contributor Rula Jebreal broke the unspoken rule of mainstream media punditry this week, and denounced the bias towards Israel that is endemic in western media.  She appears to have been blacklisted for her efforts.

Speaking on Ronan Farrow’s show, she accused MSNBC of covering the Israeli perspective far more than the Palestinian side.

“We are disgustingly biased when it comes to this issue,” said Jebreal, an Italian-Palestinian journalist with dual Italian and Israeli citizenship. “Look how [much] air time Netanyahu and his folks have on air on a daily basis Andrea Mitchell and others. I never see one Palestinian being interviewed on these same issues ”

“I’m going to push back a little on that,” Farrow interjected. “We’ve had Palestinian voices on our air.”

“Maybe for 30 seconds, and then you have twenty-five minutes for Bibi Netanyahu, and half an hour for Naftali Bennett,” Jebreal countered, referring to Israel’s prime minister and minister of the economy, respectively.

Jebreal has a point, and is not the only voice piping up on this issue.

Much of the coverage in the West places the onus for peace on the Palestinian side.  This is done with questions like: What is being done within Palestine to stop Hamas firing rockets into Israel? While failing to mention the 8 years Gaza has been under siege by Israel.

As Mohammed Elmasry writes for Middle East Eye, if they really wanted to change the narrative, they could ask questions like:

“why – according to the world’s leading academic experts – Israel consistently blocks legitimate peace initiatives, leads the world in United Nations resolutions violations, and has broken all of the recent ceasefire agreements with Hamas, including in the most recent episode of violence. Or inquire about how Israel has created apartheid-like conditions as part of its 47-year illegal occupation of Palestinian territories, and, in so doing, has pursued a policy of collective punishment on defenseless Palestinians”

But those questions remain unasked.  Because of this, the impression left with unwitting viewers is one of an intractable situation in which Israel has few choices, all of them unpalatable – as if in some kind of battle for survival against a determined and equal foe. This is quite different from the reality of one of the world’s most powerful militaries maintaining an illegal and brutal occupation over millions of civilians.

So, what happened when Jebreal called out this failure? She started getting cancellations.

Days earlier, CNN reporter Diane Magnay was pulled from the country for tweeting her disgust at threats of violence she received by Israelis watching the assault on Gaza from a hill and cheering as the bombs dropped.  Her tweet and the coverage is below.

Magnay has been reassigned to Moscow.

Meanwhile, Israel is bombarding – from land, air and sea – a densely populated urban area in which 1.8m are trapped behind Israeli-built security walls.  Palestinian deaths have soared to nearly 600 in a week, and with over 3,000 injured.  Israel has obliterated hospitals, homes, a treatment center for disabled people, even ambulances making their way to the injured and dying- and snipers have been killing Palestinian civilians as they search the rubble for their relatives.

This morning, Israel killed 28 members of the same family in air strikes.

But you’ll be hard pressed to find a mainstream US commentator decrying this massacre.

It looks like you can say a whole lot on US mainstream media – you can endorse the rape of women in the military, you can throw racist insults at the President, you can even rant against gay and lesbian citizens and compare them to child rapists – but what you cannot do, as a mainstream media pundit, is point to Israeli bias in news reporting and expect the chance to do it again.