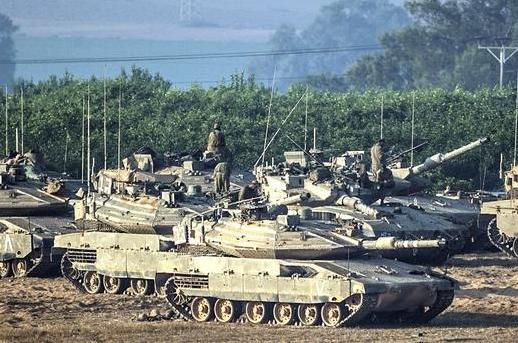 Israel’s ground operation in the Gaza Strip continues, as Israeli troops backed by tanks, aircraft and navy ships strike an array of targets including tunnels used by Hamas fighters.

Israel’s military says it has hit some 200 terrorist targets since the operation began late Thursday, including more than 20 tunnels used to infiltrate Israel and smuggle weapons and explosives.

The military says more than 20 militants have been killed in the offensive.

U.S. President Barack Obama say he has told Israeli Prime Minister Benjamin Netanyahu that “no nation should accept rockets being fired into its borders,” as Israeli troops backed by tanks, aircraft and navy ships continued to advance into the Gaza Strip.

Speaking at the White House Friday, the president told reporters he made clear during a phone conversation with Netanyahu that the understanding is that the ground operation will destroy tunnels that Hamas militants are using to attack Israel.

“We are hopeful that Israel will continue to approach this process in a way that minimizes civilian casualties and that all of us are working hard to return to the cease-fire that was reach in November of 2012,” he said.

The ground incursion has escalated a conflict that began last week when Israel began air strikes in Gaza targeting Hamas positions.  Palestinian militants have continued to launch a barrage of rockets into southern Israel.

“In the last 11 days we’ve struck about 2,100 targets and there have been over 1,500 rockets launched from Gaza. So this is the playing ground, this is [what] we are in the midst of, and this is the challenge we are facing today,” said Israeli military spokesman Peter Lerner.

Palestinian officials say more than 25 Gaza residents been killed since the start of the ground offensive.  More than 270 Palestinians have died since July 8, when Israel expanded its airstrikes in Gaza in an attempt to stop rocket fire into Israel.

Two Israelis have died, including a soldier in the ground operation and a civilian in a rocket attack.

Netanyahu told his Cabinet Friday that the military has been instructed to prepare for a possible widening of the ground operations.

Israel has mobilized an additional 18,000 reservists adding to nearly 40,000 already called up.

Thousands of Palestinians have sought shelter at United Nations schools in Gaza to escape the fighting. Many left their homes after being alerted by Israeli leaflets and phone calls of the impending operations.

Taher Assar lives in the Nuseirat camp in central Gaza with his wife and five children. He says they spent a fearful night without power as the sounds of F-16s, tanks and rockets roared all around them.

Diplomatic efforts to forge a comprehensive cease-fire deal between the warring parties are ongoing.  Palestinian President Mahmoud Abbas has traveled to Turkey to try to get Istanbul to exert its perceived influence over Hamas.

An Egyptian-brokered deal agreed to by Israel earlier this week fell through after Hamas said its representatives were left out of the consultations. Hamas has called for the lifting of an Israeli blockade on Gaza and the release of Palestinian prisoners as part of any long-term truce.