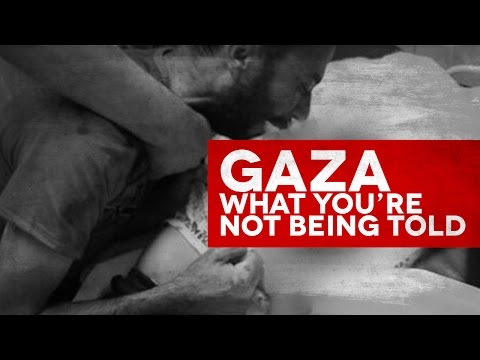 The corporate media isn’t just distorting the facts on the Gaza assault, they’re flat out covering them up.

On July 7, 2014 Israel began a massive assault on the Gaza strip of Palestine. In the first week alone Israel dropped over 400 tons of bombs, killing over 130 Palestinians. Most were civilians, about half of them were women and children. By the time you are watching the the number will be higher.

Israel’s official justification for this wholesale slaughter: the murder of three Israeli teenagers which Israel blames on Hamas. That’s not the real reason. First of all Israel has not produced one single piece of evidence implicating Hamas or even a Palestinian in the murders, and in fact the the evidence we do have indicates that that murderers were Israeli. You see on Tuesday July 1st, The Jerusalem Post released the audio of the kidnapped teen’s distress call to police, and in that call the kidnappers can be heard telling the boys to put their heads down in HEBREW. According to the Jerusalem Post prior to being leaked to the public this audio was being held under a gag order by the Israeli government…