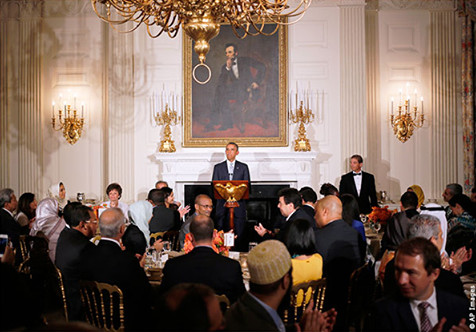 At the annual White House Iftar dinner commemorating the Muslim holiday of Ramadan, President Barack Obama endorsed Israel’s ongoing assault on the Gaza Strip and defended government spying on Muslim-Americans. Alongside dozens of Muslim-American community activists and Muslim diplomats, the White House welcomed Israeli Ambassador to the US Ron Dermer, an outspoken advocate of Israel’s settlement enterprise who has claimed Muslim and Arab culture is endemically violent.

In the past, the annual Iftar dinner passed without much notice. Last year, President Barack Obama delivered a boilerplate speech to the assembled crowd of Muslim-American community activists and Middle Eastern ambassadors about his efforts to spur entrepreneurship. But this time, amidst a one-sided Israeli assault on the Gaza Strip that was about to claim its 200th death in just a week, and which the US had backed to the hilt, the heat was on.

While Obama prepared his remarks, calls rang out with unprecedented intensity for invitees to boycott the July 14 ceremony. Among those who urged a boycott in protest of the Gaza assault and ongoing government spying on Muslim-Americans was the Arab-American Anti-Discrimination Committee (ADC), an established presence in Washington representing the country’s largest Arab-American advocacy group.

Joining the boycott call was Mariam Abu-Ali, the sister of Ahmed Abu Ali, a US citizen renditioned to Saudi Arabia for torture before being sentenced to life in prison on dubious charges of threatening to kill George W. Bush. “The White House Iftar is a slap in the face to those in the Muslim community who have been victims of U.S. civil-rights and human-rights abuses,” Abu Ali wrote. “It is an attempt by administration after administration to whitewash the crimes of the U.S. government against Muslims by painting a less-than-accurate picture of their relationship with the American Muslim community.”

As established Muslim-American leaders like Laila Al-Marayati lined up to boycott (Al-Marayati rejected an invitation to the State Department’s Iftar), others defended their presence at the ceremony. Most vocal among them was Rep. Keith Ellison (D-MN), one of the two Muslim members of Congress. “I disagree with the tactic,” Ellison remarked in a statement released by his office. “It will not close Guantanamo Bay, guarantee a cease-fire between Israel and Palestine or undo the NSA’s targeting of Muslims.”

The Muslim Public Affairs Council (MPAC) echoed Ellison, insisting that the event would “allow [them] to engage with senior White House officials for a decent amount of time on substantive issues.”

While Muslim-American civil rights groups like the Council on American Islamic Relations have assumed a more confrontational posture towards the White House and boycotted a prayer breakfast with former New York City Mayor Michael Bloomberg in protest of his support for NYPD surveillance of Muslims, MPAC has taken an altogether different tack. Its role as a paid consultant on the cable TV series, “Tyrant,” was perhaps the best example of its accommodationist stance.

Produced by Howard Gordon, the creator of “24” and “Homeland,” the show starred a white actor playing a pathological Arab dictator who ruled over the deeply dysfunctional fictional nation of Abuddin. Even mainstream TV critics derided the series as unbearably Orientalist, with the Washington Post’s Hank Stuever describing it as a “stultifyingly acted TV drama stocked with tired and terribly broad notions of Muslim culture in a make-believe nation on the brink.” Leading up to the White House Iftar, a leader of a major Muslim advocacy organization told me on background that MPAC was bleeding support, especially from younger activists.

At the Iftar dinner, Obama launched into a defense of Israel’s assault on the Gaza Strip, declaring,“I will say very clearly, no country can accept rockets fired indiscriminately at citizens. And so, we’ve been very clear that Israel has the right to defend itself against what I consider to be inexcusable attacks from Hamas.”

He went on to claim against all evidence that his administration had “worked long and hard to alleviate” the humanitarian crisis in Gaza, and that it had “emphasized the need to protect civilians, regardless of who they are or where they live.”

Ali Kurnaz, the central regional director for the Florida-based Emerge USA, was in the audience. He told me that Obama’s remarks provoked deep discomfort, with attendees exchanging disturbed looks and rolling their eyes in astonishment. No one walked out in protest, however.

“After the dinner, I overheard at least three different exchanges attendees pointing out that Palestinians should have a right to defend themselves too,” Kurnaz recalled.

Like many others who joined the dinner, Kurnaz was not aware that Israeli Ambassador Ron Dermer had been invited. Dermer was a longtime confidant of Israeli Prime Minister Benjamin Netanyahu and the son of the Republican former Mayor of Miami Beach. This year, Dermer broke diplomatic protocol by appearing at a fundraiser for the Republican Jewish Committee, helping to raise money for a partisan organization dedicated to undermining Obama’s agenda.

Perhaps the most startling aspect of Dermer’s presence at the Iftar dinner was his stated belief that “a cultural tendency towards belligerency” is “deeply embedded in the culture of the Arab world and its foremost religion.”

According to Kurnaz, Dermer spent the evening isolated in the White House’s Green Room adjacent to the main reception area, where he milled around mostly without company. None of the activists invited to the dinner approached him.

When dinner began, Kurnaz said Obama was unusually candid with those seated at his table. They confronted him on the issue of domestic spying, an issue that took on renewed immediacy after revelations by the Intercept that the NSA and FBI has spied on leading Muslim-American civil rights activists. Obama attempted to remind them that the spying had begun under his predecessor, Bush, but defended the practice nonetheless, denying that the NSA had violated any laws.

Next, those seated at Obama’s table challenged him on Syria and Iraq, with some suggesting the US could have done more to prevent sectarian violence. Obama remarked that the mass killings and rise of groups like ISIL would have taken place regardless of whether the United States asserted itself in the Middle East.

It was only on the issue of Palestine that the president punted, responding with boilerplate about how the issue unites Muslims.

Kurnaz said Obama’s remarks did not surprise him, nor did he have any sense that he could influence the president by venting his grievances. His colleague, Laila Abdelaziz, had boycotted, but for him, the event presented opportunities he did not want to forfeit.

“It was a great networking opportunity because I got to meet people from Muslim non-profits across the country that I didn’t even know existed before,” Kurnaz said. “We’re planning to expand in the coming year or two and now I know people in California and Michigan who can help.”

But the event demoralized those who insisted that their presence might sway the president on his foreign policy. With his remarks, Obama validated critics of the ceremony while embarrassing attendees who argued against the boycott calls.

In an apparent bid to save face, MPAC released a statement condemning Obama’s comments at the dinner, claiming its members were “appalled” by his endorsement of Israel’s assault on Gaza.

Only one person who attended the dinner seemed fully satisfied. Dermer tweeted afterward, “Appreciate strong statement there by President Obama about Israel’s right to defend itself.”