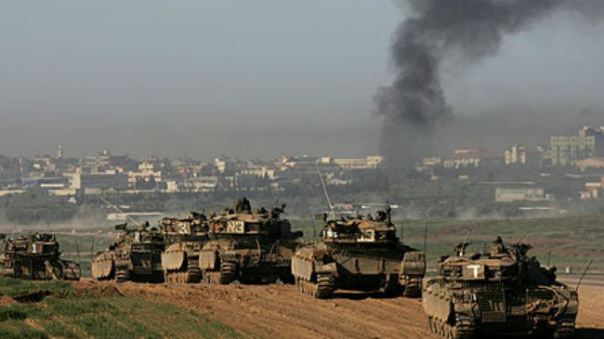 Israeli tanks entered Gaza on Thursday night after Prime Minister Benjamin Netanyahu ordered a ground invasion, a major escalation in a ten-day offensive that has already killed more than 230 Palestinians.

Witnesses in Gaza reported heavy bombing from jets, warships and artillery stationed along the border, with much of the firing was directed at northern Gaza. Electricity was cut off across a large swathe of the strip, though it was unclear why.

A statement from Netanyahu and Defence Minister Moshe Ya’alon described the invasion as focused on destroying tunnels connecting Gaza to Israel.

Speaking to Al Jazeera, Hamas spokesperson Fawzi Barhoum said that the ground operation amounted to “stupidity” and that the Israeli army would “pay a high price”.

Sami Abu Zuhri, another spokesman for the group which controls Gaza, said: “It does not scare the Hamas leaders or the Palestinian people. We warn Netanyahu of the dreadful consequences of such a foolish act.”

Speaking to Al Jazeera, Diana Buttu, a former legal advisor for the Palestinian peace negotiating team, said: “I think it’s high time that the Palestinian Authority go and sign on to the International Criminal Court and start charging Israel with war crimes. This isn’t the first time this has happened.”

On Thursday morning, a group of gunmen had tried to enter southern Israel through a tunnel from Gaza, the army said eight of the 13 attackers were killed, and Hamas claimed responsibility for the operation.

It was the second such incident in the past ten days.

“[The operation] will deal significant damage to the infrastructure of Hamas and other terrorist organisations in the Gaza Strip,” the army said.

The escalation came not long after a five-hour “humanitarian ceasefire” requested by the United Nations, which gave residents a brief chance to venture outside before the bombardment resumed.

Both sides largely stopped firing, and people ventured out to markets, grocers, barbers and banks, which opened for the first time in more than a week.

At least 231 Palestinians have been killed so far, including 39 children, and more than 1,700 injured. One Israeli has been killed by rocket fire from Gaza.

Media reports on Thursday afternoon, attributed to Israeli officials, suggested that a ceasefire had been agreed and would take effect the next morning.

But diplomatic sources said that the parties were still meeting, and both sides have now denied the reports.

‘No progress in talks’

Later in the afternoon Sami Abu Zuhri, a spokesman for Hamas, told reporters there was no significant progress in the talks.

He also denied that any Hamas leaders had travelled to Cairo: Moussa Abu Marzouq, a senior member of the group, has been meeting with Egyptian mediators, but he has been a longtime resident of Cairo.

Azzam al-Ahmad, a Fatah representative in Cairo, also told Al Jazeera that there was no agreement.

Avigdor Lieberman, the Israeli foreign minister, hinted at a long military campaign, telling a group of ambassadors to step up their diplomatic efforts.

“The report on a ceasefire, allegedly for tomorrow morning, is far from reflecting reality,” he said. “I spoke now with the prime minister, and at least right now, this is unknown to us.”

Hamas last week outlined some basic terms for ending the conflict, demanding an end of the siege on Gaza and the release of dozens of prisoners freed in a 2011 deal but re-arrested this summer.

Those concessions would be politically difficult and unpopular in Israel, and in Egypt, which would have to open the Rafah crossing with Gaza.

The year-old military-backed government in Cairo has taken a hard line towards Hamas, declaring it a terrorist organisation and destroying the smuggling tunnels on which it relied for revenue.

With no diplomatic progress, Israel resumed airstrikes shortly after the UN’s ceasefire ended.

Three children from the same family were killed in a bombing in Gaza City, one day after a strike on a beach killed four other young children, cousins from a fishing family who were playing by the port.

Palestinian groups fired more than 100 rockets into Israel, including two barrages at the Tel Aviv metropolitan area. No serious injuries or damage were reported.

The army also said it shot down a drone launched from Gaza, for the second time the week.