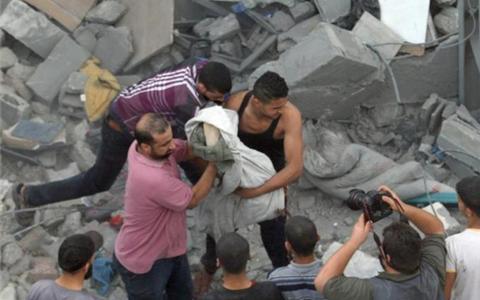 A total of 121 Palestinians have died in Israel’s five-day bombardment of Gaza as Hamas continued to launch rockets into central Israel and the US offered to help broker a truce.

A dozen Palestinians were killed by Israeli attacks overnight on Saturday in the occupied Gaza Strip, emergency services said. A total of 920 people have been injured since Israel began its campaign on Tuesday.

Gaza medical sources told Al Jazeera that three handicapped children and a nurse were killed in the bombing of the NGO, Mercy Givers for Handicaps, in Jebaliya.

The AFP news agency also reported two dead at a charitable association for the disabled in Beit Lahiya, three deaths in the eastern Tufah area of Gaza City, and three others killed in western Gaza City.

The US said it remained “prepared to facilitate a cessation of hostilities”, but the Israeli prime minister Benjamin Netanyahu said he would not end his campaign until Hamas rocket fire stopped.

“No international pressure will prevent us from striking, with all force, against the terrorist organisation which calls for our destruction,” he told a news conference in Tel Aviv.

“I will end it when our goals are realised. And the overriding goal is to restore peace and quiet. No international pressure will prevent us from acting with all power.”

Netanyahu added that he was in touch with numerous world leaders, including the US president, Barack Obama, and the leaders of the UK, France, Germany and Canada.

However, the UN’s top human rights official on Friday said the air campaign may violate international laws prohibiting the targeting of civilians.

“We have received deeply disturbing reports that many of the civilian casualties, including of children, occurred as a result of strikes on homes,” said Navi Pillay, the UN high commissioner for human rights.

Israel said on Saturday that 680 rockets had been fired from Gaza into Israel since Tuesday, injuring nine Israelis.

A woman slightly injured late on Friday in the southern city of Beersheva was the latest injury reported.