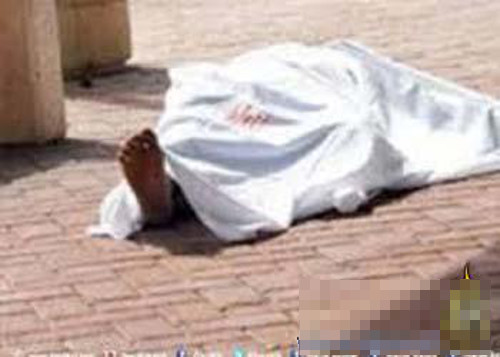 Purported image of slain imam could not be verified.

“Here a Sunni movement is executing Sunni religious leaders. That should make us think,” said Heiner Bielefeldt, the UN’s special rapporteur on freedom of religion or belief. “It’s important to focus more attention on these particular killings, because here we are not talking about Sunnis versus [Shiites]. This is a very clear case of atrocities committed against their own people, against religious leaders from Sunni Islam who probably have a less simplistic understanding of what Islam means.”

The Islamic State’s leader, Abu Bakr al-Baghdadi, led prayers last Friday at Mosul’s Great Nur al-Din Mosque. One of the first clerics executed in Mosul, according to the UN, was that mosque’s imam, Muhammad al-Mansuri.

He was executed on June 12, the UN said, for failing to pledge allegiance to the Islamic State, which released a 21-minute video on Saturday of Baghdadi preaching from the same minbar, or pulpit, that Mansuri once occupied.

Twelve other Sunni clerics were executed on June 14, the UN says.

Baghdadi has asserted that all Muslims owe allegiance to the Islamic caliphate – which the Islamic State declared on June 29 and now exists in the areas it controls in Syria and Iraq – and to  Baghdadi, who now calls himself Caliph Ibrahim.

A resident of Mosul who once worked at the mosque said on Saturday that the Islamic State is now dictating the content of Friday sermons in the city.

The killings emerged as Iraq’s parliament on Monday stalled for a second time, cancelling its planned Tuesday session to give the country’s deeply divided political factions time to reach an agreement on an urgently needed new government.

Amid the chaos, Iraq’s Kurdish minority has threatened to hold a referendum on independence for its own largely autonomous region in the north.

Putting off the work of reaching consensus is a slap in the face to efforts by Iraq’s Shiite clergy, the United States, the UN and Iran, who have all urged the swift formation of an inclusive government to hold the country together.

The first session of the new parliament, on July 1, ended in a walkout by Sunni and Kurdish MPs. Politicians and analysts said the cancellation of the second session was a sign that the process could drag on for months, despite the looming threat of the nation’s total collapse.

“The delay exemplifies what ordinary Iraqis think of their government: weak, dysfunctional, self-serving and, above all, irrelevant,” said Zaineb al-Assam, a senior analyst at IHS Country Risk.