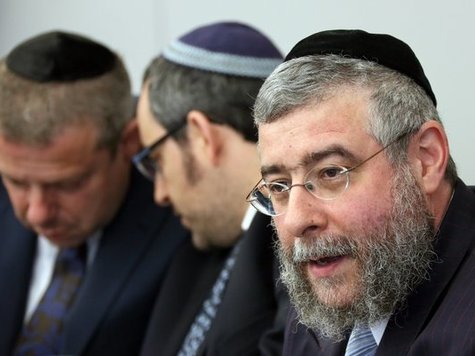 President of the Conference of European Rabbis, Pinchas Goldschmidt

Europe’s most senior rabbi has issued an impassioned defence of the right of Muslim women to wear a burka in public.

Pinchas Goldschmidt, the president of the Conference of European Rabbis, said that a European Court of Human Rights ruling upholding France’s ban on veils “crossed a red line” for religious freedom.

In an article for Telegraph.co.uk he said that he was “deeply suspicious” of claims that the prohibition on wearing a burka or a niqab in public was designed to promote relations between communities.

The orthodox rabbi warned that religious communities across Europe were feeling increasingly “disaffected and marginalised”, suggesting that the ban should be of concern to people of all faiths.

The European court accepted the French government’s argument that the veil ban was justified in the interests of social cohesion. French authorities say the veils are degrading to women and an affront to France’s secular traditions.

However, Rabbi Goldschmidt, who was born in Switzerland and is chief rabbi of Moscow, suggested the ruling threatened religious freedom.

He said it represented an “unravelling” of the philosophy among western democracies that the state should intervene in religious practice only if it has an “unreasonable impact” on another person.

“The bans on the building of minarets in Switzerland in 2009 and on wearing a burka, upheld by the ECHR in the last few days, have crossed a red line,” he said.

“My personal view is that to suggest that the particular appearance of a place of worship – of which there were only four across the entire country at the time of the Swiss referendum – could somehow negatively impact on a person in any meaningful way is ludicrous in the extreme.”

He continued: “I am also deeply suspicious of claims that a ban on the burka is designed to promote intercommunal relations.”

Politicians have insisted that banning the wearing of burkas and niqabs in public would help to tackle extremism.

But Rabbi Goldschmidt said: “Those people that think banning the burka somehow strikes a blow against extremism are woefully naïve.

“If anything they have created a distraction from the attempts to tackle terrorism and radicalisation and they have made the problem worse.”

France was the first European country to pass a law banning veils that conceal the face in public. Belgium later followed.

The plaintiff in the ECHR case, who was not named, was represented by British lawyers in Strasbourg. She described herself as a 24–year–old female graduate who is a “devout Muslim” .

She insisted that neither her husband nor any other member of her family put pressure on her to wear veils.

The French law, which carries a fine of €150 (£120) or lessons in French citizenship, was brought in under Nicolas Sarkozy, the conservative former president, and is backed by the current Socialist administration of François Hollande.