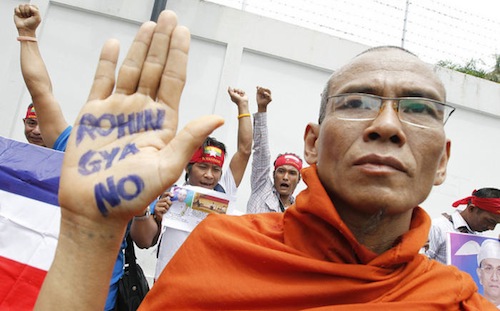 Two years ago, I stood in searing heat along a dusty rural road in Burma, lined for miles with local people waiting with hope and jubilation for history to be made: Aung San Suu Kyi—daughter of an assassinated Burmese independence hero, winner of the 1991 Nobel Peace Prize, and leader of the democratic opposition—would ride by on her way to cast a vote. In the first legitimate elections since a military junta took power in 1962, she won a seat in parliament.

By March of this year, in an indication of how sharply divided people have become here in western Burma, where Buddhist Southeast Asia blends into Muslim South Asia, opinion of Suu Kyi had shifted dramatically. Near the town of Thandwe, in the state of Rakhine, a young waiter showed me on his phone a doctored photo of Suu Kyi, a worldwide icon of popular struggle and democracy. She was in the arms of a caricatured, stereotypical “Muslim.”

“Everyone used to love Aung San Suu Kyi,” the waiter, Naing Htoo, said. “Now everyone hates her. She married a Muslim,” he added, erroneously.

The abrupt turn has occurred since the spread of a virulent ethnic nationalism, a dangerous sequence of events that has led to the displacement of an estimated 200,000 of Burma’s Muslim minority—called Rohingya—many of whom now live in ragged camps near the border with neighboring Bangladesh. At least 192 and perhaps as many as 1,000 were killed in 2012, and 1,345 more have since died trying to flee the country, according to the U.N. High Commission for Refugees, and earlier this month it announced that the exodus of Rohingya fleeing violence and persecution continues, with 15,000 having left in the first four months of 2014. Rohingya refugees have been sold into sex slavery,Reuters reported last year; others are reportedly being used as drug mules. In April, U.N. special rapporteur on human rights Tomas Ojea Quintana stated that the “long history of discrimination and persecution against” the Rohingya Muslim community “could amount to crimes against humanity.”

Burma today is supposedly undergoing a transition to democracy. Though President Thein Sein’s shift consisted largely of just a veneer of political liberalization, it’s been followed by a wave of investment from U.S. and European companies, effectively funding and supporting Thein Sein’s government while it has sat idly and even abetted a nightmare of religious and racial persecution for at least one of the country’s many minority groups.

President Obama on May 15 announced the continuation of economic sanctions against Burma. The West had been busy dismantling punitive measures against the junta, but while Obama credited Thein Sein with taking the country “down a path of both political and economic reform,” he also noted, “The political opening remains nascent, and concerns persist regarding ongoing conflict and human rights abuses in ethnic minority areas, particularly in Rakhine State, and the continued role of the military in the country’s political and economic activities.”

The trouble in Rakhine started a little more than a month after I watched Suu Kyi being greeted by adulation. A 27-year-old Buddhist named Thida Htwe was allegedly raped and murdered in Rakhine. The rape was purportedly committed by a group of young Rohingya. Burma is majority Buddhist; Rakhine State borders Bangladesh, a Muslim nation. The accusation that Muslims had defiled and killed a Buddhist woman brought to the fore a centuries-old resentment of Burma’s Muslim community, unearthing accusations that the Rohingya were illegitimate Burmese and responsible for a host of the country’s problems. Mobs largely composed of Rakhine’s Buddhists burned, looted, and attacked communities of Muslim Rohingya.

“We used to go to their village and us to theirs,” says Rohingya Jamal Hussein, 55, a farmer. “After the 2012 riots we felt that if we left the house, we would be killed; when we went to the market we used to get called ‘kalar.’ ” The term is the Burmese version of the n-word.

As the 2012 violence spread, thousands of Rohingya fled by sea, washing up on beaches in Thailand and beyond. Around 80,000 are thought to have fled in 2012. The violence has continued sporadically ever since.

Zahida, 25, says she came to Bangladesh a year and a half ago, after Buddhist mobs killed her husband, father, and brother.

Rakhine Buddhists “burned our village,” she told me in the town of Cox’s Bazar, Bangladesh, near the Burma border. “People came and tried to confiscate our property, like our cows. When we refused, they came in a mob and tried to grab the Rohingya women; some were raped.”

She says her husband fought back and killed one of the attackers. A few nights later, she told me, “military and [others] came to my house and called to my husband. My husband woke up and went out of the house, and they told him, ‘You have to come with us for a walk,’ so he went with them. After a few days I heard my husband was killed by them.”

Though unverifiable, Zahida’s account is consistent with a Human Rights Watch reportdescribing mob attacks and a government vehicle dumping 18 “naked and half-clothed” bodies at the entrance of a displaced persons camp, “sending a message consistent with a policy of ethnic cleansing.”

Zahida’s grief is still raw, a year and a half later, as she describes how three of her male relatives were killed in separate incidents. The death of her brother seems particularly affecting.

“He was a religious teacher,” she says. “The government came to his house and said, ‘You went to spread your religion.’ It was the military border guards.” Zahida cradles her five-year-old son as she wells up with grief.

A few days later, she continues, “another religious teacher was called by the border guards and asked if he wanted [her brother’s] body. They said, ‘We have killed him. If you want his body, you can have it.’ ”

When the corpse arrived, Zahida says, she saw that her brother’s arms, legs, tongue, and penis had been cut off. She says her grandfather was killed in a similar manner.

Farmer Jamal Hussein, 55, tells a similar story. “Just over a year ago Rakhine people came and attacked the Rohingya people,” he told me. The local Rohingya community had recently protested an attack on a religious group en route to a nearby town. “It was a Friday evening. Both my sons were killed by the Rakhines; that’s why I came to Bangladesh,” he continues. On their way to the market one day, witnesses told him, Rakhines stabbed his sons, Karim, 15, and Nurul Islam, 20, to death.

Rohingya camps like the one where Zahida and Jamal live are on both sides of the border. None offers much in the way of aid. The Burmese camps are largely cut off from the rest of the country, creating a dire shortage of basic food and medical supplies, according to NGOs and press reports. NGOs providing assistance were recently hounded out by Rakhine mobs after a rumor circulated of an NGO member desecrating a Buddhist prayer flag. U.N. Assistant Secretary-General for Humanitarian Affairs Kyung-wha Kang called the conditions in the camps “appalling,” with “wholly inadequate access to basic services including health, education, water and sanitation.”

Conditions for the Rohingya today may be even worse than when the U.S. Embassy described the region as a “vast internment camp” six years ago.

“The military has effectively sealed the Rohingyas off from the world and keeps them at the bare subsistence level—it is an internment camp,” the embassy reported in cables released by WikiLeaks. “Infant mortality [was] four times the national average; 64 percent of children under five are chronically malnourished and stunted growth is common. Teachers are scarce, with one for every 79 students vs. the 1:40 national average.”

Despite the high levels of infant mortality, the government has committed to a two-child policy—but only for Rohingya.

Buddhist zealots contend that the Rohingya are a legacy of colonial British rule in the 19th century and not truly Burmese. Yet Michael Charney, member of the academic staff at University of London’s SOAS South Asia Institute, writes that Muslims have been in the Rakhine region since “at least the ninth century.” Early Muslim residents were likely transient, but in the late 16th and early 17th centuries Portuguese slave traders brought Bengali Muslim captives to Rakhine, then an independent kingdom. These formed the first settled, agrarian Muslim communities.

The scapegoating of Muslims came later, when a different South Asian group did arrive with the British; many became successful moneylenders. During the Great Depression, notes Professor Sean Turnell of Macquarie University in Sydney, ownership by this group of agricultural land in the region soared as bankrupt farmers forfeited the collateral they had used to gain financing from the late arrivals from India, known as Chettiar. Thus those of South Asian origin became lumped in together and were “easy scapegoats not just for the current economic distress but the foreign domination of Burma’s economy,” writes Turnell.

Burma’s first leader during the transition to independence after World War II was a young, hard-nosed idealist and the father of the country’s current democracy icon, Aung San Suu Kyi. Aung San “said that Muslims and Buddhists were no different,” recalls Mohamed Idris, 60, sheltering from the sun in his new home in the Bangladeshi fishing village of Shamlapur. “He looked at all people with one eye.”

Political rivals assassinated Aung San in 1947. By the time of the dictatorship of Ne Win in 1962, despite his having been a colleague and a “comrade” of Aung San’s, the government took a radically different approach. Ardent nationalist identity politics and the draconian isolation that the country is only now beginning to emerge from took hold, and soon there were pogroms against different ethnicities. Allegations that the dictator was stoking them were both widespread and credible.

In 1982 Rohingya were excluded from citizenship, making every day survival difficult, as they were denied basics such as freedom of movement and education. Periodically, the military would persecute Rohingya in organized campaigns. The first major instance, in 1978, was called Operation Dragon King; Rohingya were targeted with extreme brutality, and around a quarter of a million fled to Bangladesh. One refugee I met in 2011 described the purge: She claimed military personnel butchered her eight-month-old son before her eyes.

Today’s government in Burma, which started calling itself Myanmar in 1989, traces its ideological lineage to Ne Win. In 2010, it declared itself the winner of an election it had rigged. Suu Kyi was allowed to take part in a 2012 by-election, in which only a small fraction of the seats were contested. Parliament remains stocked with former military personnel.

This spring, the government attempted a long-overdue census. Because it has been 60 years since the last accurate count, little demographic data on the country exists. Many Rohingya hoped that the chance to be counted would help assure their place in their home.

Days before the census was to be conducted, though, the government announced that the word “Rohingya” would not be allowed on the census forms, and that those identifying as such would only be allowed to call themselves “Bengali”—the term for residents of the region of Bengal, comprising Bangladesh and the Indian state of West Bengal. The U.N. agency helping with the count said this contradicted its agreement with the government, and it told The Guardian that government census takers declined to count anyone who identified as Rohingya. Idris told me, “The women of the village were united in saying, ‘Even if they kill us, we have to say we are Rohingya. If we say ‘Bengali,’ they will remove us from [Rakhine] forever.” Idris fled the country shortly after the census, like thousands of other Rohingya, for Bangladesh. “In our village there are no younger boys or men,” Idris said. “All men and boys have been arrested, killed, or fled. Some women have left, but most have stayed. At night, [Buddhists] come to our village and attack any ladies they see to rape them.”