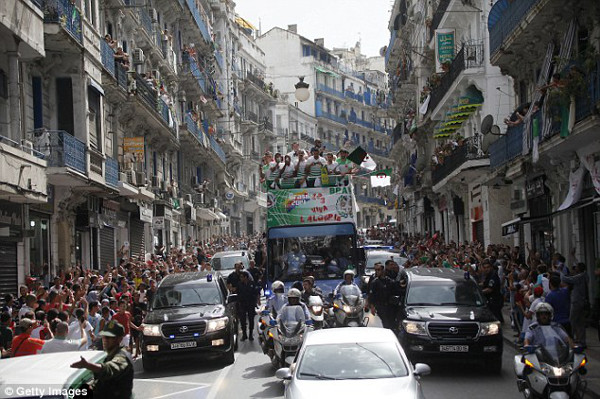 First the Palestinian flag was draped from the team bus during the team’s triumphant open-top bus tour of the capital, now it has been claimed that the Algerian national football team are to donate their entire World Cup prize fund to the embattled people of Gaza.

According to quotes attributed to Algeria’s star striker Islam Slimani, the team will give up all of the estimated $9 million (£5.25 million) they received as valiant losers in the round of 16.

Yet speaking at a reception in Algiers where the team returned to a hero’s welcome yesterday, Slimani apparently said: “They need it more than us.” The announcement was reported by the Jordanian football writer Waleed Abu Nada as well as the Dutch daily newspaperAlgemeen Dagblad.

If true, the team could face accusations of bringing politics to bear in the world of sport. Yesterday, YouTube footage of the team’s open-top homecoming tour through Algiers showed at least one Palestinian flag flying from the bus by the team.

Last month, Fifa announced it was to open disciplinary proceedings against Argentina after the team unfurled a political banner prior to a friendly match against Slovenia with the phrase “Las Malvinas son Argentinas”, which translates as “The Falkland Islands belong to Argentina”.

However, if reports of the donation are true, it will see Algeria gain a whole new set of fans beyond football. They were also the only African side to make it through past the group stages – and their reported willingness to give away the prize money is in stark contrast to the reported behaviour of the Cameroon, Ghana and Nigeriateams.

Algeria has traditionally been a strong ally of the Palestinian cause in the long-running Middle East dispute with Israel.

The crisis has intensified in recent days as Israel’s prime minister Benjamin Netanyahu struggles to control a frenzied reaction to the murder of three Israeli hitch-hikers, which the country blames on Hamas.

Israel has begun sending troop reinforcements to its border with Gaza and begun intensifying air strikes, while more than a dozen Palestinian rockets struck southern Israel early this morning.