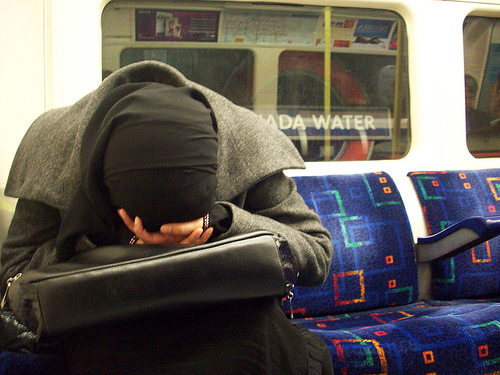 This weekend, the Muslim world greets the holy month of Ramadan, in which those who are healthy enough to do so fast from the onset of dawn until dusk everyday for 29 or 30 days.

As well as a time of spiritual upliftment, enabling Muslims to learn self-discipline and renew their connection with their faith, it is also a very social occasion, in which Muslims are encouraged to mend broken ties, visit relatives and invite guests to share the iftar (fast-breaking) experience.

For the growing number of Muslim converts, however, Ramadan can be a very lonely time, as many of them are not able to share the occasion with their non-Muslim family members and are often forgotten by their local Muslim community.

Tiffany Jenkins, a young American convert, told Aquila Style, “I usually feel quite lonely and left out during Ramadan. Everyone else from Muslim families seems to have it better. [My family] would get annoyed when I would wake up early and start cooking.”

“I don’t know the Muslims here, though I’m not far from a mosque. But they seem to keep to their cultural groups,” she added.

This experience is shared by many converts in Ramadan. One particular convert called Natalia told the Huffington Post that every Ramadanher non-Muslim family offers her food. When she tells them she can’t eat it because she’s fasting, they respond by asking, “Oh, you’re still Muslim?”

Since converting to Islam more than six years ago, Paul K. DeMelto told the Huffington Post that he had done all he could to become a more knowledgeable Muslim, attending a new converts class and hiring Arabic tutors to help him learn to read the Quran, but despite this, he still finds himself alone in Ramadan.

“The one thing that I expected to experience more fully in turning to Islam was engagement in a community,” said DeMelto, a 40-year-old baker, adding that even though he has made major changes in his lifestyle since adopting Islam, he often feels like a Christian alone on Christmas during the holy month.

Caroline Williams, who converted in 2010, agreed with Paul, saying “Part of what drew me in was how welcoming everybody was at the mosque,” however, she added that “people are friendly, but I don’t feel like I’m family.”

“Being invited to private homes isn’t common, and can be the loneliest experience of all when people speak their native language, leaving us to read or stare at the ceiling,” said Nadja Adolf, another convert.

Kelly Kaufman, also jokingly told the newspaper that she would often break her fast alone with “Cocoa Puffs while watching ‘Seinfeld,’” or “chocolate cake and ice cream while playing with my cat.”

“It’s an incredibly lonely experience that I don’t think many people know about,” said Kaufman, who converted in 2010.

A few initiatives have been started to help converts to Islam make the social transition into the Muslim community so they don’t feel isolated. One such initiative was set up by the Delaware Islamic Society after former new Muslims coordinator Vaqar Sharief noticed the plight of many converts.

“I see how the new Muslims are kind of ignored,” he said, adding “many of them stop coming and they leave the religion.”

Ifoundislam.net is also seeking to forge bonds of fraternity between converts and the wider Muslim community this Ramadan with their ‘Online Ramadan Iftar Project’ on Facebook to serve as a place for people who are alone, having no one to share Ramadan or Iftar with.

Members can list themselves by time-zones and coordinate Skype or other methods with members to share iftar together over the web.