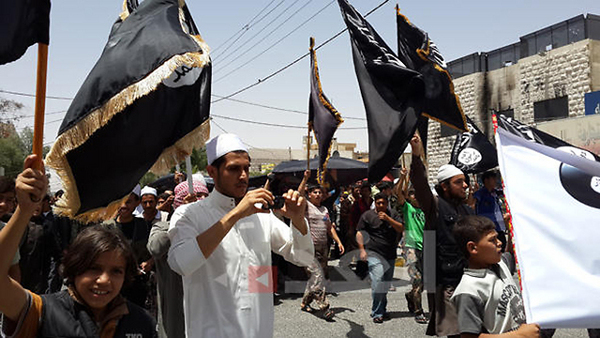 By: Moon Of Alabama

Elijah J. Magnier has an interesting interview with an ISIS commander, Abu Baqr-al-Janabi, in Baghdad. There are plans for ISIS to take the city and there are apparently sleeper cells of fighters waiting for the big attack signal. But, says the commander, ISIS and the attached other forces, will first have to consolidate their positions and eliminate Iraqi government position in their back. The Iraqi government is already giving up some outer position and is consolidating its side by securing only Baghdad, the south and some economically important assets.

The 300 military “advisers” the U.S. had announced to send to Iraqi headquarters will likely never arrive. There is disagreement over their legal status and the Iraqi government, given the U.S. commitment to another regime change in Baghdad, may well conclude that these soldiers would likely be malign actors rather than trustworthy allies. The Maliki government, like the Iranians, probably sees the whole ISIS attack as the result of a U.S. conspiracy.

My hunch for now is that ISIS will not go for the big fight in Baghdad in the near term but will rather try to launch some substantial diversion elsewhere. In the introduction of the interview Magnier writes:

ISIS’s aim is not Iraq and Syria, it is the Levant and beyond. It includes Jordan, Lebanon, Palestine, Israel and more. “No Limits”, as I am told.

There was a pro-ISIS demonstration today in Ma’an, “Jordan’s Fallujah” (video). Just like ISIS had sleeper cells within the Iraqi military it may well have some within the Jordanian forces or secret services. The road between Baghdad and Jordan is in ISIS’s hand as well as the border crossing to Jordan. Could ISIS go, if only as diversion, for Amman before taking on Baghdad?

ISIS: ‘USA decision to hit us will have a positive outcome and will show a US/Al-Maliki alliance against the Sunni”

Islamic State in Iraq and Sham, ISIS or ISIL, refers to the Levant rather than Sham – Damascus or Syria. “Dawla’s supporters, the “State”, mainly use the word ISIS. It has become a commonly used terminology. But ISIS’s aim is not Iraq and Syria, it is the Levant and beyond. It includes Jordan, Lebanon, Palestine, Israel and more. “No Limits”, as I am told.

Abu Baqr-al-Janabi, a “soldier of Dawla”, talks about the recent development in Iraq. He is an Iraqi but not a Baghdadi (from Baghdad itself). Abu Baqr spent most of his childhood in Baghdad and agreed for me to say only that he is in the Iraqi capital now.

This is what he told me:

A: Both are correct. Our initial target is Bilad-al-Sham (Levant). Whichever is correct.

Q: Is ISIS prevailing among other insurgent Iraqi groups? Many reports are saying ISIS represents only a small part of the upraising against Iraqi government. While Iraqi ex vice-President Izzat Duri is leading “Naqshabandi Men” and has the upper hand. Do you confirm?

A: “ A Naqshabandi can be sneaky but they can’t do as they are pleased in Iraq. For example, ISIS has absorbed IAI slowly. Some days back, in Diyala, IAI gave allegiance to ISIS making us as the largest group. As far as it concerns Izzat Duri, he can’t do anything about ISIS expansion. Any wrong move and it will turn ugly. So far, none of these they groups attacked ISIS or backstabbed it. Moreover, It is important to keep in mind that Mosul is the Iraqi Baath party birthplace. Nobody can deny that many groups are involved and fight alongside ISIS but its ISIS that calls the shots. For example its ISIS banners (Banner of monotheism) that is flying high, same thing in Baiji, Tikrit and other towns. But yes, ISIS is not fighting alone as the government claims”.

Q. How come this tolerance? It is well know that the Baathists view of Islam.

A: The Iraqi government tried to suppress Sunni by claiming that it’s a war against ISIS and they portray every religious Sunni as ISIS which is not the case. There is a huge difference between an Iraqi Baath and a Syrian Baath. They actually had beef with each other. Syrian Baath is ultra secular, anti-religion party, while Iraqi Baath is leaning more towards Pan-Arabism and Islamic heroism. In general, Iraqis are much more conservative than Syrians.

Q: I remember in 2006 I went to see the head of the Communist party in Baghdad and was told he went to Mecca for his pilgrimage duty.

A: Many Baathists are becoming more Pro-ISIS, and leave Baathists thoughts and teaching. As I have mentioned earlier, Naqshabandi members do pray and fast like other Muslims they are not secular as media portrays them. They haven’t even attacked ISIS, so far, and its in ISIS interest to temporarily cooperate with them, for now.

Q: What do u think of the US saying it is going to support PM Nuri al Maliki against ISIS?

A: It is very beneficial for ISIS, because it can bee seen as war against Sunnis in Iraq. The US administration knows that Maliki is sectarian to the bones. Iraq needs core change, the power sharing is based on sectarianism. Even the U.S former Foreign Secretary Condoleezza rice mentioned it in her book (No higher honour).

Q: Could be that Naqshabandi accepts a deal for example, with U.S?

A: The answer is No. These groups can’t accept any deal with the Americans as long as ISIS is around. Other groups share ISIS views like IAI. Ansar Al-Islam already shares most of ISIS views. Many among these groups have defected to ISIS after 2007.

Q: Some are saying ISIS would be very busy on two fronts, Iraq and Syria, which could weaken one (Syria) at the expenses of another (Iraq). Do u approve?

A: No. ISIS in Syria is self-sufficient and not that dependent on Iraq’s ISIS. The war spoils were just a bonus. Many analysts claimed that ISIS will loose the war against other rebel factions back in January. Look how it turned out to our favour. ISIS is just full of surprises, even I was surprised at the rapidity of Mosul offensive. I knew that something was prepared in Salahudin and Mosul since some time they have been but never realised that the surprise attack with other groups will be so rapidly successful. The offensive has started from the East and was aimed to lure the security forces. The main offensive was ISIS cells inside Mosul with cooperation of other groups that started the upraising.

Q: It was also mentioned that Assad-Allah Bilawi’s death accelerated the process. Is it true?

A: Yes, somehow. Nonetheless, it did not have any serious effect since ISIS was already inside Mosul during the offensive and they ambushed surprisingly the security forces.

Q: Why Baghdad as a city is taking so long to fall or to be sieged by ISIS?

A: Baghdad is a big city. There are two million inhabitants in Mosul while in Baghdad there are over six million. The North of Baghdad is a Shia stronghold like Kazimiyeh, Al Sadr city, Sha’la. While ISIS is in the heart of the capital, south of Baghdad, north of Babylon and other places, waiting. We are advancing in Diyala and Kirkuk provinces. But Taji military base and Baghdad airport are in our way. Also, Baiji refinery is also stopping out advance because we should not leave an Iraqi government position behind us when we move toward the capital from all sides.

Q: Yes but how would ISIS break into Baghdad?

A: Many ISIS commanders were officers in the Army, connected to many officers in duty and others retired with connection. Moreover, many have given up of the idea of dying for al-Maliki. Also, our media, The “Clanking of the Swords” have contributed in showing how we kill our enemies. So many Sunni officers and collaborators gave up on the idea of standing against ISIS, particularly those with families in region we operate the most. So we know what is happening everywhere in Iraq.

Q: How the timing of the attack on Mosul was decided and planned?

A: We knew a large operation was under preparation in Salahoddine and Mosul. We were prepared and ISIS Mujahideen were already inside Mosul before the day of the attack.

Q: What about Peshmerga advance in Kirkuk and Qhaniqin?

R: Clashes are ongoing between ISIS and Peshmerga in these disputed areas. We have registered some significant advance and captured many spies we have executed ion the spot. Kurds are not in an ideal position. They took advantage of the situation grabbing the opportunity to bite more land. Iraqi Premier attacked the Kurds and Asaeb Ahl al-Haq leader Qais al-Ghaz’ali threatened the Kurds to be expel form Baghdad.

Q: Do you think you will give up on Kirkuk to the Kurds? P. Masood Barazani called for a general mobilisation to protect not only Kurdistan but also Kirkuk.

A: Many ISIS have an old bitterness against the Kurds for supporting the U.S forces. I agree that the situation is a bit chaotic where Sunni against Shia and Kurds against Sunni and Shia against Kurds for their expansion will and vice versa. ISIS won’t give up on Krkuk.

Q: ISIS is merciless in Syria while we see more tolerance toward some groups in Iraq. Why?

A: True, We have started very harshly in 2006 in Iraq. We have learned our lesson. But also, people in Iraq are different form Syria. If they were the same, we would have behaved similarly.

Q: Could you expand on this?

A: “Dawla” (State-ISIS) is not a group of people but an idea and an ideology. A Manhaj. Mujadideens and Emirs can be killed in the battle field but the ideology will never die. With our ideas, we have attracted people form all over the World. Why do you think Sahwa is fighting against us? For democracy? No! Sahwa fights for their own political benefit while we fight and die for Khilafa and Manhaj. To imply the Islamic Law and this is what creates fire inside of us. We recognise no borders and are all brothers. This attitude brings people within ISIS together.

Q: Are there any plans for Lebanon?

A: No comment. But soon we shall see some serious development very soon.

Abu Bakr commented on Grand Ayatollah Ali Sistani Fatwa Kifa’yi saying: “Why GA Sistani did not issue a Fatwa in 2003 when the Americans occupied the country? This is one of the main reason we have declared war against the Shia because they have supported the U.S forces against Iraqis. Ashaeer in Fallujia and Ramadi were killed randomly. Prior 2003, there war no such a thing as Sunni and Shia in Iraq. The Americans have managed to divide us. It is too late now.”, he said.