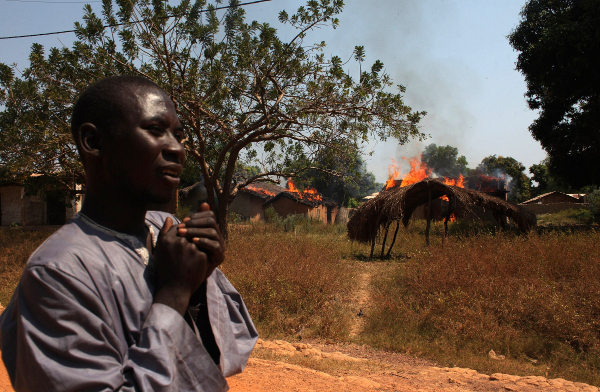 In the early hours of Monday morning, a Christian militia swept down on the village of Ardo-Djobi near Bambari in the Central African Republic killing 18 Muslims of the Fulani ethnicity. Just a few days earlier, Muslim gunmen had attacked Christians in the nearby village of Liwa and killed 21.

The tit-for-tat attacks against rival religious groups in Central African Republic threaten to create the conditions for a genocide reminiscent of Bosnia in the 1990s and requires swift efforts by the government and the international community to stop the violence, said a new report by the International Federation for Human Rights.

The 88-page report released Tuesday details the atrocities committed by both sides in the impoverished country and urged the re-establishment of a legal and penal system to stop the wave of crime and violence and to begin trying those behind the massacres.

“The leaders of the violence and its perpetrators of mass human rights violations are known, we have proof and the government and international community have to take this opportunity and arrest them and end the organized violence,” said Florent Geel, the director of the federation’s Africa Desk, lamenting the lack of jails or security for judges in the country.

The Central African Republic has been rocked by unrest since March 2013 when a largely Muslim alliance of rebel groups known as the Seleka overthrew President Francois Bozize. More than a million people, nearly a quarter of the population, have been displaced by the violence pitting Muslim rebels against Christian militias known as the anti-Balaka.

“Seleka and anti-Balaka forces mirror one another in the horror of the acts that they have perpetrated in the context of a conflict that has become so vile that more people are killed than injured,” warned the report, which was researched with two local human rights organizations between the summer of 2013 and February 2014.

After the Seleka were forced out of the capital and back to the northern and eastern parts of the country, enclaves of besieged Muslims civilians were left at the mercy of the anti-Balaka militias, who soon switched their targets from just those allied to the rebels to all Muslims.

The report’s investigators discovered that the militias were in many cases led by members of the former government military and organized by politicians close to the deposed president. One militia leader told researchers “they all have to leave or die.”

Before the conflict, there were some 800,000 Muslims in Central African Republic and now only about 20,000 remain, scattered around in 16 different enclaves surrounded by hostile militias. It is a situation reminiscent of Bosnia in the 1990s when Serbs attempted to ethnically cleanse Muslim areas, said the report.

There are currently 5,000 African troops and 2,000 French troops in the country which have largely taken over the role of maintaining order, following the disintegration of the government’s army.

Aside from France, the report said the global community has largely been indifferent to the plight of the country.

But ultimately, the report maintained, the key to saving the country is to halt the cycle of violence by ending the impunity of those behind it and restoring of the country’s justice system, something that can only be done with more troops.

Despite the installation of President Catherine Samba-Panza after the Seleka was pushed out of the capital, there has been little evidence of a central authority and even the most brazen crimes go unpunished. Militia leaders arrested by international forces are soon at large again, said the report. It recommends the creation of an interim legal system — including building functional jails.

Help may come with a new 12,000-strong U.N. force set to start arriving in September, but even that number may not be enough, said Geel of human rights organization. He said Central African Republic “could become a sanctuary for armed groups, instability and mercenaries so it has to be fixed quickly.”