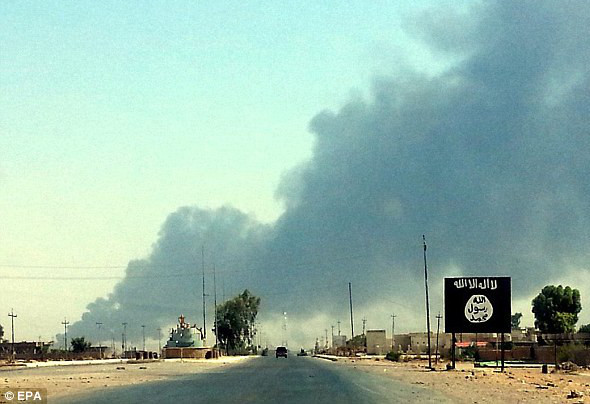 Islamist-led militants and pro-government forces are engaged in fierce battles for the Baiji oil refinery and Tal Afar airport in northern Iraq.

Baiji, Iraq’s biggest refinery, is surrounded by the rebels, who say they have seized most of Tal Afar airport.

The fighting comes a day after the US said it would send some 300 military advisers to help the fight against the insurgents.

President Barack Obama stressed that US troops would not fight in Iraq.

US Secretary of State John Kerry is expected to travel to Iraq soon to press for a more representative cabinet, hoping this could ease tensions between the country’s rival Muslim sects.

The country’s highest Shia religious authority, Grand Ayatollah Ali al-Sistani, has called for a new government to be set up quickly now the results of recent elections have been ratified.

He said a new government needed to aim for “broad national acceptance” and to “remedy past mistakes”.

Correspondents say that will be seen by many as criticism of Iraqi Prime Minister Nouri Maliki.

Mr Maliki has been accused of pursuing anti-Sunni policies, pushing some Sunni militants to join the jihadist Islamic State of Iraq and the Levant (Isis), which has made rapid advances in recent days.

About 500,000 people have fled their homes in the country’s second-largest city, Mosul, which Isis captured last week.

The UN estimates that that brings to about one million the number of people displaced within Iraq as a result of violence this year.