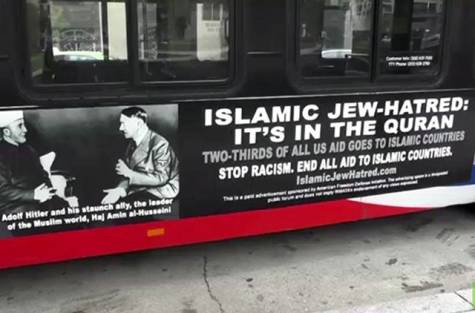 It has been posted on many buses in Washington, D.C., for few weeks provoking Muslims and non-Muslims alike.

Muslims in the US, supported by several Christians and Jewish leaders, united in their efforts to respond to the ads claiming that it is false that the Quran, holy book for Muslims, encourages Muslims to hate Jews.

They responded by posting another advertisement refuting the original ads placed by a group led by anti-Islam activist Pamela Geller.

“We normally ignore provocation of this nature because she (Geller) has been, along with other organisations, involved in propaganda against Muslims and Islam in the US,” said Nihad Awad, National Executive Director of CAIR (Council on American-Islamic Relations).

But, “when their campaign tried to influence the public opinion with false information, then we have to counter that with accurate information about Islam and Muslims,” Awad added in an interview with Gulf News.

“Therefore, our message that is going on buses (from Wednesday morning) in D.C., is an inclusive, interfaith message. It helps the public learn about the Quran from the Quran itself,” Awad said.

Also, CAIR plans to re-launch another campaign to distribute copies of Quran translated to English to anybody interested from the public.

Earlier, nearly 80,000 copies were distributed, “so the public has access to authentic formation about Islam,” Awad said.

Asked whether they plan to take another step, Awad replied “in the US, the first amendment (of the constitution) guaranteeing every one the freedom to speak, even to speak hatred. That is one reality we live,” Awad said.

“This is a distortion to facts and exploitation to history,” commented Mohammad Ghuneim, a veteran former Arab-American broadcast journalist on the ad, in an interview with Gulf News.

The ad’s declaration that two-thirds of the US aid go to Islamic countries is not true. Israel is the biggest beneficiary of US aid with nearly $11 billion a year, he said.

As for the picture in the ad of Adolf Hitler sitting next to the late Palestinian religious and revolutionary leader Haj Ameen Al Husseini, Ghuneim commented since “everybody is against Nazism, they are trying to relate Islam to Nazism,”.

Al Husseini, who was the Mufti of Palestine under the British mandate, was one of the main leaders in the Palestinian revolution in the thirties of the last century. Al Husseini was sentenced to death by the British colonial authorities, but managed to escape and travelled to Germany in 1939.

“Al Husseini was not a supporter to Nazism. It (Germany) was the only place he could resort to escaping the British pursuit,” he said.

Awad believes that those behind the provocative ad “are trying to spread false information about Islam and Muslims… These are experts in misinformation so the public will be confused.”

However, many non-Muslims criticised the campaign as hateful and prejudice, including some Jewish religious leaders.

Rabbi Rachel Gartner, board member of the T’ruah: The Rabbinic Call for Human Rights posted a response to the provocative bus ad.

“As an American, I insist on the right to free speech, even when I deplore the message. As a rabbi, I insist on the responsibility to speak out against hateful speech, particularly when it comes from one of our own,” she said in her article posted on the Huffington Post website.

“Ms. Geller, here’s what I have to say. If you have a political statement to make: first , check that it’s not actually hate speech in political garb. Secondly. Keep the Quran out of it. Unless you also want to reference suras like this one (there are many): “Indeed, I, God, sent down the Torah, in which was guidance and light, and the prophets judged by it, as did the rabbis and scholars.” (Quran 5:44). Thirdly, be righteous in the way you engage religious texts — others’ and our own — in all contexts.”