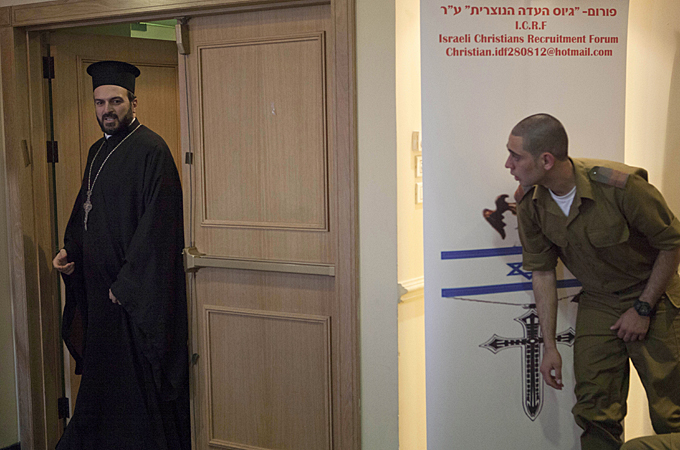 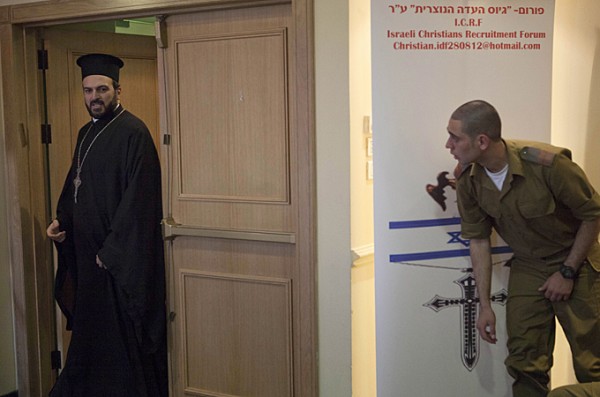 The leaders of Israel’s large Palestinian minority are stepping up opposition to Israeli government plans to recruit Christians into the military with a specially convened congress last Friday.

The congress, due to be held in the Galilee town of Sakhnin, will include all the minority’s political factions. It follows an announcement in April from the Israeli Defence Forces that all Christians would receive call-up papers on graduating from high school. An initial batch of 800 papers is due to be issued in the coming weeks.

“The congress will make clear that there is a national consensus against serving in the military and the government has crossed a red line,” said Nadim Nashef, director of Baladna, a youth movement that has led opposition to the government drive.

The Israeli military has insisted that the notices will be treated as an “invitation”, but Nashef said it was widely assumed that Israel intended to impose a compulsory draft at a later stage. Unlike Israeli Jews, most of Israel’s 1.5 million Palestinian citizens, comprising a fifth of the country’s population, have been exempted from conscription since the state’s establishment more than six decades ago. Many in the minority fear the change in official policy is intended to fuel tensions with their Muslim compatriots, as part of a “divide and rule” policy.

Netanyahu personally backed enlistment for Christians after a Nazareth priest, Jibril Nadaf, went public with his support 18 months ago. Last summer, Netanyahu held a press conference with Nadaf at which he said: “The Christian youth must be allowed to go into the IDF. You are loyal citizens who want to defend the country, and I salute and support you.”

The congress takes place as Palestinian leaders have expressed disappointment that Church leaderships have failed to take a decisive stand against Israel’s enlistment drive. There had been widespread hopes that Pope Francis’ visit to the region last month would provide an opportunity for him to speak out gainst the move.

However, the pope made no mention of the issue during his three-day visit. He has yet to respond to a letter sent to him in February by Basel Ghattas, a Christian member of the Israeli parliament. He also broke with the precedent set by predecessors by not venturing to the Galilee, where most of Israel’s 130,000 Palestinian Christians live.

Hana Swaid, the only member of the Israeli parliament from the Roman Catholic community, said he was “astonished” that the Pope had not made time to meet with him or other leaders of the Christian community. “Army service will only add to the pressures on the Christian community here. It makes it even more likely that Christians will leave the region, seeking to make a new life overseas,” Swaid said.

He added that recent threats from Jewish extremists against the Christian community, including a wave of attacks on holy sites, had further contributed to feelings that life was not safe for religious minorities in Israel.

Ghattas told Al Jazeera that the Greek Orthodox Church had demonstrated a similar reluctance to intervene.

Last month, hopes were briefly raised when Isa Musleh, a senior official with the Greek Orthodox Patriarchate, announced that Nadaf had been sacked. He issued a statement saying: “We warned him before to keep to his priestly duties and not to interfere in matters of the army.” But the Patriarch himself, Theophilos III, is reported not to have enforced the decision, with Nadaf advised instead to keep a low profile.

“The Patriarch knows Netanyahu has made this his personal cause and is afraid the Church will face severe sanctions if he is seen to be punishing Nadaf,” Ghattas said. He added that the Church leaderships had many “complex and murky interests” in Israel, especially concerning ownership of land, tax affairs, and the need for clerical visas.”

Bishop Isychios, a spokesman for the Patriarch, declined to respond to questions, including on whether Nadaf had been sacked. Nadaf has since become the spiritual leader of a Forum for Christian Recruitment, established by a small group of Christians who volunteer in the Israeli military. He has been widely feted by the Israeli right.

The Forum’s spokesman, Shadi Halul, a reserve paratrooper, told Al Jazeera that it was natural for Christians to want to serve Israel. “We are part of this country. Israel protects us and offers us the chance to live in peace in the region.” He said most Christian leaders in Israel lived in fear of the Muslim population, which comprises 80 percent of the Palestinian minority. Referring to sectarian fighting in neighbouring Syria and Egypt, he said: “Our [Christian] brothers are being persecuted and slaughtered only a short distance away.”

According to the IDF, about 2,000 Christians reach the age of conscription each year. Despite the government’s promotion of enlistment, only about 150 Christians are reported to be serving. Riah Abu el-Assal, the former Anglican bishop of Jerusalem, said the Forum represented only a very small minority of Christians in Israel. “The reality is that most Christians do not want to serve and will not respond to the call-up.”

Opponents of enlistment among the Palestinian minority have staged a series of protests.

In April, youths in Nazareth took over a central square dressed as soldiers and harassed passersby at a mock checkpoint to highlight what military service entails. A pamphlet warned that Israel wanted to achieve “the disintegration of the Palestinian national minority into warring sects”. A similar demonstration took place in the city of Haifa a fortnight ago.

Last month, Ghattas interrupted a meeting of the parliament’s interior committee to which Nadaf had been invited, calling him a “traitor” and “agent for the Shin Bet”, a reference to Israel’s secret intelligence service. He told Al Jazeera that the government was cracking down on any criticism of Nadaf, including by calling in people for interrogation. “It is like we have gone back to the 1970’s when the Shin Bet sought to control our political life,” Ghattas said.

There have been several demonstrations on university campuses. During one at the Hebrew University in Jerusalem in April, three students were arrested.

A political activist in central Israel, Ghassan Munayir, was also arrested in April after posting on Facebook photographs of Nadaf and other Christians meeting the finance minister, Yair Lapid, to discuss drafting Christians. He was released on house arrest, but only after agreeing to the confiscation of his computer and phone.

Ghattas said the police had disrupted efforts to hold protest meetings in Christian communities by threatening to revoke the licence of any public venue owner who agreed to host them.

Palestinian leaders in Israel are also concerned by related efforts to establish a separate legal status for Christians and Muslims. In February, the parliament passed a law that, for the first time, provides recognition of Christians as a separate minority from Muslims.

Yariv Levin, who drafted the law and is a leading member of Netanyahu’s Likud party, told Israeli media that the legislation was meant to “connect us [the Jewish majority] and the Christians”. He added: “They’re our natural allies, a counterweight to the Muslims who want to destroy the country from within.”