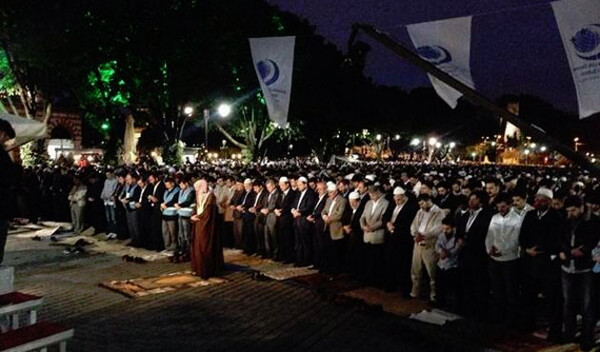 ISTANBUL – Tens of thousands of Turkish Muslims have gathered on Saturday dawn to pray outside historic Aya Sofia (Hagia Sophia) museum, urging Prime Minister Tayyip Erdogan to reopen it as a mosque.

“This is a serious push to break Ayasofya’s chains,” Salih Turan, head of the Anatolia Youth Association, which has collected 15 million signatures to petition for it to be turned back into a mosque, told Reuters.

“Ayasofya is a symbol for the Islamic world and the symbol of Istanbul’s conquest. Without it, the conquest is incomplete, we have failed to honor Sultan Mehmet’s trust,” he said, citing a 15th Century deed signed by the conquering Caliph and decrying as sin other uses of Aya Sophia.

A church for over 1,000 years, and a mosque for 500 more, Aya Sophia is the most spectacular building in Istanbul.

The church was turned into a mosque after Constantinople was taken by Sultan Mehmet II in 1453.

Extraordinary masters of the Ottoman Empire architects repaired the building extensively in the 16th century, providing greater exterior support for the dome and the walls. Minarets were also added.

Yet, a Turkish secular law in 1934 barred religious services at the 6th-century monument, a decision that has applied ever since.

Last year, Deputy Prime Minister Bulent Arinc stood outside Aya Sophia in November and said he “prayed to God it would soon be smiling again,” then cited a law forbidding houses of worship to be used for other purposes.

Ibrahim Kalin, a senior Erdogan adviser, asserted there were no plans to alter the monument’s current status.

“Speculation on changing it into a church or a mosque remains speculation,” Kalin said.

“Hagia Sophia has been open to all visitors from Turkey and around the world and will remain so.”

Though the Turkish government has assured its rejection to the request, any pledge to re-open Aya Sofia as a mosque was threatening criticism from nationalist voters.

“It would strengthen the mutual suspicion and polarization between the West and the Muslim world,” Sahin Alpay, a professor of political science at Bahcesehir University and a columnist for the Zaman daily, said.

“All hell breaking loose is a high price to pay.”

The US Commission on International Religious Freedom, a bi-partisan advisory panel set up by Congress, said in a statement last week that such a move would threaten Turkey’s international standing and recall its mistreatment of Christians over the last century.

“Whether driven by political considerations tied to Turkey’s forthcoming elections, or for any other reason, opening Hagia Sophia as a mosque would clearly be a divisive and provocative move,” it said, calling on Erdogan to affirm its current status.

“If its status is to change and it will be opened anew as a place of worship, then it cannot be forgotten that it was built to be a church, and that requires it be opened as a church again,” Bartholomew told Agos newspaper on Thursday.

At the height of its power (16th–17th century), the Ottoman Empire spanned three continents, controlling much of Southeastern Europe, Western Asia and North Africa.

It contained 29 provinces and numerous vassal states, some of which were later absorbed into the empire, while others gained various types of autonomy during the course of centuries.

The empire also temporarily gained authority over distant overseas lands through declarations of allegiance to the Ottoman Sultan and Caliph.

The Ottoman Empire was succeeded by the Republic of Turkey, which was officially proclaimed on October 29, 1923.

Under Erdogan, many Turks have come to embrace their imperial Ottoman past and question the more austere, Western-oriented reforms that followed the last sultan’s overthrow in 1923.

“Conquest is the removal of shackles on doors and in hearts,” he said on Thursday to mark the 561st anniversary of the Byzantine defeat.