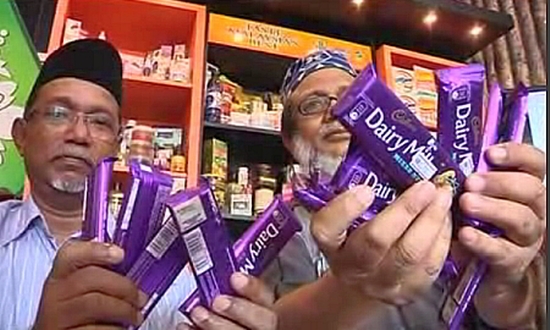 Indonesian authorities said on Friday they were testing products made by British confectioner Cadbury to check they complied with Islamic standards after two chocolate varieties in neighbouring Malaysia were found to be contaminated with pork DNA.

The scandal over the ingredient banned under Islamic dietary laws has sparked outrage among some Muslim groups in Malaysia, who have called for a boycott on all products made by Cadbury and its parent Mondelez International Inc.

Concerns over halal food standards could jeopardise Mondelez’s sales in Muslim markets that are larger than Malaysia, such as Indonesia, home to the world’s largest Muslim population, and the Middle East.

“After such an incident, it is prudent to do a test on the other variants to see if they also have traces of the pig DNA. We may have the result in a few days,” Roy Alexander Sparingga, head of Indonesia’s Food and Drug Monitoring Agency, told Reuters.

Sparingga said the tests would be done on the 10 varieties of Cadbury products that are certified in Indonesia as halal – or permissible according to Islamic law. Those products did not include the two types of Dairy Milk chocolate that Cadbury Malaysia recalled this week after finding pork traces.

Malaysian Islamic authorities tried to cool anger against Cadbury by saying it remained unclear if the contamination was the company’s fault.

“People need to understand that we can’t immediately take action against Cadbury when there’s no solid evidence yet or if contamination occurred in the factory itself or if it was external factors,” said Othman Mustapha, the director general of Malaysia’s Department of Islamic Development, or JAKIM.

“What’s happening to Cadbury now is akin to a person who’s remanded and placed in lockup. They have not been found guilty so this is just a suspension,” he added.

JAKIM, which is responsible for awarding halal certification in Malaysia, is conducting further tests on the suspect Cadbury products to confirm the initial findings by the health ministry.

Cadbury Malaysia said in a statement that it had withdrawn the two products as a precaution and that it had no reason to believe there was pork-related content in its other foods.

“We stand by our halal certification and we have the highest levels of product labelling standards,” it said.

Products in Muslim nations are regularly checked to ensure they are halal. Besides pork, items considered non-halal by Muslims include alcohol and the meat of animals and birds that have not been slaughtered according to Islamic rites.

Non-halal food scandals have erupted in Southeast Asia before. In 2001, Japanese food giant Ajinomoto Co Inc became embroiled in a similar case after the Indonesian Council of Ulemas, the highest Islamic authority, accused the company of using pig enzymes in the production process of the widely used seasoning monosodium glutamate.

The then Indonesian president stepped in to try to defuse the row which had hit the company’s share price. Ajinomoto’s local company subsequently publicly apologised and withdrew some products from the Indonesian market.

On Thursday, a Malaysian Muslim retail group said it would ask the 800 stores it represents to stop selling all products made by Cadbury, Mondelez and U.S. food giant Kraft, which acquired Cadbury in 2010 in a $19-billion deal. Together with a Muslim consumer group, it called on Malaysians to boycott all those companies’ products.

Mondelez is the name of what remains of Kraft Foods Inc after it spun off its North American grocery business as Kraft Foods Group. Its brands include Oreo cookies and Ritz crackers.

Malaysia’s National Fatwa Council, which issues official guidance on Islamic issues, said on Friday it supported the withholding of halal status on the two Cadbury products but that the company should not be punished unless the breach was proven to be intentional.

“The authorities need to do their investigation to see if the accusations are valid, and to see where the pollution happened, whether it was deliberate or accidental,” Abdul Shukor Husin, the council’s committee chairman, told Reuters.

“Muslim people who had consumed the product that had been certified halal but contained pig DNA should not worry about the purity of their bodies. Islam is not a rigid religion.”