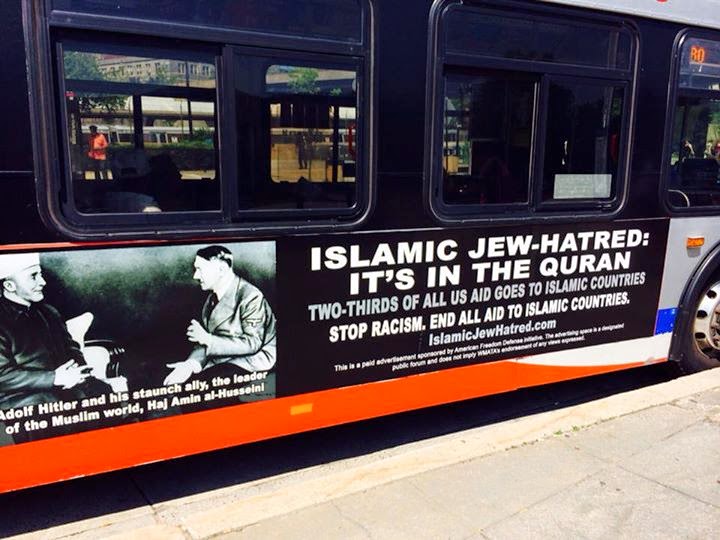 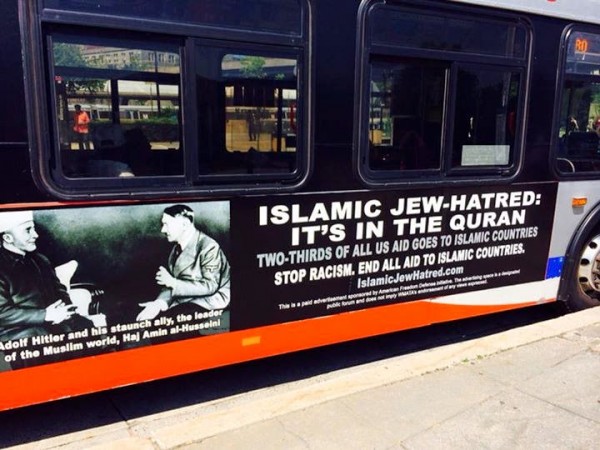 Islamophobes are fabricating the myth that Islam promotes Jew-hatred by taking out ads on D.C. buses. Take a look at the ad, linked above, does anyone else find it insane that these ignorant people are spending money promoting pictures of Adolf Hitler?

Now, certainly some Muslims are anti-Jewish, as are some Christians, agnostics, atheists—you get the idea. However, nothing in the Qur’an or in Prophet Muhammad’s example supports the myth of “Islamic Jew hatred.”

As I detail in my upcoming book, EXTREMIST, an objective study of Islam demonstrates that the myth of Islamic Jew hatred crumbles like a house of cards.

Those who proclaim Islamic Jew-hatred deliberately misrepresent the Qur’an 7:167—among several more verses. My analysis of 7:167 below—which is equally applicable to any allegedly “anti-Jew” verse—demonstrates without question that nothing here is “anti-Jewish.” But to remain objective, I reference Dr. Philip Jenkins—a prolific non-Muslim academic—who, on the question of Islamic Jew-hatred writes in his book Laying Down the Sword:

“In order to make such texts look vicious, anti-Islamic critics systematically exaggerate the Jewish element in the passage… The Qur’an offers nothing vaguely as explicit as the New Testament passages in which Jesus himself, who is for Christians the incarnation of the Divine, speaks so furiously against “the Jews.” It is the Jesus of the New Testament who calls his enemies the children not of Abraham but of the Devil, the Father of Lies. [But Jesus] was not condemning all Jews in any racial sense, but was rather attacking rival factions and leaders in his day. And that is the model we find in the Qur’an. In reality, the Qur’an has nothing that need be taken as a condemnation of Jews, or of any ethnic group.”

The Qur’an instead condemns unjust behavior while lauding just behavior—regardless of the person or people committing the act. Simply reading 7:166 and 7:167 together illustrates this point:

“And when [the Jews] forgot all that with which they had been admonished, We saved those who forbade evil, and We seized the transgressors with a severe punishment because they were rebellious. And when they insolently rebelled against that which they had been forbidden, We said to them, “Be ye apes, despised!”

Far from “Jew hatred,” the Qur’an 2:63 repeatedly declares that the Jews shall attain eternal paradise. The Qur’an mentions Prophet Moses by name more than any other prophet—over 150 times— and Islam recognizes the Divine origin of the Torah and the Psalms of David. Prophet Muhammad’s benevolent treatment of Jews attracted their love for him. Safwaan bin Assal relates, “some people among the Jews kissed the hands and feet of the Prophetsa.” It is impossible to consider that a man could garner such love from his citizens with force or violence. Following this example, throughout Islamic history the Jews flourished under Muslim rule in parts of North Africa, Jerusalem, Persia, and Spain.

As Jenkins notes, it is the Gospel of John that incites fear of the dangers Jews posed to Christ, names Jews as dogs, swine, and snakes in Matthew, and declares the Jews’ father is the devil again in John. Martin Luther thus wrote, “What then shall we Christians do with this damned, rejected race of Jews? …their synagogues should be set on fire…their homes should likewise be broken down and destroyed…rabbis must be forbidden under threat of death to teach any more… [let us] be free of this insufferable devilish burden—the Jews. Pope Clement VIII added, “All the world suffers from the usury of the Jews, their monopolies and deceit.”

Thousands of Jews were murdered during the Crusades, the Spanish Inquisition, and at various times in Europe and Russia. The wordghetto owes its origin to the slums of Venice where Jews lived. Father Charles Coughlin commanded a weekly radio audience of more than thirty million Americans in the 1930s and openly supported anti-Semitism, Adolf Hitler, and Benito Mussolini. And lest we forget, Hitler identified as Christian.

Thus, blindly blaming Islam—which is responsible for none of the above atrocities—ignores that anti-Semitism is a worldwide epidemic. The Anti-Defamation League, in its 2012 report on anti-Semitism in ten European countries concluded, “As with previous surveys, data from this latest 2012 European tracking poll indicates that significant percentages of European respondents continue to believe in some of the most pernicious anti-Semitic stereotypes.” A 2011 ADL poll found that about 15 percent of the US population—forty-five million Americans—“fall into the most anti-Semitic co-hort.”

This allegation of Islamic Jew-hatred is dangerous because it is meritless, creates an irrational fear of Islam and of Muslims, and ignores the factually proven growing anti-Semitism in Europe and America. Per Islamic teaching, Prophet Muhammad treated Jews as equals and with compassion. So enough of these ridiculous bus ads—find something productive to spend your money on. Let’s stop blindly blaming Islam for anti-Semitism and instead work together to root out anti-Semitism wherever it exists.