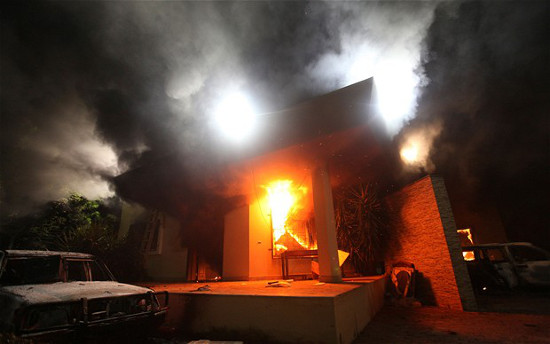 Except for the 2012 deadly attacks on the U.S. diplomatic mission and CIA annex in Benghazi, Libya has dropped out of American news coverage since President Obama and NATO’s so-called humanitarian intervention in 2011. The American public has been led to believe that except for that terrorist outburst, things have been going pretty well in the country formerly ruled by Muammar Qaddafi.

So it might come as a surprise that Obama has sent over 200 marines along with Osprey aircraft to Sicily in case the American embassy in Tripoli has to be evacuated. According to an administration official, the reason for the move is the “deterioration of the security situation” in the capital.

All has not been well in Libya since the U.S. military led NATO forces in an air campaign to overthrow Gaddafi. American officials assured us that “moderates” would succeed the cruel and unpredictable dictator, who had become a U.S. ally during the Iraq war. However, it turns out that the moderate victors were not so moderate; in fact they resembled al-Qaeda. Was the Obama administration, propelled by then secretary of state Hillary Clinton, then UN ambassador Susan Rice, and then National Security Council staffer Samantha Power, being a bit disingenuous because it was desperate to appear to be on the side of the Arab Spring after opposing the Egyptian people’s struggle for democracy in favor of the loyal U.S.-backed dictator Hosni Mubarak in 2011?

As the Independent’s Middle East correspondent Patrick Cockburn points out, American officials have tended to exaggerate the power of the al-Qaeda organization, but Obama, for political reasons, did precisely the opposite in Libya’s case:

They played down any similarity between al-Qa’ida and the Nato-backed rebels fighting to overthrow the Libyan leader.… This was done by describing as dangerous only those jihadis who had a direct operational link to the al-Qa’ida “core” of Osama bin Laden. The falsity of the pretence that the anti-Gaddafi jihadis in Libya were less threatening than those in contact with al-Qa’ida was forcefully, if tragically, exposed when US ambassador Chris Stevens was killed by jihadi fighters in Benghazi in September 2012. These were the same fighters lauded by governments and media for their role in the anti-Gaddafi uprising.

Since then, Libya has been anything but peaceful or moderate. And now Libya, Cockburn writes, “is tipping toward all-out civil war as rival militias take sides for and against an attempted coup led by a renegade general that has pushed the central government towards disintegration.”

The renegade general is Khalifa Hifter, an anti-Islamist whose forces “stormed the parliament building in Tripoli at the weekend, after earlier attacking Islamist militia camps in Benghazi.” Government leaders have summoned Islamist militias for help. Cockburn says what’s happening now is the worst violence since the regime change.

Cockburn notes that Hifter, “who in the 1980s fought for Gaddafi in Mali but defected to the US, where he lived for many years, returned to Libya in 2011 but played only a limited role in the revolt.” His militia, Cockburn says, is one of many that operate throughout Libya.

The threat of civil war is not the only result of Western intervention in Libya. The overthrow of Gaddafi is a lesson in the dangers of interfering with other countries. He was a brutal dictator, of course, and the people would have been justified in kicking him out. But outsiders can never know what will follow their intervention. In this case, regime change produced a flow of weapons and jihadi training opportunities that in turn led to violence in Mali and the horrific abductions in Nigeria by Boko Haram. As Brendan O’Neill of Spiked Online writes,

Nothing boosted Boko Haram’s fortunes so much as the West’s assault on Libya in 2011. It was that vain bombing war, that Western-led dismantling of a regime that cohered Libya and its border regions for 40-plus years, which created new spaces in West Africa in which Boko Haram could train, get hold of weaponry and, in the words of one Nigerian observer, become more “audacious” than ever.

The first rule governments should follow is, “Do no harm.” The second rule is, Assume that intervention will do far more harm than good.