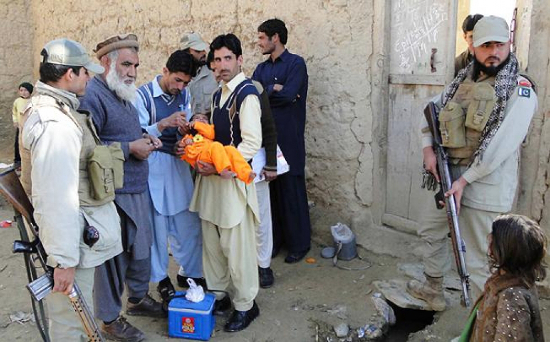 Polio had been battled to near-extinction after decades of effort, but this year the WHO confirmed 68 new cases and declared it an international public health emergency. Nearly 80 percent of those cases are in Pakistan.

Why is this? According to the New York Times‘ Donald McNeil Jr. (5/6/14), “Polio has never been eliminated there, Taliban factions have forbidden vaccinations in North Waziristan for years, and those elsewhere have murdered vaccine teams.” McNeil also quotes a WHO spokesperson towards the top of the piece: “So we’re saying to the Pakistanis, the Syrians and the Cameroonians, ‘You’ve really got to get your acts together.”‘

The Times underlined the emergency today in an editorial, explaining that Pakistan has such high numbers “largely because Taliban factions have forbidden vaccinations in conservative tribal areas and attacked healthcare workers elsewhere.”

There’s a crucial piece of information missing here one that these outlets know full well. In 2011, the British Guardian (7/11/11) reported that the CIA used a fake vaccination drive led by Pakistani Dr. Shakil Afridi to gain entry to bin Laden’s compound and gather DNA to confirm his presence there. As McNeil himself reported in 2012 (7/9/12), that revelation led to suspicion and banning of vaccination teams in the tribal areas of Pakistan. At the time, the WHO argued that, while it was a “setback…unless it spreads or is a very longtime affair, the program is not going to be seriously affected.”

Then the killings started; the Times reported several times on killings of polio vaccination workers in Pakistan, noting in June 2013 that these attacks “escalated” after the revelation of the CIA plot. And the following month, McNeil reported that after Dr. Afridi was sentenced to 33 years in prison for treason, “Anger deepened when American lawmakers called Dr. Afridi a hero and threatened to cut off aid if he was not released.”

Fast forward to this week, and CBS Evening News (5/5/14) likewise avoided the CIA connection in reporting the most recent story, as anchor Scott Pelley noted: “Most cases are in Pakistan, where vaccine workers have been murdered on suspicion that they’re spying for the United States.”

The PBS NewsHour (5/6/14) was one of the only outlets that mentioned the CIA issue, in a report by correspondent Jeffrey Brown:

BROWN: Dr. Anita Zaidi, a pediatrician, cited a fake vaccination campaign that the CIA used in the hunt for Osama bin Laden.

ZAIDI: Which has hugely damaged public health programs, not only in Pakistan, but in many, many countries, because people ask all kinds of questions. They now think that they might—the vaccine programs might be actually spy operations.