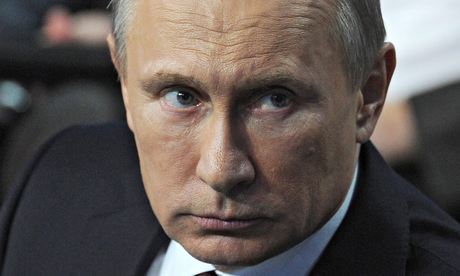 Vladimir Putin gave his clearest signal yet that he aims to break up the global nature of the internet when he branded the network a “CIA project” on Thursday.

The Russian president told a media conference in St Petersburg that America’s overseas espionage agency had originally set up the internet and was continuing to develop it.

Putin has long hinted that he wants a Russian-run alternative. The idea of breaking up the internet has gained ground in Germany, Brazil and elsewhere round the world in the light of the revelations by whistleblower Edward Snowden about the extent to which the US National Security Agency has infiltrated Facebook, Skype and other social media.

Snowden‘s critics say that an unintended consequences of his revelations has been to undermine the global nature of the web as well as playing into the hands of dictators. His supporters counter that it is the NSA rather than Snowden that has damaged trust in the service.

During a recent national televised question and answer session, Putin batted away a question from Snowden who won temporary asylum in Russia after having his US passport revoked about whether Russia also intercepted and stored communications harvested from the internet, as the US did. “I hope we don’t do that,” he said to applause from the studio audience. “We don’t have as much money as they do in the US.”

A purely Russian-run system could make it easier for the Russian intelligence services to monitor and control traffic. The Kremlin already has powerful tools in place for this, but nonetheless the internet offers a platform for Russian opposition groups denied a voice on the country’s television and radio. At the same media conference, Putin also referred directly to the most popular search engine in Russia, Yandex – a reference that caused its shares to plummet.

Putin’s St Petersburg comments could herald the most serious challenge yet to the world wide web, which was founded by the British computer scientist Sir Tim Berners-Lee.

Putin claimed the “CIA project” was still developing and that Russia needed to be protected from it. The nation had a duty to resist that influence and fight for its interests online, he said.

His remarks come in the wake of a law passed by the Russian parliament this week requiring foreign social media websites to keep their servers in Russia. The law also requires them to save all information about their users for at least six months.

Putin, in referring to Yandex, criticised the company for its registration in the Netherlands, “not only for tax reasons but for other considerations too”. He was responding to a questioner who complained that Yandex was storing information on servers abroad, potentially compromising Russian security.

Snowden has previously faced criticism from within America for accepting asylum in Russia but failing to speak out against the authoritarian nature of the regime. After addressing Putin last week, he was accused of putting a softball question to him.