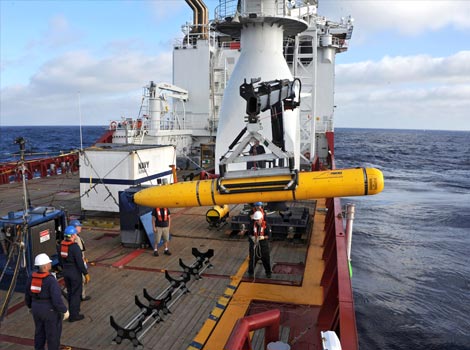 An autonomous underwater vehicle is to be deployed in the search for the missing Malaysia Airlines plane after nearly six weeks of fruitless searching, the head of the Australian agency supervising the search says.

Searchers said on Monday they were confident they knew the approximate position of wreckage of the Boeing 777, some 1,550 km northwest of Perth, and said they were moving ahead on the basis of four acoustic signals they believe were from its black box recorders.

“Despite the lack of further detection, the four signals previously acquired taken together constitute the most promising lead we have in the search for MH370,” Angus Houston, the Australian search chief, told reporters in Perth.

“The experts have therefore determined that the Australian Ocean Shield will cease searching with a towed pinger locator later today and deploy the autonomous underwater vehicle, ‘Bluefin-21’, as soon as possible,” he said, referring to the US Navy device designed to detect the tell-tale “pings”.

The batteries in the plane’s black box are now two weeks past their 30-day expected life and searchers will be relying on sonar and cameras on the Bluefin-21 to detect the box.

Houston said although an oil slick was located in the search area on Sunday evening, he was pessimistic about the likelihood of finding any of the floating debris.

“The chances of any floating material being recovered have greatly diminished and it will be appropriate to confer with Australia’s partners to decide the way ahead later this week,” Houston said.

Malaysia Airlines Flight MH370 disappeared soon after taking off on March 8 from Kuala Lumpur bound for Beijing with 227 passengers and 12 crew on board.