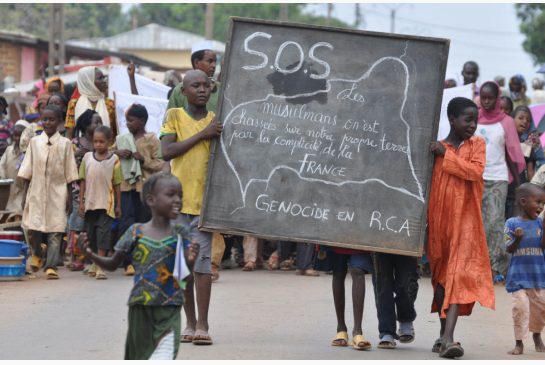 The Central African Republic (CAR) which has a population of 4, 422, 000 consists of 80% Christians and 15% Muslims. Central African Republic has been in a state of conflict since 2012. In 2014, a Christian group called ‘Anti-Balaka’ massacred Muslim civilians aiming at ethnic cleansing of Muslims in CAR. According to United Nations, the hatred between Christians and Muslims has reached a ‘terrifying level,’ women and children are being killed daily. According to ‘World Bulletin’, Muslim women are being enslaved by the Christians Militia. Washington Post reports that Muslims are living in a state of constant fear and starvation. Many children as young as 3 or 4 years have died of hunger.

This has forced Muslims to flee the country, entire Muslim communities have disappeared. CARs capital has seen its Muslim population drop from 130,000 to 1000 over the past few months. According to United Nations, entire Western half of country has been cleansed of Muslims. Despite this horrifying situation, the Muslim media remains silent in all the Muslim countries! Only a few newspapers have reported about the heinous crimes committed against the CAR Muslims.

Media is the strongest tool of this era and we need to use it judicially. I condemn the silence of the Muslim media on the brutality against our brothers and sisters living as a minority in CAR. I strongly recommend Muslim media, including news papers, TV channels, magazines and bloggers to cover this issue and raise voices against the cruel persecution of CAR Muslims at hands of Christians Militia.