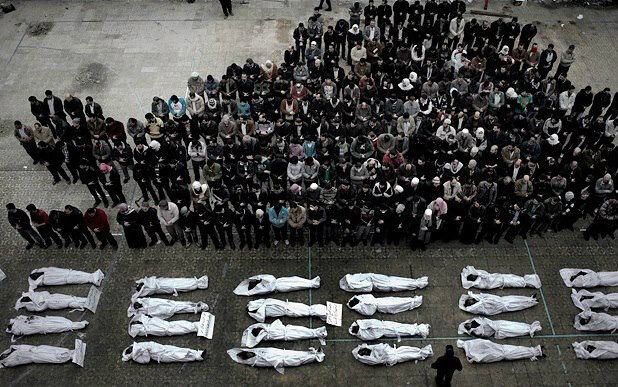 A funeral in war-ravaged Syria.

Every single day, we come across numerous instances of how a man stabs his brother to death on a dispute of land, how a husband kills his wife just on some baseless suspicion or personal quarrel, how a son murders his father because he is not allowing him to marry the girl he wishes to.

When we rise in the morning and watch the news on TV or read the newspaper, we are confronted with the same sad news: violence, crimes, wars, and disasters. There isn’t a single day without a report of something terrible happening somewhere. Even in these advanced and modern times it is clear that  precious human life is not safe.

Due to constant exposure we now go through these types of news without any shock and astound. These sorts of killings and murders have become so common that they do not affect us anymore.

We can say that people have become so self-centered and inhuman that they can go to any extent in their greed for money and power. It is not confined to some individuals only. Even different groups, tribes and nations battle with one another resulting into the loss of valuable lives.

It seems as if everyone is thirsty of each other’s blood. At present human lives are killed on larger scale. People are commonly murdered on trifle issues; even a minor matter leads to the cost of innocent lives. Human blood flows like water everywhere.

In fact, we have totally forgotten the sense of humanity. Does the word humanity still exist among us?

Even animals do not kill their own species in this manner. It is only within human beings that out of cruelty or rage, out of gain or revenge they harm others by violent means.

In reality, killing is one of the most heinous crimes which a person can commit. No thing or possession is more valuable than human life, and since one cannot give life to a person, one has no right to take it away.

Killing innocent people is against all religions, ethics and moral values. Without doubt anyone who believes that by doing such heinous acts, they shall go to heaven is absolutely wrong, for Allah surely does not accept such malicious “offerings”.

Islam is a religion that opposes racism, ethnic bigotry, tribalism, and its newer version, nationalism. Differences of language, colour, cuisine and accent were meant to add flavor to life, not to be used to ridicule, much-less to fight or kill each other.

In fact, Islam is a practical religion and does not allow indulgence in empty and futile theorizing. It says that faith is not a mere profession of beliefs, but rather that it is the very mainspring of life.

According to Islam the biggest sin on earth is shirk (idol-worship, to associate anyone or anything with Allah). And the second biggest sin is killing an innocent person.

To kill a person under some unjust pretexts is such a great and terrible sin before Allah that to kill one person is like killing the whole of mankind.

Allah Subhanahu-Wa-Taala mentions in the Quran:

So how can anyone put himself into the place of an attorney general, judge and executioner at the same time and kill a person?

So, our Lord does not want even one innocent person to be killed unjustly and does not regard it as a small sin or a slight incident. He tells in another verse:

“If a man kills a believer intentionally, his recompense is Hell, to abide therein (forever)” (Al-Nisa: 93)

All the great religions in the world despise the unlawful killing of the innocent and the oppressed.

According to the Bible (The Ten Commandments)

The warning is further given:

“God’s curse on anyone who murders an innocent person” (Deuteronomy 27:25) proves the argument how big crime a killing is.

One of the renowned philosophers of his time Mahatma Gandhi said;

Science and technology have worked wonders in many fields, but the basic human problems remain the same.

We can only conclude that there must be something seriously wrong with our progress and development, and if we do not check it in time there could be disastrous consequences for the future of humanity.

Instead of killing and hurting each other we should be forgiving and pardoning. We must respect and value humanity.

In fact, living in society, we should share the sufferings of our fellow citizens and practice kindness and tolerance not only towards our loved ones but also towards our enemies. This is the test of our moral strength. We must set an example by our own practice, for we cannot hope to convince others of the value of religion by mere words.

We must live up to the same high standards of integrity and sacrifice that we ask of others. The ultimate purpose of all religions is to serve and benefit humanity. That is why it is so important that religion always be used to effect the happiness and peace of all beings and not merely to alter others.

Human Nature has the innate qualities of love, compassion and patience. We should live in harmony and learn to exist with shared values. Give humanity a chance to survive among us which is fast diminishing.  Give it a power to strengthen our conviction and soul to live together.