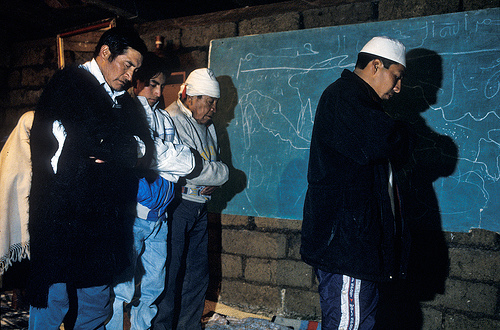 Mexico’s largest Muslim community can be found in the hills of Chiapas, where hundreds have converted to Islam bringing strict beliefs, sobriety and religious traditions to the area. Due to the graphic nature of a goat slaughter for a religious ritual, viewer discretion is advised.

In 1994 two Spanish missionaries arrived in the southern highlands of Chiapas, Mexico looking to convert the local indigenous community, but not to Catholicism: They brought the message of Islam.

Initially, in a region of Mexico best known for the Zapatista revolution, it was a tough sell. First the missionaries tried converting the Zapatista army’s top commanders but when that didn’t work, they turned to local charismatic leaders with social and political influence in the community, winning them over with promises of peace through an ancient faith that could provide spiritual relief from the rural isolation that defined their lives.

Twenty years later, the local mosque has around 500 members, making their tiny village Mexico’s largest indigenous Muslim community. In a region sometimes known for “religious nomadism” — the constant switching from one religion to another which is a common practice in Chiapas – Islam has taken root.

Family after family — all Mayan descendants from the Tzotzil ethnic group — have turned away from their past religious traditions and committed themselves to the strict tenets of Muslim life. Islam in this particular community has provided its members with a new sense of empowerment, a set of conduct rules like strict hygiene habits and a change of behavior like quitting alcohol consumption that has resulted in the decrease of domestic violence and a sense of inclusion and self-worthiness for women.

Mustafa Checheb and his family were some of the earliest adopters. A charismatic soccer fan and father of six, he describes himself as a lost soul, put on the right path by Allah.

“The question is not why have I been looking for God all these years, the question is how can you all live your lives without searching, without believing,” he says.

Cherished and respected by the rest of the community, Checheb and his family are eager to continue the tradition. For a place where connections to the world are rare, Checheb boasts that his son recently traveled to Spain to further educate himself so he can teach Islam to his neighbors with a higher degree of education. Critics of the faith, he added, just don’t understand the power of God’s truth.

“I don´t care what they say, Allah is more powerful and mighty than any little f***er whose own arrogance makes him feel like God,” he adds.