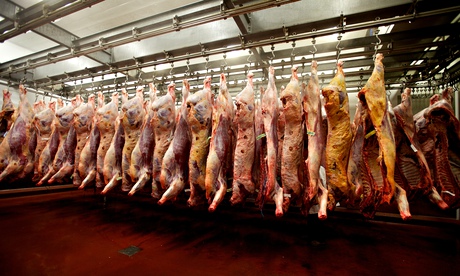 If, after raising the issue for almost three decades, the British Veterinary Association was beginning to despair of ever securing front-page coverage for its campaign to ensure all animals are stunned before slaughter, it can breathe a sigh of relief. But probably a very short and shallow one.

Thanks to the interview its new head gave to the Times picked up by the Today programme and countless others – the matter is now nothing if not high-profile. And, coming weeks after Denmark in effect outlawed kosher and halal slaughter, it is certainly topical, which may explain why the BVA’s president-elect, John Blackwell, judged it a more alluring target than even the government’s badger cull.

Blackwell’s suggestion that the UK “may well” have to follow Denmark’s example if British Jews and Muslims refuse to allow animals to be stunned before they are killed did not please the groups concerned. Nor did his assertion that cutting the throat of an animal without stunning it caused prolonged and unnecessary suffering.

Although the BVA is a seasoned campaigner on the issue – and has also urged the government to label non-stunned meat to alert consumers to its origins – Blackwell’s intervention has met with a swift and furious response from Jewish and Muslim groups, who argue their long-practised methods are completely humane. They have also hinted his comments could be used by far-right groups to stir up community tensions.

“He has made the extraordinarily misleading statement that what Jews do and Muslims do is to slit animals’ throats and allow them to bleed to death,” said Jonathan Arkush, vice-president of the Board of Deputies of British Jews. “That is unbelievably misleading because he must know that the way the animal is killed is to cut its throat so as to bring about an immediate and irreversible loss of sensation and death.”

Suggestions that the animal had its throat cut “and you just watch it while it bleeds to death”, said Arkush, were pejorative, misleading and “could not be further from the truth”.

Shimon Cohen, campaign director at Shechita UK – which campaigns for the right to carry out Jewish religious slaughter – described Blackwell’s calls as “an extraordinary dereliction of duty” and asked why he had decided to focus on an issue that affected only a tiny minority of animals.

“The fact is that religious slaughter is at least as humane as the industrialised methods used in conventional mechanical slaughter, which include electrocution, gassing, shooting, trapping, drowning and clubbing,” said Cohen. His views were echoed by Arkush, who said that 9% of animals in the UK were mis-stunned, causing them pain and distress before slaughter, adding that European veterinary bodies put the figure at around 31%.

“Let’s call it 9%: in this country, the total number of animals who suffer mis-stunning exceeds the whole number of animals killed for the kosher market by a factor of 10,” he said. “If you’ve got 10 times as many animals mis-stunned as you have kosher, surely you should be attacking that?”

Arkush also said he feared that the Danish government had introduced the ban as a reaction to increasing public discontent over Muslim immigration.

Dr Shuja Shafi, the deputy secretary-general of the Muslim Council of Britain, said he was disappointed that the issue of religious slaughter had been brought up yet again. “Halal is a humane method; it’s a clean, clear method and has got rules and regulations about how it’s carried out,” he said. “Stunning has got lots of problems in itself … and if it’s not done properly, actually animals are a lot worse off.”

He also said that focusing on minority religious practices “could give ammunition” to the far right, which already uses halal slaughter as a means to try to attack the Muslim community. “People should be more responsible in how they tackle this. It’s going to cause confusion and will be used by elements to have a negative effect.” Blackwell told the Guardian that while a ban “may well be the end point”, he would prefer to get all the groups involved together so that they could discuss the scientific evidence on stunning. He admitted that human and operator error would inevitably lead to some mis-stunning but said he did not accept that it was as common as had been suggested.

“I’ve heard talk today of anything between 9% and 31%, and I just don’t buy that,” he said. “There are veterinary surgeons working continuously in plants, monitoring the welfare aspects of the animal from the moment it arrives … to the moment it’s killed.”

Asked why he had chosen to raise the issue of religious slaughter rather than comment on intensive farming or the badger cull, he said: “This isn’t a single-policy issue; it’s part of a portfolio of issues. Welfare is very important, if not the most important thing, to veterinary surgeons. It’s almost our raison d’être to try to improve welfare, and as far as animal production goes, we’re concerned with the welfare from the birth of the animal till its final slaughter.”

Blackwell also said that while the BVA acknowledged the sensitive nature of the debate, it was not seeking to stir up a religious or political debate on the issue of slaughter.

“We’re just trying to take the moral high ground on behalf of the animal,” he said. “It’s not about trying to clamp down on people’s very, very well-held beliefs; it’s about moving forward and looking at the issues and seeing that if we can’t have a ban, then how can we fine-tune it so the welfare of the animals is not compromised at slaughter?”

Blackwell’s calls won the support of Compassion in World Farming, which said stunning worked and was merciful.

The response from the Department for Environment, Food and Rural Affairs was rather more guarded. “We respect the rights of religious communities to eat meat prepared in accordance with their religious beliefs,” said a spokeswoman. “There are strict laws in place to ensure welfare standards are met during slaughter.”