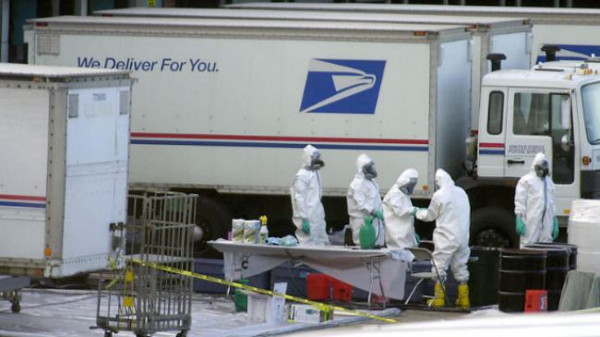 In late September 2001, a couple of weeks after 9/11, the United States was struck with what the Bush regime dubbed a “second wave” of terrorism. Letters laced with deadly anthrax spores arrived in the mailboxes of prominent media figures and two American senators. Five people were killed and 17 others were infected.

A concerted effort was made by the Bush regime and the mainstream US media to present the anthrax attacks as the work of the same people who perpetrated 9/11. They were, in a sense, correct, but the people behind 9/11 and the subsequent anthrax fiasco were not members of al-Qaeda or adherents of the Islamic faith.

A very clear and discernable pattern of propaganda was foisted upon the American public following 9/11. Zionists from Israel and the US took a leading role in assigning responsibility for the biggest attack on American soil since Pearl Harbour. Unsurprisingly, the Zionists immediately pointed fingers at all of their Middle Eastern rivals and adversaries, from resistance groups like Hamas and Hezbollah to countries such as Iraq, Iran and Syria.

Israel’s enemies were being portrayed as America’s enemies too. Together, said the Zionists, Israel and America can defeat “the forces of darkness.” Israel’s crude campaign of innuendo and Orwellian projection manifested within a few hours of the 9/11 attacks. Israeli politicians Ariel Sharon, Benjamin Netanyahu, Ehud Barak and Shimon Peres all made public statements calling on the US and other Western powers to initiate a global “war on terrorism,” a term coined by Likudniks in the 1980s.

Israel’s army intelligence service Aman and the former Mossad chief Rafi Eitan trumpeted brazen disinformation shortly following 9/11, alleging Iraqi involvement in the attacks. In August of 2001 the Mossad delivered a propagandistic “warning” to the CIA alleging al-Qaeda and Iraq were working together and were plotting terror attacks on major US landmarks.[1] The neoconservatives, who are for all intents and purposes emissaries of the Israeli regime in the US, went straight to work in the op-ed pages of the Washington Post, the New York Times and other Zionist-controlled media outlets, attempting to portray Arabs and Muslims generally as the sponsors of 9/11 and the source of all terrorism in the world.

The same pattern of Zionist deception is apparent with the anthrax attacks. Israel’s partisans immediately mobilized a propaganda initiative to link Iraq and al-Qaeda to the anthrax mailings. On various occasions President George W. Bush and Vice President Dick Cheney told reporters that al-Qaeda was likely involved in the lethal mailings. The docile mainstream media unquestioningly repeated this unfounded assertion. A stunning piece of disinformation appeared in an Oct. 27, 2001, report in the London Times, alleging that an Iraqi official met with 9/11 patsy Mohamed Atta in the Czech Republic in April 2001.[2] The report went on to suggest that during the rendezvous the Iraqi official gave Atta a flask of anthrax. The origin of this dubious claim was noted in the article: Israeli security sources. The chief of Czech foreign intelligence, Frantisek Bublan, later revealed that this supposed meeting never took place and was nothing more than a propaganda invention of interested parties. “Promoting a so-called ‘Prague connection’ between Atta and [the Iraqi official] al-Ani might have been a ploy by U.S. policymakers seeking justifications for a new military action against Iraqi leader Saddam Hussein,” Bublan told thePrague Post.[3]

When the Iraq/al-Qaeda propaganda narrative fell apart, the FBI targeted two patsies within the US bio-weapons establishment: scientists Steven Hatfill and Bruce Ivins. The FBI began harassing Hatfill and publicly called him a “person of interest” in the anthrax investigation. Hatfill vehemently denied the charges and was eventually exonerated. He later sued the FBI and other US government agencies, winning a settlement of more than $5 million in damages. Like Hatfill, Ivins was an unlikely suspect for the anthrax attacks as well. There was no evidence tying Ivins to the anthrax letters and he had no conceivable motive. The FBI launched an intense campaign of innuendo against Ivins in an effort to convict him in the court of public opinion. Just before he was set to be indicted and stand trial, Ivins allegedly attempted suicide via an overdose of Tylenol while in his Maryland home and died in hospital shortly thereafter.

Ivins worked at a US bio-weapons facility called USAMRIID in Fort Detrick, Maryland. This is where the FBI claims the anthrax used in the attacks originated. Since there is no evidence that Ivins was involved in the anthrax mailings, there is likewise no reason to believe the FBI’s claim that the anthrax spores used in the letters originated from that facility.

Another curious event took place during the anthrax affair that garnered little attention from the mainstream press for obvious reasons. An Arab-American scientist who worked at the same Fort Detrick facility as Ivins was the victim of an attempted frame-up. Shortly before the first known victim of the anthrax attacks was confirmed, an anonymous letter was mailed to the FBI that attempted to implicate Dr. Ayaad Assaad as a “potential biological terrorist.”[4] The author of the letter claimed to have worked with Assaad previously and alleged that Assaad had a vendetta against the US government, urging the FBI to stop him. The letter prompted the FBI to investigate Assaad. The FBI questioned him in early October 2001 and quickly cleared him of any involvement with the anthrax attacks. Strangely, the FBI seemed uninterested in finding out who sent the anonymous letter implicating Assaad, even though the contents and timing of the letter were amazingly conspicuous, coming just prior to a real bio-terrorist attack. Assaad suspected the letter-writer was involved in the anthrax mailings and opined that his Arab background made him the “perfect scapegoat.”[5]

One possible source of the frame-up letter was a man named Dr. Philip Zack, a microbiologist and Lieutenant Colonel in the US Army. Zack worked at USAMRIID alongside Assaad in the early 1990s. Zack and other employees at the lab formed a clique called the “camel club” to bully Arab co-workers, particularly Assaad. One day in April 1991 Assaad found a poem in his mailbox written by Zack and other members of the “camel club” which mocked his Arabic heritage.[6] Zack and several of his fellow anti-Arab racists voluntarily left the facility when Assaad informed his superiors of the harassment campaign.

In 1992, anthrax spores, Ebola virus and other deadly pathogens went missing from the Fort Detrick facility. An internal investigation discovered that someone was entering the lab late at night to conduct unauthorized research involving anthrax. The inquiry also revealed that Dr. Philip Zack made an unauthorized visit to the lab on Jan. 23, 1992, at a time when he was no longer working at the facility.[7] Despite Zack’s suspicious past behaviour and harassment of Assaad, the FBI made no effort to pursue him as a suspect in the 2001 anthrax investigation.

A very revealing aspect of the whole affair was the fact that the anthrax-tainted letters were made to look like a Muslim who was angry at Israel and the United States authored them. “Death to Israel, Death to America, Allah is Great,” the letters read. Whoever was actually behind the anthrax mailings was evidently attempting to lead authorities to believe a Muslim or group of Muslims was responsible.

So where did the anthrax used in the 2001 attacks come from? Researcher Robert Pate posited a plausible theory in an essay entitled, “The Anthrax Mystery: Solved.”[8] In the paper, Pate suggests Israel is the most likely culprit. According to Pate’s research, Israel had the means, motive and opportunity to secure anthrax spores and deliver them to her targets without being detected. Pate demonstrates that Israel has had a sophisticated chemical and biological weapons program since its inception in 1948. Israel has produced biological agents including anthrax at the Israel Institute of Biological Research (IIBR) in Ness Ziona, located a few miles southeast of Tel Aviv.

Pate cites a research paper by Dr. Avner Cohen titled “Israel and Chemical/Biological Weapons: History, Deterrence, and Arms Control” which outlines Israel’s biological and chemical weapons capabilities.[9] Anthrax is certainly in Israel’s biological arsenal. In the paper, Cohen also describes how Zionist militants poisoned Palestinian water supplies with deadly pathogens during the 1948 ‘Nakba,’ wherein Zionist gangs completely destroyed and depopulated more than 500 Arab villages in order to birth the Jewish state. Historical examples of Zionist biological warfare noted by Pate, in addition to Israel’s penchant for false flag terrorism against its “allies” such as the Lavon Affair and USS Liberty attack, leads him to believe that Israel was willing and able to commit a biological attack in the US – a classic false flag operation to frame her enemies for political gain.

“A motive for the anthrax attacks would be to blame Arab terrorists or a ‘rogue nation’ for this atrocity and to help launch the United States into war against Israel’s enemies,” writes Pate. “[Israel’s motive] in launching the anthrax attacks would be to bring America into war against Iraq and to remove that country as a potential threat to the Jewish state.”[10] As noted earlier, Israeli intelligence contrived a false story to implicate Muslims where they claimed to have observed a meeting between an Iraqi official and alleged al-Qaeda ringleader Mohamed Atta in the Czech Republic in which an exchange of anthrax is said to have occurred. If Israel had nothing to do with the anthrax attacks, then why did they propagate lies with the intent to implicate Iraq and al-Qaeda? American authorities admit that no Muslim or Arab was involved in the anthrax mailings, so who else but Israel and corrupted Americans in the Bush administration could have been behind this obvious false flag?

It can be said without doubt that some members of the Bush administration had foreknowledge of the anthrax attacks. Press reports revealed that White House officials including Bush and Cheney went on a steady regimen of the drug known as Cipro, a powerful antibiotic effective against anthrax infection, weeks before the anthrax-tainted letters were first discovered.[11]

The theory that Israel and its accomplices in the Bush administration launched a biological false flag operation as a “second phase” of the overarching 9/11 deception is well within the realm of possibilities regarding 2001’s anthrax attacks in the US. It is certainly far more plausible than the FBI’s flimsy and still-unproven case against Bruce Ivins who conveniently died before any evidence could be aired in the courts.

But it would be foolish to place any hope on President Obama — a committed servant of the Israeli-American empire — to launch a new, independent investigation into any of these troubling matters.