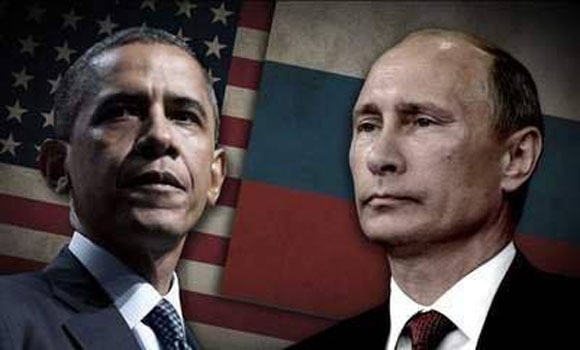 “Information Clearing House – American exceptionalism has gone into overdrive with stern warnings from US President Barack Obama to Russia to respect Ukrainian sovereignty and to not destabilize the region.

Obama has not yet accused Russia outright of “military invasion” in the crisis-torn country, but that was the clear inference from his weekend press conference. In a veiled threat of military confrontation, the American president warned that there would be “costs” for Moscow.

“Any violation of Ukrainian sovereignty and territorial integrity will be deeply destabilizing and the US stands with the international community to affirm that there will be costs [for this violation],” said Obama in a hastily arranged media statement in Washington on Friday.

The White House is obviously rattled by reports of Russian troop movements across Ukraine’s southern Crimean Peninsula. Moscow says that its military presence in the autonomous Crimean republic of Ukraine is fully in accord with a long-standing legal agreement to have its soldiers stationed there as part of its Black Sea naval base.

That agreement was renewed in 2010 between Moscow and Kiev for a further 20 years, affording Russian military presence in the Crimea, particularly the naval base at Sevastopol, which is headquarters for Russia’s Black Sea fleet.

Russian ambassador to the United Nations Vitaly Churkin denied that Russia had invaded Ukraine’s territory and said, “We are operating under this agreement [with Ukraine].”

Events in Crimea took on a chaotic twist in recent days when unknown armed men took over the local parliament and the Russian flag was hoisted. There were also other reports of large troop deployments at the main civilian airport and other facilities. Soldiers were not wearing identifiable uniforms, but there were unconfirmed reports that armored vehicles bore Russian military insignia.

Under the existing military lease of the naval base at Crimea’s Sevastopol, Russia is permitted to station thousands of troops on the Peninsula, and Moscow has in the past routinely engaged in maneuvers there.

However, it is stretching naivety to believe Moscow’s claims that the recent surge in military movements is merely “routine”. The Crimean activity coincides with other large-scale mobilization of Russian troops as well as military aircraft on Russia’s broader border with Ukraine.

But here’s the laughable irony of Obama’s protestations. The latest apparent Russian military moves follow months of US-sponsored destabilization in Ukraine. This illegal and covert American interference has trampled all over Ukrainian sovereignty, which ironically Obama is now accusing his Russian counterpart Vladimir Putin of doing.

Since Ukraine spurned a tentative trade agreement with the European Union at the end of last November, street protests have escalated in the Ukrainian capital, Kiev. Washington and its European allies, including Britain, France and Germany, have done everything to escalate these protests, from high-profile political statements to clandestine military infiltration through the organs of the CIA. The demonstrations in Kiev quickly took on a quasi-military character with sinister fascist elements using firearms and other forms of violence to seize and occupy government buildings. That rapidity betrays the pre-meditated external nature of the “protests”.

There are reliable reports that many of the deaths in clashes between Ukrainian police and protesters were actually caused by Western-backed provocateurs and snipers in a deliberate attempt to inflame the crisis. Washington has infiltrated Ukraine with the CIA and a myriad other so-called “non-governmental organizations” since the early 1990s – with the objective of agitating regime change in the former Soviet Republic.

US State Department official Victoria Nuland recently disclosed that Washington has “invested” some $5 billion in “promoting democracy” (that is, subversion and sedition) in Ukraine over the past two decades.

The crisis came to a head when the embattled elected Ukrainian President Viktor Yanukovych fled suddenly from his office last week and went into exile in Russia. The Ukrainian parliament has since been taken over by his Western-backed opponents and a new interim government installed. Washington and Brussels swiftly moved to recognize this so-called new authority in Kiev, but Russia, with sound legal reasoning, has denounced the sacking of the elected Yanukovych and his government as a coup d’état.

The turmoil in Ukraine has therefore all the hallmarks of a Washington-led regime-change operation. Needless to say that is a wholly criminal interference that makes a mockery of international law. The ultimate target of this meddling, as has been brazenly stated over many years since the early 1990s by Zbigniew Brzezinski and other US imperial planners, is the destabilization of Russia itself.

Risibly, Washington’s new puppet president in Kiev, Oleksandr Turchynov, has now accused Russian forces of “seizing and capturing” the regional parliament and other government buildings in Ukraine’s southern Crimea. This complaint comes from political agitators who used violence and other crimes, including the murder of policemen, to seize government buildings in Kiev, culminating in the ousting of an elected president.

In all this, Russian President Vladimir Putin has maintained a cagey silence. But the Russian leader knows only too well the depth of American deception and hypocrisy, and Washington’s covert agenda for regime change – an agenda which is being ruthlessly pursued against Russia’s Arab ally, Syria.

For now, Moscow seems to be effecting an air of calm legality and playing by the rules, citing that its troops in Crimea are part of its bilateral military agreement with the Ukraine.

But, off the record, the Americans know that what Putin is really saying is this: “You want to break the law, well, OK, we can break it too. Now back off!”

Rules of sovereignty and international law are out the window, and it is Washington and its European puppets who threw all norms out that window with their incessant, illegal interference in Ukraine. Ukrainian territory, and its centuries of shared history, is a vital interest for Russia.

Putin is entirely right to lay down an unspoken military marker to Washington over Ukraine, just like he did when the Americans tried to mess militarily with South Ossetia in 2008 through its NATO proxy, Georgia.

American exceptionalism of arrogance and lawlessness does not understand the language of diplomacy. The only language it responds to is blunt force talking back to force.