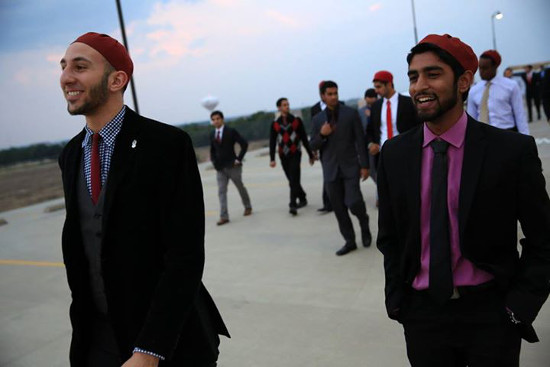 SHORTLY BEFORE SUNUP, a dozen or so students at the University of California, San Diego, stumbled dutifully out of bed. They ironed their collared shirts, knotted their ties and piled into their cars. Their destination was the Islamic Center of San Diego, where they were to be initiated into the country’s first Muslim fraternity, Alpha Lambda Mu, named for three letters that start several chapters of the Quran: Alif Laam Meem.

After the morning prayer, Fajr, the 13 pledges recited a passage from the Quran, then listened attentively as their adviser applied the Islamic values of loyalty, sincerity and brotherly forgiveness to daily life on campus. Finally, the young men pronounced their goals for the coming semester: Rumzi Khan, a computer science major who founded the chapter, vowed to pray more. Several science majors promised to double down on their studying. Samer Abusaleh, a junior in economics, pledged to be more consistent with his Quran reading. He also wanted to work on his six-pack, and not the kind usually associated with Greeks. There was nothing typical about this initiation, which ended over plates of carrot cake pancakes and huevos rancheros at a 1950s-style pancake house. No beer pong. No hazing. None of the raucousness that characterizes frat life.

Alpha Lambda Mu was founded just a year ago by Ali Mahmoud, a junior biology and sociology major at the University of Texas, Dallas, as a national fraternity for Muslim college students. Mr. Mahmoud, who is seeking university recognition and a house for his chapter, hosted the first formal rush this fall: 40 students showed up, and half were offered bids. A total of 24 members now make up the Texas chapter.

Mr. Mahmoud, whose parents emigrated from Egypt before he was born, says he founded the frat to offer Muslim students the chance to express both sides of their identity, the American and the Muslim, at a time when “more and more of us identify strongly with both.”

The directive is for spiritual students to have more fun, and convivial ones to incorporate more spirituality in their lives. Mr. Mahmoud’s guidebook stipulates that chapters organize events every semester. Some are to be purely social, others to teach life skills, encourage volunteer work and enrich members with Islamic culture.

And so the Texas chapter set off in November on a wilderness retreat, with canoeing and cozy campfires on which to roast halal marshmallows, and an imam for lectures and prayers. The new Cornell chapter, which has eight members, threw an all-night party in November. In accordance with Islamic teachings, it was alcohol-free and men only (although chapters are permitted to hold some coed social events, like movie screenings). Two dozen attended the party. They prayed together, downed pizza, played games and crashed in sleeping bags on the floor of the event room the university had lent them.

Members of the San Diego chapter, which started up in the fall, have visited a Halloween haunted house, learned to change a tire, spent a morning plucking debris from a beach in La Jolla and handed out water bottles to the homeless. The members meet twice a month in one another’s apartments to discuss spiritual texts, and they try to gather for at least one of the day’s five calls to prayer. (Mr. Khan had scheduled the chapter’s weekly meeting for 6 a.m. to coordinate with Fajr, but after much griping he moved it to 9 p.m.)

The San Diego chapter, whose members are majoring in intense science, business or tech fields, has already lost four pledges, casualties of part-time jobs and grueling study schedules. Nadir Masood, a senior economics major from the San Francisco Bay Area, had been excited about the fraternity at first. But a 20-hour-a-week job at a clothing store and three high-level classes — two in chemistry — gave him little time for sleep, let alone socializing. “It was a good idea, a good concept to bring the brothers together,” he said. “But I just didn’t have time.”

Still, the idea is gaining traction. Students at Penn State, San Diego State and the University of Florida are hoping to start chapters in the fall.

WITH YOUNG MUSLIMS demanding support, acceptance and greater understanding of a culture that many Americans seem to know little about, the arrival of Alpha Lambda Mu may be less an anomaly than a sign of the times. Researchers who study the ebb and flow of immigrant assimilation say that recent interest in a fraternal identity makes a kind of symmetrical sense.

“I’m surprised it took this long,” said Brian Calfano, an associate professor of political science at Missouri State University who has conducted extensive research on Islamic and American identities. “The fraternity itself is a hallmark of the modern American college experience,” he said. “In other words, these students are saying: ‘We want to live out our identity. We want to be protected within our group. But we also want to exercise our capacity to enjoy our college life.’”

Sometimes referred to as the post-9/11 generation, Muslim-American college students say they have long struggled with the prejudices and suspicions that have come with the West’s unsettled relationship with the Arab world. This has led them to explore more thoroughly their dual identity, and to strive to show the world who they are and how they want to be perceived, said Lori Peek, the author of “Behind the Backlash: Muslim Americans After 9/11.” “The formation of a fraternity represents a really thoughtful reflection on their part,” Dr. Peek said. “It moves these students out of the private sphere and into a more public space where they are effectively spanning two cultures.”

Two reports by the Gallup Center for Muslim Studies indicate that an evolution has indeed occurred. In 2009, 40 percent of Muslim Americans ages 18 to 29 said they were thriving, the lowest percentage in that age group. By 2011, 10 years after the terrorist attacks, that number had risen to 65 percent.

Only 1.4 percent of American college freshmen are Muslim, according to a Higher Education Research Institute survey in 2012, up from 0.9 percent in 2005. But with growing interest in Islam, more campuses are providing prayer spaces and cultural centers. In 1999, Georgetown became the first university to hire a full-time imam. In recent years, Yale, Princeton and Northwestern have brought in Muslim chaplains.

The Muslim Student Association, founded in 1963, is the voice of this movement and now has more than 200 affiliated chapters in the United States. It has pushed for greater awareness about Islamic culture and helps members procure scholarships and internships. The group has generated controversy as well. The chapter at the University of California, Irvine, was suspended for the 2010 fall semester after members protested a campus speech by the ambassador to Israel. And in 2012 the organization made headlines, and elicited sympathy, amid reports that the New York City Police Department had surreptitiously monitored chapters at Yale, Columbia and other East Coast campuses.

Fraternity organizers have close ties to their M.S.A. chapters. But Alif Laam Meem, they say, is not political. “This is about having a strong bond with people,” said Hares Sadat, the San Diego frat’s adviser. “I think that’s the difference.”

MR. KHAN AND THE PLEDGES recently gathered at a frozen yogurt shop a few minutes from campus. In sweatpants, hoodies and sneakers, they talked about why the fraternity idea appealed to them and about “sahaba,” the Arabic word for companions.

“Companions are very valuable in Islam,” said Haroon Masood, who is majoring in neuroscience and physiology. “They keep you in check. We believe your character is strongly influenced by who you hang out with.”

Shortly after arriving at college, Mr. Masood, who is Pakistani-American, said he realized how tricky it was to navigate the campus social scene and still stay faithful to his Islamic roots. Not only were fraternities out, but most parties, too, because so many of them included drinking, which is prohibited by his religion. At the onset of his freshman year, Siyam Hossain, a Bangladeshi-American majoring in economics, found himself playing the dreary role of “D.D.,” or designated driver, babysitting drunken friends. “I was with my non-Muslim friends and I had to automatically take the role,” he said.

Mr. Khan found himself in that position one freshman weekend, too, tending to an inebriated roommate for hours. “He was in the bathroom yelling, ‘Rumzi, save me,’” he said. The next weekend, Mr. Khan decided to turn Friday and Saturday nights into his gym time.

Challenging them further,the pledges say, is the need to constantly explain to other students what they can and cannot do, the no-drinking, the no-pork, the fasting and the praying. “You can feel like maybe they are judging you,” Mr. Hossain said. “And they feel like maybe you are judging them.”

And then there are the deeper reasons for wanting to bond. The pledges share a collective understanding of what it means to straddle cultures. They easily switch in conversation from Xbox games and 49ers football to the importance of praying and challenges of fasting during Ramadan on a campus brimming with fast-food outlets. Most come from close communities, and several attended mosque schools until being exposed to more traditional American life in sprawling public high schools.

They have remarkably similar memories of the fallout of 9/11, having witnessed their parents turning inward amid fear of being watched. Mr. Khan, whose parents immigrated to the Bay Area from Pakistan in the 1980s, remembers going to the mall with his sister and mother, who both wear hijabs, and being eyed suspiciously by other shoppers. He remembers families being flagged by airport security personnel when traveling.

The young men let off steam with private jokes that may be only half in jest — “Don’t forget to shave!” when a friend is planning a plane trip, or a quip about government surveillance when someone mentions a chemistry class explosion or inadvertently uses the word “bomb.”

Mr. Khan is chatty and popular, as evidenced by the number of students who approached him in the yogurt shop. But even he says, “You want to have a space where sometimes you don’t have to explain anything.”

He hopes the fraternity will serve as a networking tool, helping members land jobs, secure promotions and stay connected with the University of California well past graduation, in the way traditional frats support and assist their alumni.

In the meantime, he wants the fraternity simply to build memories, and offer Muslim students a part of campus life that until now has been incompatible with their religious convictions. “When you come to college, you want to have an experience,” Mr. Khan said. “It may not be the same experience that non-Muslim college kids have. But you still want to have one.”