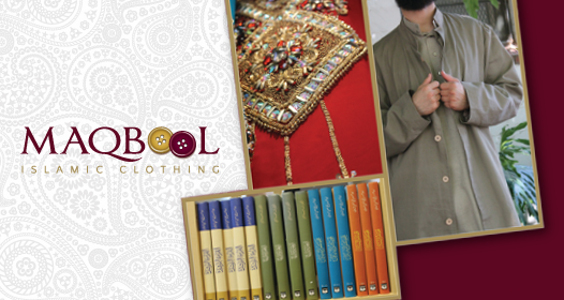 Jabir Tarin, 22 year old California State University graduate and founder of Maqbool Islamic Clothing shares with us his perspective on the Muslim male counter-culture in Islamic clothing and fashion in the U.S..

Growing up in the 90’s, the extent of Islamic clothing was that either someone brought some clothes from overseas, or you had your traditional cultural clothing and most of the time it was only for women. There was your occasional book store that had one or two garments, but quality was terrible and the prices were always sky high.

As a youngster trying to reconnect with my faith, I had been ripped off trying to buy proper Islamic clothing enough times to where I had firmly intended to make a difference, to bring change. And that’s where my research and love and inspiration for Islamic clothing grew.

The establishment of an Islamic Clothing store for not just a particular cultural group, men or women exclusively, was the main goal behind this intention. My brother and I had desired long ago to open a store where you could freely shop and find the best in clothing from all over the world in an organized, conducive environment. Similar to any big box retail clothing store in the mall.

It’s been two years since our establishment has opened and it truly has changed the Islamic clothing culture in the Bay Area in Northern California. We are the first fully Islamic clothing store without particular cultural biases in clothing type, we carry brands from all over the world that normally you would not find, at reasonable prices for people of all ages. Seldom you will find clothing for tall/large men and women in your local shop. Maqbool Islamic Clothing has changed that by providing clothing for all sizes.

The struggle for the youth to reconnect to their faith has been challenging to say the least, but when the Muslim community comes together and begins to wear modern Islamic clothing as is apparent in the brand Lawung or Kamani, you see people sincerely interested in shopping at Maqbool Islamic Clothing.

Some like the traditional look, we carry Al Daffah and Al Aseel for that. The ladies appreciate a modern abaya (dress) with colors and patterns as well, and that’s where Silk Route comes in. Dozens of younger girls adore the stylish and colorful designs that Silk Route has come out with, and the traditional ones as well. And for the more traditional look for the ladies, Al Karam a famous traditional women’s brand from Jordan is also available in all sizes and variations.

It is the focus of Maqbool Islamic Clothing and it’s friends to start this movement to reconnect with their Muslim community. Whether it’s the youth, or the elders in the community, we have hope that by reconnecting and reestablishing their link with quality, desirable Islamic clothing that the Muslim male and female establishes an identity and culture that even those who don’t share the same faith would pleasantly adopt.

We consider it our magnum opus and lifework to provide the Muslim community the ability to wear exquisite and fine clothing and to immerse themselves in a look which defines them as Muslims living in America. Although for many years the struggle has been tough, a new light dawns on the era of the Muslim in America.