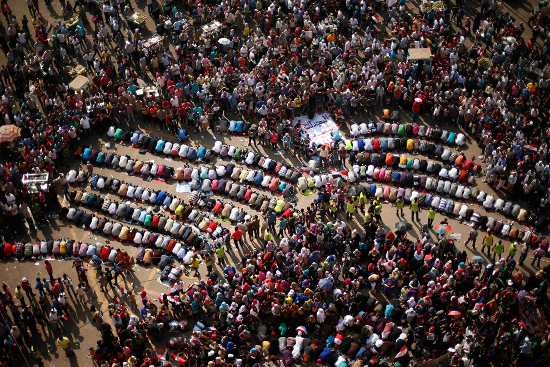 Prayers at a protest in Tahrir Square.

I’ll start on a personal note. I’m writing this commentary with a sense of unease and cautiousness. I’m a foreigner living in Egypt, and intend to write about political issues related to the host country. As long as foreign journalists are in jail for doing their work, this prudence is in order. I’m not a correspondent. I could call myself an analyst. Apart from personal vanity which drives more or less all authors, the objective of my writing is to inform the interested audience Egyptians here, Germans and others back home. I head a liberal German institute which sponsors civic education projects in the MENA region. It is part of my daily routine to initiate and overlook political dialogue activities between Europeans and Arabs, among them many Egyptians. This job has not become any easier in the past couple of months. I’ll try to explain why this is so here.

Looking back the past couple of years, the schism between mainstream public and publicized opinion in Egypt and the Western world has never been as deep and obvious as today. In a climate of suspicion and distrust, foreign correspondents have become objects of vilification, attack, legal action and incarceration. We have witnessed perverse instances of enraged mobs attacking foreign reporters in the heart of Cairo. This is unacceptable under all circumstances. Attacking foreigners is also highly un-Egyptian. I don’t like stereotyping people along national lines, but I assume many would agree that foreigners have fallen in love with Egypt mainly also for the kindness and hospitality of her people. Recent excesses endanger this trademark image.

Much of what is happening in Egypt is hardly explainable reasonably.  It is not reasonable to pick a fight with foreign correspondents when you’re in need of foreign tourists.  But that’s just one of the many mysteries.  Among the biggest puzzle of Western observers is the positioning of Egypt’s mostly secular, often self-proclaiming liberal elite concerning recent political developments. With very few exceptions, this sociological class has vowed nearly unconditional support to the authorities’ “fight against terror”. Opposition to terrorism should be a position that unifies all democrats. However, it is disheartening to see how many here look the other way when it comes to disregard for due process, proportionality, accountability of state action and human rights violations.

“Only a dead Islamist is a good Islamist”. I shuddered when I read this Facebook message by a young leader of a secular political party. A few days earlier a senior member of that group posted the following: “We will fight with whatever we have, we will arrest as many as we can and we will also kill as many if needed but please don’t talk to us about inclusion and reconciliation! Don’t talk to us about human rights and Amnesty International reports because frankly we don’t give a damn!”

Words like these also reflect the alienation between an important segment of Egyptian society and their traditional Western allies. Never have I sensed a stronger estrangement between the two than in these times. I don’t believe turning away and stopping to communicate and cooperate is an option. There exists no alternative to dialogue. For this, it is an essential condition to understand the other.  On my quest to comprehend what is occurring in the hearts and the minds of many Egyptians I have become estranged with post 30 June, I saw the explanation of Lebanese columnist Rami Khouri. After his visit to Egypt in January, he wrote: “What we witness these days in Egypt cannot be analyzed by using political criteria, but rather requires the tools of the anthropologist. There is no real political ideology involved here. There is mainly biology driving events these days, primarily the anthropological need of tens of millions of Egyptians to get on with their lives and prevent the collapse of this society that has functioned without interruption for over 5,000 years.” The public sphere in Egypt, Khouri continues in his commentary, is “overshadowed by the herd and its need for self-preservation”.  This analysis reminds me of Egyptian commentary justifying the forceful elimination of Political Islam as a matter of survival and protection of Egypt’s identity. This perspective tends to deny the Egyptian identity of the Islamist forces and the many victims – and opens the door to highly illiberal, if not totalitarian conduct.

While the “anthropological” approach is fascinating, it may lead to racialist, if not racist conclusions.  It also leads away from the roots of Egypt’s political and societal degradation: like in other underdeveloped societies, it is not the miserable and disenfranchised masses who determine the public and even less so the publicized opinion. With very few exceptions, Egypt today is void of responsible democratic media. In a nearly totalitarian media environment (with Orwellian spikes here and there) public opinion has become a mirror of publicized opinion. I find it frightening to witness that many Egyptians actually believe all the flimflam they are told to believe by those controlling the media.

A prime object of a seemingly coordinated disinformation and defamation campaign are those who stood at the forefront of the revolution in early 2011.  In a depressing Op Ed in The New York Times, Egyptian novelist Alaa Al Aswany bemoans a “tragic turn of events” and “a systematic media campaign carried out by state television and the private channels owned by businessmen who used to back the Mubarak regime” aimed at conveying the fable that the January 2011 revolution “was a plot by American intelligence agencies” who cooperated with the young revolutionaries who acted as “traitors and paid agents of the West”.

To add insult to injury, only few Egyptian voices are heard in solidarity with the objects of defamation who have been effectively marginalized politically, or criminalized and silenced.

These days, many columns on Egypt end with a reference to the youth and express the – unsubstantiated – hope all will be better if only the youth gets its say on a latter day. In his column “Egypt’s Despair and Its Hope”, Alaa Al Aswany follows the same paradigm. Unfortunately, reality is more complex.  Egypt’s progress is not a biological automatism of the old and corrupted elites dying out. For this country to change to the better, a real revolution is needed. This must begin in the minds and heads of the people. It’s about the education, stupid, one could say. If radical changes don’t occur here, Egypt’s masses will always be in danger to behave in an “anthropological” manner – estranged from democratic, let alone liberal principles.