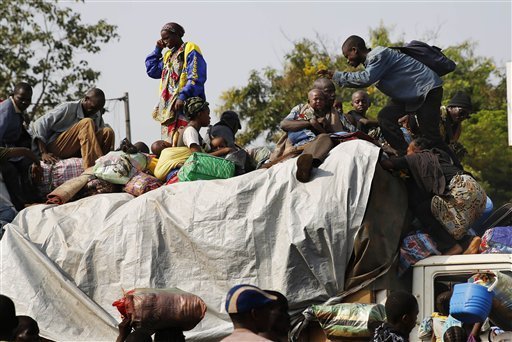 By: JEROME DELAY AND KRISTA LARSON

BANGUI, CENTRAL AFRICAN REPUBLIC — Thousands of Muslims climbed aboard trucks protected by heavily armed Chadian soldiers in a mass exodus Friday from the capital of Central African Republic. Their flight follows months of escalating attacks on anyone perceived as supporting a now-defunct Muslim rebel government blamed for scores of atrocities during its rule of this predominantly Christian country.

In The Hague, Netherlands, the prosecutor of the International Criminal Court announced a preliminary investigation into potential war crimes or crimes against humanity in Central African Republic, saying the crisis has “gone from bad to worse” since September.

Along the streets of Bangui, crowds of Christians gathered to cheer the convoy’s departure for the neighboring country of Chad, which is mostly Muslim. It was an acrid farewell to their Muslim neighbors who had in some cases lived alongside Christians for generations here and have few ties to Chad.

The dangers for those who stayed behind were clear: One man who tumbled from the precariously overloaded trucks was brutally slain, witnesses said.

“He didn’t even have the time to fall — he landed into the hands of the angry mob who then lynched him at the scene,” said Armando Yanguendji, a resident of the Gobongo district who witnessed the horror.

Another truck in the same neighborhood escaped attack from Christian militiamen only when Burundian peacekeepers fired into the air to disperse the crowd trying to assault the convoy, he said. Some trucks broke down even before they could leave Bangui on Friday and had to be abandoned. The passengers jumped aboard other trucks, facing constant jeering, threats and stone-throwing from the spectators.

“The Christians say the Muslims must go back where they came from — that’s why we are going home,” said Osmani Benui as she fled Bangui. “We couldn’t stay here because we had no protection.”

They did have protection as they departed. Chadian special forces went along as well as Seleka rebels in cars, armed with pistols and AK-47s. The convoy of some 500 cars, trucks and motorcycles strained under the weight of people’s belongings.

The aid group Medecins Sans Frontieres, or Doctors Without Borders, said Friday that tens of thousands of Muslims have now fled to Chad and Cameroon. The U.N. refugee agency said that almost 9,000 people have fled to Cameroon in the last 10 days, bringing the number of refugees in Cameroon to 22,000 since current began.

“It really is a horrific situation. All over Bangui, entire Muslim neighborhoods are being destroyed and emptied,” said Peter Bouckaert, emergencies director for Human Rights Watch, who has gotten trapped Muslims to safety under the guard of peacekeepers.

“Their buildings are being destroyed and being taken apart, brick by brick, roof by roof, to wipe out any sign of their once existence in this country,” he added.

But the dangers are not limited to the capital. Entire communities remain trapped in parts of northwest Central African Republic, according to the Medecins Sans Frontieres statement. A Muslim community of more than 8,000 people in Bouar “remains effectively imprisoned, unable to flee the violence.”

“We are concerned about the fate of these communities trapped in their villages, surrounded by anti-Balaka groups, and also about the fact that many Muslim families are being forced into exile to survive,” said Martine Flokstra, MSF emergency coordinator.

U.N. deputy spokesman Farhan Haq said that nearly 840,000 people remain displaced inside the country, and “with no immediate prospect to return home as the rainy season begins, the refugee agency fears a worsening crisis.”

The U.N. refugee agency warned of a high risk of cholera and other public health problems, particularly in Bangui, where more than 413,000 people still live in makeshift sites.

In announcing the International Criminal Court’s preliminary investigation, prosecutor Fatou Bensouda cited reports of “hundreds of killings, acts of rape and sexual slavery, destruction of property, pillaging, torture, forced displacement and recruitment and use of children in hostilities.” She added that “in many incidents, victims appear to have been deliberately targeted on religious grounds.”

The ICC is the world’s permanent war crimes tribunal, established in 2002 to investigate and punish atrocities when member states are unwilling or unable to do so themselves. Central African Republic is a member.

Although most of Central African Republic’s roughly 4.6 million citizens are Christian, there is a sizeable Muslim population in its north near the borders with Sudan and Chad.

Fighting in the country has worsened since last March, when an alliance of Muslim rebel groups from the north united to overthrow the president of a decade.

Although their grievances were political and economic — not religious — fighting has taken on an increasingly sectarian tone since then.

The rebels, known as Seleka, were aided by Chadian and Sudanese mercenaries. They quickly became despised by Christians in the capital after the fighters went on looting sprees, raping and killing civilians at random. An armed Christian movement known as the anti-Balaka, aided by loyalists of ousted President Francois Bozize, began retaliating several months later.

Christian fighters attempted to overthrow the Muslim rebel government in early December, sparking unprecedented bloodshed that left more than 1,000 people dead in a matter of days. An untold number have died in the weeks that followed, with most of the attacks in Bangui targeting Muslims.

The Muslim rebel leader who took power last March has stepped aside, and the country is currently being led by former Bangui Mayor Catherine Samba-Panza as interim president.

In recent weeks, angry mobs have set fire to mosques and have brutally killed and mutilated Muslims. On Wednesday, one Muslim suspected of having aided last year’s rebellion was attacked for 15 minutes with knives, bricks and feet by army soldiers shortly after Samba-Panza had left the scene. Men in uniform then paraded his body through the streets before it was dismembered and set ablaze.

No one was detained in connection with the slaying, which took place in the presence of African regional peacekeepers.

“It is very unfortunate that that happened, that we were not able to quickly intervene and then save him, but things happened so quickly that we couldn’t,” said Eloi Yao, spokesman for the African mission known as MISCA.

Babacar Gaye, the U.N. special representative to Central African Republic, called for an investigation and said those responsible “should be made an example of.”

Wednesday’s attack came minutes after the interim president told the hundreds of soldiers standing in formation that she was proud of them. She called on their support to bring order to their anarchic country.