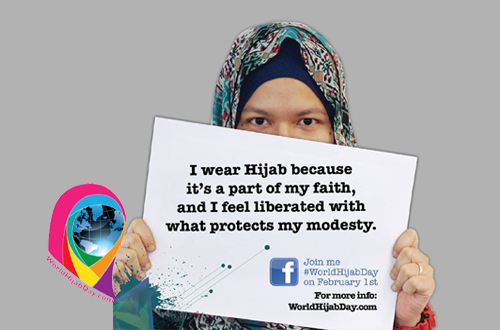 On February 1st, women from all regions of the world celebrated World Hijab Day. But is it something praiseworthy or blameworthy in the religion?

Celebrating world and national Days and events that promote universal values and morals are praiseworthy. It couldn’t be condemned or depicted as unlawful bid`ah (innovation in religion).

Dr. Wael Shihab, PhD in Islamic Studies, Al-Azhar University, and the Head of the Shari`ah Dept. of Onislam.net website, stated:

In fact, the core meaning of the prohibited bid`ah in Islam is to introduce or invent a devotional or ritual act of worship into religion with no backing from Shari`ah. It is not acceptable, for instance, for anybody to invent a new form of salah (prayer); it would be unlawful bid`ah. `Ibaddat (acts of worship and religious rituals) should be founded on correct Shari`ah proofs.

World Days and events—such as the World Hijab Day or Orphans Day—are mostly based on cultural and social considerations. They are not meant to introduce new religious rituals or devotional acts of worship.

Muslim communities may participate and promote World Days or events that have noble goals. This is considered as cooperation in goodness. Allah Almighty says, {Help you one another unto righteousness and pious duty. Help not one another unto sin and transgression, but keep your duty to Allah. Lo! Allah is severe in punishment.} (Al-Ma’idah 5: 2)

The World Hijab Day aims at, among others, supporting Muslim women’s right of wearing hijab and raising awareness regarding its morals and merits.

It is absurd, therefore, for anyone to claim that it is bid`ah to promote such good goals of the World Hijab Day. It is a social event that aims at supporting universal values and morals.

May Allah accept your and our good deeds!