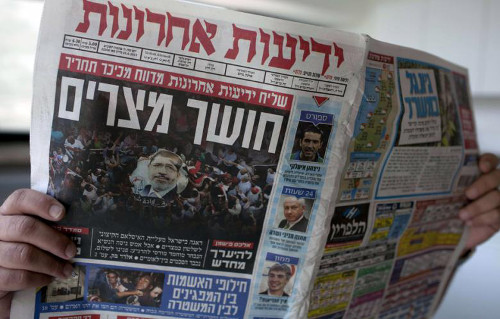 Although Israeli law considers racial incitement illegal, the Israeli media consistently provides a platform for extremists who commit racial incitement against groups that Israelis perceive as an “enemy,” especially the Palestinian people.

Based on the results of monitoring the mainstream Israeli media (secular and religious), conducted over two years, this article addresses the most prominent cases of racial incitement against Arabs and Muslims, justified by biblical texts and fake historical facts. Every day, the Israeli public is exposed to ideas in the media which influence their perceptions of Arabs and Muslims and solidify existing negative views.

The trend of viewing the conflict through a religious lens revives, reproduces and distributes religious myths of a perpetual conflict between two sides: one symbolizes “good” and the other “evil”. The superior side faces an enemy haunted by inferiority, motivated by envy and jealousy, and driven by a deep wish for revenge.

Explaining political and sometimes tragic incidents in such terms has become part of the Israeli political culture, as expressed in the following quote: “Incapability, frustration, and a sub-conscious sense of inferiority towards Jews have deeply affected all Muslims, turning them slowly into maniacs. It is the war of Ismail against Isaac. It is a war until the elimination of the last Jew” (Yaakov Schoenfeld, published on March 30, 2012 in Hamodia, defined as “the daily newspaper of Torah Jewry”).

In an article by Ariel Kahana, published in a newspaper called Makor Rishon on March 14, 2011, we read: “This is what history has shown us, Murder is an innate feature of the Arab people, at least since their path crossed with the path of the Jewish people. This is their character. Jews behave according to ‘one hand raises the message and the other works’, the Arabs react out of ‘will be a brutal man’. This is their character, these are their traits”.

Many authors call the Arabs “Ismaelites” when they want to express contempt, as we see in an article by Avi Bentov: “So, these are the Ismaelites, the brutal, the bloodthirsty, worse than animals of a forest, some who eat and some who get eaten. One animal kills the other when it is hungry and also to feed its offspring. Animals don’t kill humans without reason, but Arabs do, as they live on the ruins of their victims, the knife in their left hand. They are stupid, and their hands are soiled with the blood of our beloved” (published on the Kikar Hashabat website on March 27, 2011).

Another article by A. Yizhaki, responding to the assassination of the Arab-Jewish movie director Juliano Mer-Kamis in Jenin, stated: “In recent years, the director Juliano Mer-Khamis met his calling in the Jenin refugee camp. He went to live there and worked to develop Palestinian ‘culture,’ believing it is possible to ‘educate’ the descendants of people the Torah describes as ‘wild.’ Reactions from leftist Jews prove that they do not know the truth about the character of their subjects in Ismail’s camp. The Palestinian culture of killing, or generally speaking, the Arab culture of killing, strikes very deep. It is so deeply rooted that the Israeli left is not capable of perceiving it as a serious matter” (published in Yated Nee’man on November 4, 2011).

Racism and incitement in the Israeli media are not only directed towards Arabs but also at Muslims. The Israeli media demonizes Islam, falsifies historical facts, and takes verses from the Qur’an out of context.

For instance, in addressing the case of Israeli soldier Gilad Shalit, Dr. Reuven Barco claims that the conduct of Hamas is affected by the “low morals” of the prophet Mohammad: “In addition to a…heritage of violence, the bearded Hamasnics of Gaza, in their operations against Israel, apply two main lessons of the failed siege which Mohammad conducted against Taeif, the city of the ‘infidels’. He threw huge stones, injuring civilians, women and children without discrimination”. (Published in the daily newspaper Yesrael Hayom on October 19, 2011)

On March 22, 2012, the newspaper Hamodia published an article by M. Shalom, saying: “The world knows how to shut up and ignore when the Jews in Israel defend themselves against those products of Islam, the brutal anti-Semites with their insatiable hunger for terror. Worse still, this world condemns the Jews when so-called ‘innocents’ get killed and the Jews are trying to defend themselves.”

Another report in the same newspaper says: “Islamic terrorists are running a global war. Throughout our painful, bloody history, Jewish children were at the top of the killers’ list. Today Arabs and Muslim carry the cross of this bloody campaign”.

A website called “News1” published an article by Yehuda Drori on January 29, 2012, describing Islam as the “devil’s religion.” Drori wrote: “Some people might disagree with my view of Islam as a violent, bloody religion. In order to read about a loving and peaceful Islam, those who disagree have to look towards tolerant academics living in the West, but we know Islam better than them! I can understand how difficult it is for a leftist to adjust his attitude and accept the awful truth: There are no ‘good’ Muslims. The only goal for Arabs, here at least, is to eliminate us. They constantly promote this idea in their media with non-stop incitement against us. Islam is the devil’s religion”.

The theory of a “super race” descending from Isaac – as opposed to an “inferior race” descending from Ismail – is usually accompanied by the theory of the Jews as “God’s chosen people” and their religious superiority over the “gentiles.” Numerous Israeli writers are convinced that Jews are a “chosen people,” superior to non-Jews religiously and culturally.

In Yesrael Hayom on October 19, 2011, Reuven Barco confirms the racial superiority of Jews over Arabs – the latter of whom he calls “the strain of Hagar the slave” – and the religious superiority of the “chosen people”. He writes: “the Palestinian prisoners go on a hunger strike with an incredible sense of insolence; they demand rights to welfare, education, food, visits from family members, and watching media. This proves that somewhere in the back of the Palestinian’s brain is an implicit recognition of Jewish superiority. They are right; there is a substantial difference between the Jews and the Palestinian Islamists. We are not only talking about Jewish accomplishments in science and the Nobel Prizes won by the chosen people; we are basically talking about Jews who value life compared to the death industry produced by the Islamists”.

The Israeli media carelessly express extremely racist insults towards Islamic culture, and won’t allow facts to melt their entrenched stereotypes. One example is found in Yated Nee’man on March 26, 2012: “As a rule, the Islamic culture thoroughly suppresses citizens’ rights wherever they live. It is a culture of terror, racism, humiliation and suppression. Whoever tries to speak up is immediately decapitated”.

In the editorial of the same newspaper, on March 25, 2012, we read: “It is also true that many immigrant Muslims have managed to integrate into their new countries, but those who cling to an ideology that wishes to conquer the whole world and put it under the shoes of Mohammad’s destructive religion, are definitely not a minority”.

In another article written by M. Shalom, we read: “Lying and deception are the most prominent characteristic of the Arabs. They are firmly rooted in Mohammad’s religion. The Quraysh Covenant proves that deception is allowed – and even required – on the way to defeating the enemy and accomplishing goals”. (Hamodia, May 30, 2011)

It is considered “racist” to oppose occupation and demand that Israel withdraw from the occupied territories. On December 15, 2010, Professor Hillel Weis wrote in the religious newspaper Makor Rishoan that “Islam turned out to be a boot trampling on Europe. European leaders demand that Israel evacuate form Jerusalem. That’s racism! Those who invented the term ‘racism’ have adopted it.”

On June 22, 2012, Yaakov Schoenfeld published an article in Hamodia in which he says, “This animal-like thirst for blood drives Muslims crazy. It seems that Muslims are frustrated, attempting suicide and taking the whole world down with them. It seems that history has never witnessed the sort of madness that Islam is exhibiting, as a religion of killing and destruction”.

Racial incitement is not absent from the secular Israeli media. As we pointed out earlier by referring to the “News1” website, we now look to Ha’aretz, a paper known for its liberal and leftist views. In an article published on March 17, 2012, the journalist Yisrael Harel wrote: “Those who believe that peace is possible and that the Palestinians are partners should be the first to tell the truth about Palestinian incitement. It’s not possible to prove a direct relationship between the killings in Itamar and daily incitement. The reasons are deeper. Over the years whole villages have been slaughtered in Algeria – about 300,000 victims – and thousands of infant throats slit. In Darfur, Lebanon, Syria, Iraq, and elsewhere in the Muslim world, people have been massacred. These killings are the outcome of a murderous character, not the incitement led to them”.

Severe cases of racism also exist, such as the words of the right-wing radio broadcaster Avery Gila’ad. On June 12, 2012 he said: “we don’t want to forget that those who are knocking on our doors are followers of Islam, and that Islam is a disease rampant in the world. The fact that Islam dominates the world and we see it everywhere, and in light of Muslims’ wish to impose their thoughts and beliefs, we must be careful in managing our lives”. (From Gila’ad’s program “The Last Word,” broadcasted on Galle Zahal, the radio of the Israeli army).

Following this incident, which aroused much anger, protesters took to the streets, and a complaint was filed with to the government attorney general. Unfortunately, as usual, none of these actions resulted in any changes.

This supposed “religious-ethnic superiority” is merely an attempt to legitimize the Israeli occupation and the crimes committed against the Palestinian people. Legitimization occurs by dehumanizing and demonizing the “enemy.” Those who emphasize a demonic image of Islam are attempting to justify the Western wars against Muslim and Arab countries under the pretext of battling the so-called “global Islamic jihad.”