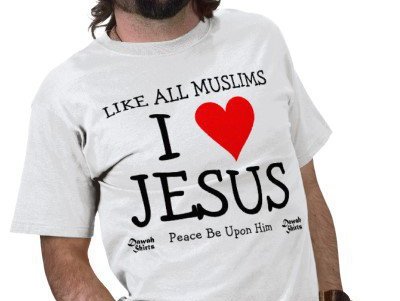 She was alone, as she was wont to do, worshiping in the eastern section of the temple. Suddenly, she was startled by a strange presence: a man with whom she was not familiar. “I seek refuge from thee with the Most Gracious,” she said, “(Approach me not) if you are conscious of Him!” He sought to calm her by saying, “I am but a messenger of your Lord, (who says,) `I shall bestow upon thee the gift of a son endowed with purity.’”

This startled her most of all. She replied, in shock: “How can I have a son when no man has ever touched me? – for, never have I been an unchaste woman!” The presence replied: “Thus it is; (but) your Lord says, `This is easy for Me; and (thou shalt have a son,) so that We might make him a symbol unto humanity and an act of grace from Us. And it was a thing decreed (by God).”

And so she conceived the child, withdrawing to a far-off place. And when the pangs of childbirth overtook her, she was driven to sit under the trunk of palm tree, and she exclaimed in anguish: “Oh, would that I had died before this, and had become a thing forgotten, utterly forgotten!” Yet, she had the child, and she then came back to her people carrying him, who were clearly shocked.

They exclaimed, “Thou hast indeed done an amazing thing!” They continued: “O Sister of Aaron,” an honorific title for this heretofore pious woman, “Your father was not a wicked man, nor was thy mother an unchaste woman!” She pointed to her newborn child, whereupon they said: “How can we talk to one who (as yet) is a little boy in the cradle?”

The child then said:

Behold, I am a servant of God. He has vouchsafed unto me revelation and made me a prophet, and made me blessed wherever I may be; and He has enjoined upon me prayer and charity as long as I live, and (has endowed me with) piety towards my mother; and He has not made me haughty or bereft of grace. Hence, peace was upon me on the day when I was born, and (will be upon me) on the day of my death, and on the day when I shall be raised to life (again)!

This story, that of the birth of Christ, was culled, not from my copy of the Bible, but rather from the nineteenth chapter of the Koran. It is the second mention, in fact, of this story, the first being in the third chapter. This should come as no surprise, really, for Jesus (and his mother) are very prominent in Muslim belief and reverence.

The Koran is full of passages about Jesus and Mary. The Muslim holy book describes Jesus as being “honored in the world and the hereafter, and one of the intimates of God” (3:45). Christ is also “in the ranks of the righteous” (6:85), described as “a word from God which He send down to Mary (and) and a spirit from Him” (4:171). The Koran even says that Jesus Christ “was strengthened with the Holy Spirit” (2:253, 5:110), although classical exegesis notes that “Holy Spirit” means either divine inspiration or the Angel Gabriel. Jesus, in fact, is mentioned more by name in the Koran than the Prophet Muhammad himself.

That’s why it perplexes me to hear some Christians talk about Muslims “not having Jesus.” We have Jesus all over our faith and belief, we just don’t believe he is the son of God or part of a triune deity. Muslims maintain that Christ was a prophet. It is a major difference in belief, to be sure, but it is not something over which Christians and Muslims should have any enmity or animosity.

Yes, some Muslims claim that Christians and Jews are “enemies,” but I pay no heed to such rabble. It is the product of a criminal, twisted mind, and the overwhelming majority of Muslims do not subscribe to such beliefs. And sadly, there are some Christians who say the same about Muslims and Islam: that we are “enemies,” not to be trusted or accepted into the fabric of society, and our faith is “evil.” Such voices, in both communities, must be ignored and marginalized.

Muslims in fact are awaiting for the return of Jesus and have been ordered to follow him upon his return.

This common love for Jesus – and all the prophets of God – should be the force to bring Muslims and Christians together. As we all think about Jesus this holiday season, it is my hope and prayer that the forces of hatred and division are no longer paid heed, and people of all faiths and creeds come together in peace. I know that it would be what Jesus would want for us; I know that it is what God wants as well.

Jesus DID NOT eat PORK [Levictus 11:7-8]Muslims are forbidden from eating Pork.Jesus DID NOT drink ALCOHOL [Numbers 6:1-4]Muslims are forbidden from drinking Alcohol.Jesus PRAYED in PROSTRATION [Matthew 26:39]Muslims pray in prostration.Mary the Mother of Jesus was COVERED and Christian women are ordered to COVER [Genesis 24:64-5]Muslim women are ordered to cover.Jesus greeted with ‘PEACE BE UPON YOU’ [John 20:19]Muslims greet with PEACE BE UPON YOU (“Assalamu Alaikum”)Jesus FASTED [Matthew 6:16-18]Muslims fast for Ramadan ( a main pillar of Islam) as well as other times during the year.Jesus prohibited INTEREST [Deuteronomy 23:19]Muslims are prohibited from dealing in Interest (taking or giving).

The second coming of Jesus

Muslims believe that Jesus will return at the end of time and will clear all the confusion prevailing in the world regarding his life and mission.

No historical figure has been the subject of as much controversy as Jesus of Nazareth. He is worshipped as the only-begotten Son of God, the Messiah, the Savior, and as God Himself by the Christians of the world.

The Jews believe that he falsely claimed to be the expected Messiah of the Jews.

The rationalists claim that Jesus Christ never existed. According to them, Jesus was a myth, a “fabricated hero”.

Of the dozens of Christian denominations who believe in the second coming of Jesus, the position of the Christian Fundamentalist Churches (or the Evangelicals) is unique.

Their belief system owes a great deal to the Scofield Reference Bible, which was the work of Cyrus Ingerson Scofield (1843-1921), a pastor of the Dallas First Congregational Church. By inserting his own interpretations of particular verses into his Bible, he was able to provide a new narrative to an old story:

Scofield told his audience that the world would end in a final world conflagration called the Armageddon. But, he said, born-again Christians should welcome such a catastrophe because once the final battle began, Christ will lift them up into the clouds.

Thus to the Evangelicals, the most attractive part of the story is that “all true Christians” (meaning the same band of fundamentalist Christians) will be bodily lifted up to heaven during a miraculous event called “the Rapture”, so that they will be spared of the “tribulations” and the trauma to which the non-Christians (who include all other Christians like the Roman Catholics and most Protestant groups) are exposed.

The “dispensationalists” (one group among the Evangelicals) believe in the doctrine of imminent “Rapture”. This, according to them, means that Jesus will come secretly in the clouds and raise dead-and-buried born-again Christians from the dead.

In contrast to the above beliefs, the Muslims hold the following beliefs about the second coming of Jesus:

– Jesus was a real person and a blessed prophet of God who lived some two thousand years ago, preaching to his people, the Israelites.

-Jesus was the Messiah (Masih) prophesied by the earlier Israelite prophets.

– The return of Jesus is a sign of the end times.

– Jesus will clear all the confusion prevailing in the world regarding his life and mission.

– Jesus will follow the law of God as perfected by the final prophet, Prophet Muhammad ( peace be upon him).

About the so-called “crucifixion” of Jesus, God in the Quran says what means:

[And (as for) their saying, “We killed the Messiah, Isa son of Maryam, Messenger of Allah”, …They did not kill him and they did not crucify him, but it was made to seem so to them. Those who argue about him are in doubt about it. They have no real knowledge of it, just conjecture. But they certainly did not kill him. Allah raised him up to Himself. Allah is Almighty, All-Wise.] (An-Nisaa’ 4:157-158)

A close look at the above verses point to the following:

The Romans and the Jews did not kill Jesus; they did not crucify him; but it appeared so. The question is: what happened to Jesus then?

And the answer, according to Islam, is: “God raised him up to Himself.”

Considering the context of the event described, it does not seem reasonable to believe that “raising him up” meant, (as some would argue) elevating his spiritual status before God. We should understand that God saved Jesus from an accursed death on the cross (as the Gospels later alleged).

Moreover, the belief in Jesus’ crucifixion stems from the Islamically unacceptable concept of the inherited sin of mankind. And the concept of blood sacrifice by an innocent Son of God to save sinful man is abhorrent to reason, justice, and the very idea of an All-Merciful God.

And for this reason, the “atoning crucifixion” of Jesus could never have happened. In other words, the truth is what the Quran says that Jesus was neither killed nor crucified.

The Quran and the sayings of Prophet Muhammad support the belief that Jesus will certainly return:

Prophet Muhammad (peace be upon him) said,

By the One in Whose hand is my soul! The son of Mary is about to come back as a just ruler who will break the cross, kill the swine, and cancel the tribute, and money will be so great in amount that no one will be in need of it, and one act of prostration will be more lovable to a person than the whole world and everything in it. (Al-Bukhari)

The foregoing clearly shows that Jesus will return to the earth. But as Islam has been made perfect by God through Prophet Muhammad, Jesus will not make any addition or subtraction to the teachings of Islam. Rather, he will follow the Shariah (Islamic law) of Muhammad.

Muslims do not know when Jesus will come, but they surely believe he will come.